This Pozole Rojo with Pork has got to be one of THE most flavorful soups I have made in a long time. It’s my new favorite. As Dave said, “I could live on this!”

The secret comes from the variety of dried and fresh chili peppers used. I go to a local Mexican market, La Tiendita Mexican Market, they’re always so helpful and what’s even better, they have fresh masa, but you need to order a day in advance. You can also find them in many supermarkets where Mexican food items are located, or online.

You might think because of all the different peppers this would be a hot dish, but it’s the flavors from all the chilies, not their heat, that makes this soup come to life. Don’t get me wrong, this does have a small kick, but not what you’d expect. With the soft hominy and beans, the chunks of pork, which could easily be changed with using chicken, it is a wonderful and filling meal.

In this recipe I chose to cook it on the stove top, but you could just as easily use a pressure cooker and cut the time down considerably. I have included both cooking times and instructions for both Instant Pot and a stove top Dutch oven or large soup pot methods.

Transfer the chiles, 4 cloves of garlic, kosher salt and 1 1/2 cups of the soaking liquid to a blender and purée until smooth. Strain the chili mixture through a fine-mesh sieve into a bowl, pushing the sauce through with a spoon and discard the solids. You should have about 2 cups.

Season the pork all over with the cumin and 1/2 teaspoon kosher salt and brown on all sides in a large stock pot (or pressure cooker, like the Instant Pot IP-DUO60 7-in-1 Multi-Functional Pressure Cooker, 6Qt/1000W with oil. Do not overcrowd the pan and steam the meat, do this in several batches. You want this browned and crispy on the edges!

Add the onion, chopped garlic, diced celery, tomatoes, jalapeños and serrano peppers along with the browned pork back to the pan and cook another 5 minutes.

Stir in water, the chicken broth, Mexican oregano, bay leaves, salt and 2 cups of the chile purée. If using a Dutch oven or large stockpot on the stovetop bring to a boil, then reduce the heat to maintain a simmer. Partially cover and cook, stirring the pork a few times, until tender, about 2 hours. If using a pressure cooker, bring to a low boil, and close pressure cooker lid. Bring to a slow and steady steam and cook on medium for 25 minutes.

Release pressure cooker steam per manufacturer’s instructions. Stir in the hominy and white beans and continue to simmer, uncovered, until the pork starts falling apart for 5 minutes OR about 1 hour more if using a Dutch oven or large stockpot on the stovetop. Remove the bay leaves and discard.

Serve with diced avocados and chopped cilantro on top. With a squeeze some fresh lime juice over the top, I was in heaven! This is just so good! 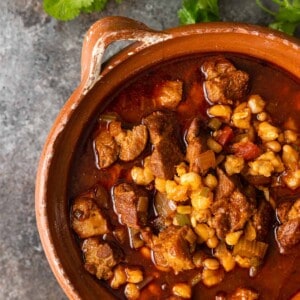 Goodness! Must begin by saying I love the pictures(!) but especially the whole peppers in the blender and the browned pork…Dying! So glad you chose to share this recipe, again! Looks amazing, my friend!

Thanks so much Annie. My previous shots from a year ago were not up to snuff and since I just made a new batch thought I’d share it again. I LOVE browned pork, I just wanted to nibble it on it’s own! Have a great day 🙂

I don’t know why, but I crave spicy food when it’s hot out. And now that I think of it, I’m more likely to crave ice cream in the winter than the summer. #weirdo Anyway, it’s hot hot hot here and this looks fabulous!

I’m with you Marissa! #weirdosunite It’s been super hot and humid here lately and this hit the spot. Twice. 🙂

Hey Kevin! I love posole! And I am so envious of all the fresh produce you have at various farm markets! We do not have a single farm market within 30 miles, which is one reason for our large garden! I get most of my spices and peppers from Penzey’s, but my local store does have a very small Mexican section that has some dried chiles and spices.

Wow Dorothy, that would kill me not having the variety. It opens my eyes how good I have it living here, although you get to have a great big garden. My two dogs dug up and ate everything I planted, even my jalapeno plants!

Hey Kevin! Our dogs aren’t diggers and they respect the garden rows, but my female likes to “pick” her own green bean snacks! She just casually goes down the row munching beans! Luckily she isn’t piggish about it and leaves most of them for us. 🙂

I love guajillo and ancho chiles but I’ve never had chiles de arbol before. I need to find them asap.
I aslo love posole, but I’ve never made it at home Thanks for the inspiration my friend!
#WolfpackSoup

Definitely a lot easier than one might think, give it a try. And like I told Dave, if you can’t find the chiles in your favorite market, Amazon and Penzey’s delivers!

Can I just say how jealous I am that you have an awesome Mexican market near you? We have Italian markets in our area (awesome!)…but Mexican markets full of those amazing peppers and chilies just don’t exist. I guess I’ll have to rely on you sending me a box each week. Haha! 🙂

OK Dave, I do realize I take a lot for granted here in California, but is there no Mexican markets out there? If not, there has got to be a Mexican food section in your supermarket, no? Lord, I don’t think I could live back East without it, although there is always Amazon deliveries!

I wish I had a big ol’ bowl of this right now. AMAZING!!! So happy to have found your site. Another male food blogger, woohoo! I too am a Bay Area transplant here in SoCal. Looking forward to seeing more of your recipes!

Thanks so much Matt, hopefully I can reach out and pick your brain sometime. In the middle of a 10 week T25 Workout, but those Chocolate & Peanut Butter Cookie Dough Cups are right up my alley after!

This looks like a really hearty, comforting and delicious soup! I’m loving your photos atm. Photos for the recipes over the last week or so that I’ve viewed have been stunning. The images are really sharp, great composition and the colours are bright and beautiful. Amazing work Kevin! We’re thinking about buying a pressure cooker and this posole rojo pork could be the last reason I need to do so. Great recipe! Looks really tasty! 🙂

Thanks so much for the beautiful compliments, I’ve been really trying to take better photographs and with natural light. Sometimes it doesn’t always work out in my favor, practice makes perfect! Pressure cookers are wonderful time savers and I use them often, it is a great addition to the kitchen! Let me know how your Posole Rojo Pork turns out. All the best!