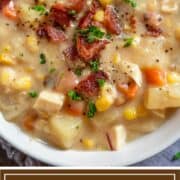 My crock pot corn chowder is a thick soup with tender potatoes, bacon and spicy heat. Make this easy corn chowder recipe for a hearty meal!

I love to make crockpot meals, and if you work from home like I do, then you have the benefit of smelling your meal as it cooks. If you have to leave the house, then rest assured; when you get back home, dinner will be ready and waiting.

Loaded with sweet corn, chunks of tender potatoes, carrots onions, and crumbled, smoky bacon, this Southwest inspired corn chowder is amazing! There’s a slight kick from a chipotle pepper in adobo sauce, and although it’s super creamy, there is no cream in this chowder soup!

That’s right, no cream or butter are used, but the flavors and textures still scream pure comfort food.

Prep the veggies and into the slow cooker they go. Push one little button and you’re set! This robust and hearty corn chowder soup is loaded with creamy goodness and flavors of the Southwest!

The fall and winter months are the very best time of year to enjoy corn chowder. Unfortunately, fresh sweet corn is only in season during the summer. It’s okay, though; my easy corn chowder recipe calls for either frozen or canned corn.

In addition to the niblets, you’ll also need a can of creamed corn. This is my secret ingredient for making a thick and creamy corn chowder without heavy cream. The benefits here are that creamed corn is less expensive and lower in calories.

This chowder recipe is made in the crock pot, so rather than making a traditional roux to thicken the soup, I use a slurry of cornstarch and evaporated milk.

I use evaporated milk because it contains 60% less water then regular milk. If you make slow cooker soups often, you probably know that they don’t reduce down and thicken. This is because the steam can’t escape during cooking. The slurry thickens the crock pot corn chowder soup perfectly.

Diced potatoes are what make a chowder a chowder, and onions are a standard ingredient. Yellow, white, or even red onion can be used. As for the potatoes, I prefer to use Yukon Gold or thin skinned reds. You can use Russet potatoes, and they do a good job of helping to thicken the chowder. However, they tend to break down and become mealy if the soup cooks too long.

I like to add diced carrots for a pop of color, but you can leave them out and the soup will be delicious.

The only other veggie I use in this recipe is a chipotle pepper in adobo sauce. I like to make my own chipotle peppers, and it’s easier than you might think! If you don’t want that extra work, just buy a can of them.

💡 No waste PRO TIP
You can freeze chipotles in adobo!

To freeze the chiles, chop them (or leave them whole), and freeze them surrounded in adobo sauce in an ice cube tray. When you want to add a spicy kick to a bowl of Instant pot chili or some scrambled eggs, pop out a cube and toss it into whatever you’re making.

I add bacon to my crock pot corn chowder because I love the smoky flavor it adds. If you’d like to make a vegetarian corn chowder, you’re welcome to omit the meat.

However, if you’re a meat lover and you want add more meat, feel free to add any cooked protein of your choice. The most popular is chicken corn chowder, but feel free to use your imagination! I think it would be fantastic with leftover holiday ham or turkey breast.

For visual step by step instructions, be sure to watch the video located in the recipe card at the bottom of this post!

Note:
If you’re planning to freeze the corn chowder soup, I recommend using red potatoes. The second choice is Yukon Gold, and Russets only if there are no other options.

I find that Russets tend to get mealy in texture after being frozen, though not every time. My thinking is it the amount of starch in them, not positive. Just something to think about.

Those pops of sweet corn, the slight kick from the chipotle, tender carrots and potatoes and the smoky bacon all come together. Looks pretty good for no cream or butter, huh? Tastes even better, and this recipe makes a large batch, so I usually freeze half for a later use.

Serve it with a crusty loaf of bread or some Mexican cornbread and you’ll be set for a delicious comfort food meal! 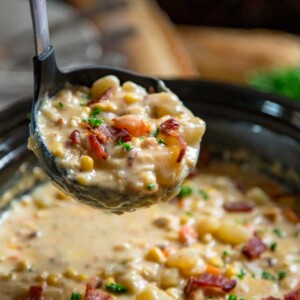 The recipe says serves 10, and the photos showing (soup bowls) are for certain not small 1/8 cup serving size. Something isn’t jiving.

However, the recipe itself reads and looks AWSOME. I am merely hoping for clarification for the Nutritional Analysis.

No its not. Although I’m not sure where the 1 oz serving was on the recipe card as I do not see it myself Sharon. Strange, but this is for 10 servings total. Hope you give this a try and let me know! 🙂

Thanks for sharing this delicious recipe with us. I really like your recipe and I try this recipe today.

Thanks Emily, hope you enjoy this one!

Thanks for the tips. Appreciate it!

Thanks for following along here Alana.

Thanks for sharing this one with us.

I love how absolutely loaded this chowder is, Kevin. My kind of comfort food! Putting this on our menu stat!

We loved this recipe! I followed it exactly per Kevin’s recipe and I wouldn’t change a thing. Only thing I had to change was to cook the bacon in a skillet ( don’t have a microwave) and didn’t have enough time to do it in the slow cooker. Cooked it on the stove top boiled for 30 minutes then returned to a very low simmer for 1.5 hours. Ingredients and amounts are all spot on.

I am so glad you enjoyed it! Great thinking on the bacon!

This was excellent! Added one whole jalapeño pepper with seeds ( we love spicy ) and some hot sausage that I cooked and drained of fat instead of the chicken. It was to die for! Will definitely make this again! Oh, and I also used fresh corn and corn water for about half of the chicken broth. End of the season sweet corn is so good!

Yahoo! Always love to read comments like this one Laurie. Thanks!

Cumin is key to the profile of SW Corn Chowder. 2tsp toasted then slightly crushed in mortar. Celery seed in a smaller amount is also a great addition. Plus sweet bell peppers or a variant.

Thanks for the tips Matt. Appreciate it!

You’re welcome 😁
Paprika also gives a very cool look to the chowder. Often I use that in a homemade marinade for chicken breasts, BBQ, then slice and serve on top of the bowl. Allows for perfectly cooked meat independent of the chowder’s cooking time.

Another great tasting dish! Decided to kick it up another notch with extra chipotle peppers. The true test was both my wife and a friend loved it! Thanks Kevin

Excellent David, love when you report back and I am loving the extra kick! 🙂

Soup when it is cold outside just hits the spot for me and this soup rocked my world. The corn and the bacon make is sweet and savory! It is a very hearty and filling soup and is a meal in itself. Serve with a salad and some bread and dinner is done!!

Really happy you guys enjoyed this one Mary. Thanks so much for coming back to comment. 🙂

Kevin, Made this a couple of days ago and it was a big hit! Used red potatoes because I knew I’d need to freeze the leftovers (really appreciate the tip!). I always purée canned chipotles and the adobo sauce then freeze in 1 tbsp portions. I used one tbsp to make the soup and it was definitely not too hot, seems to have mellowed during the cook as you said. So, next time I’ll probably up it to 2 because we’re fans of the smoky heat they bring to complement the other flavors in your soup. Thanks for another great… Read more »

Thank YOU Dave! Love the chipotle puree tip, I gotta try that one. Have a great day. Cheers! 🙂

I remember this one, Kevin! I mean, this chowder is too delicious to forget, right!? It’s still really cold here (we got snow the other day), so I’m still in full blown cozy soup mode, and this southwest flavor packed deliciousness is SCREAMING my name! Pinning (again!)! Cheers!

Cozy soup mode for the win! Thanks Chey. 🙂