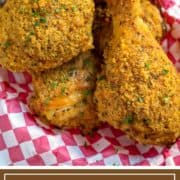 My Oven Fried Chicken is a spin on the classic KFC version, although this is BAKED not fried. To get it super crispy I have a secret I’ll share with you, but read on!

The main thing I look for in fried chicken is a fantastic crunch and flavor. The inside needs to be juicy, not dried out. What more could you ask for in “fried chicken” that’s baked without all the grease and clean up! 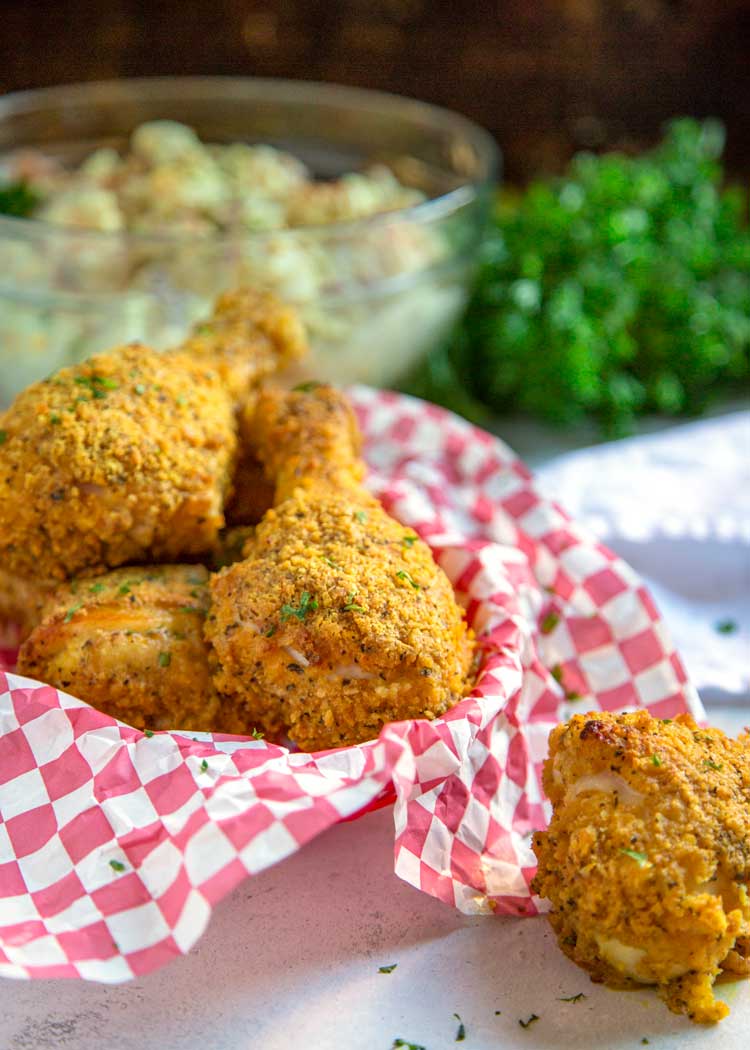 Baking instead of frying was the goal and when you bake the chicken the skin renders the fat and gets crispy. The tough part was getting the right consistency in coating the chicken and I believe I have it covered.

First you’ll need to start off by soaking the chicken in buttermilk. This not only tenderizes the chicken, but allows the spice and coating mix to adhere better to the chicken pieces.

While I did a tremendous amount of reading and testing I can’t believe some of the nonsense I saw passing as KFC copy fried chicken out there!

Some even said they got the recipe online from the Colonel’s family, and I’ve seen that “handwritten” recipe from the supposed grandson, but some people didn’t even follow that! He had the ingredients written with “tsp” as in teaspoon and people had tablespoon in their ingredient lists, with the same amounts of flour he had. OVER KILL. 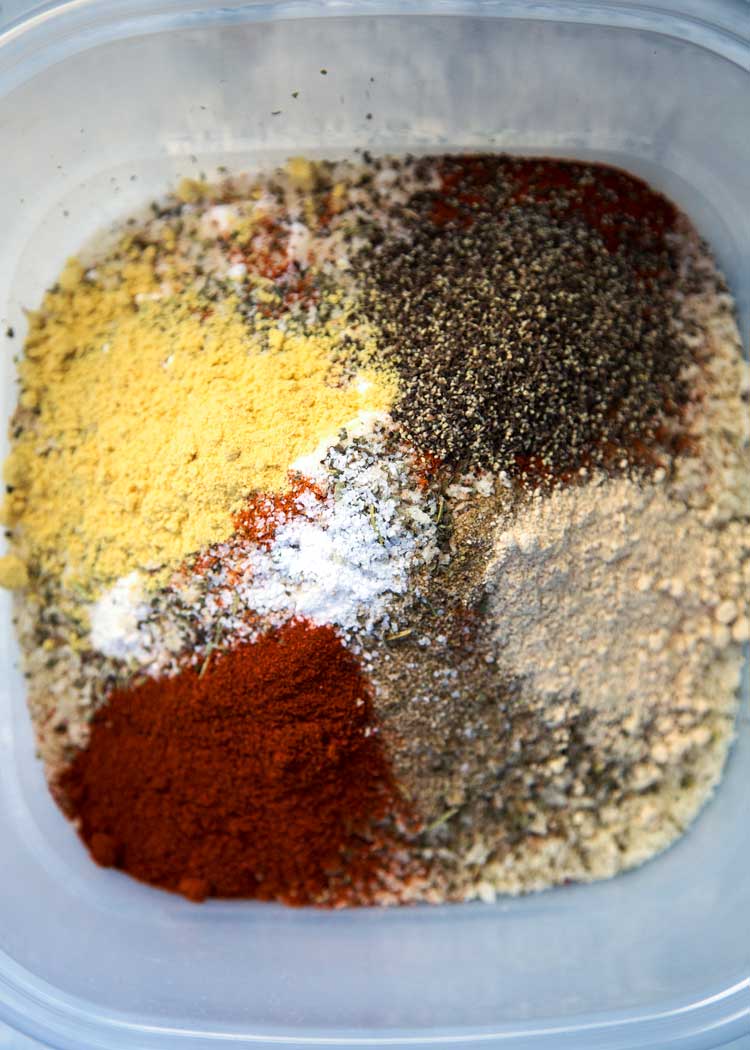 I made several batches with several different versions and techniques.

The image below shows the seasoning and breading I came up with although the photo shows the batch that I double dipped. As in buttermilk marinated chicken, then shake it off, dredge in the seasoned flour and then back in the buttermilk with an added beaten egg and dredged again. Double dipped and ready to bake. Melted butter gets drizzled over each chicken piece and in the oven they went.

What I found out was this double dredge technique is great if your actually frying the chicken (yes, I tested it that way, too!). It was good, though the breading was too much and got slightly steamed on the inside while baking. It was crunchy on the outside, but half of it slide off when taking a bite. Not that crunch-tastic fried chicken feel I was looking for.

While it did indeed taste great, I adjusted the paprika and black pepper and used white pepper for the next batch and liked that better as well only doing one dredge. To get the extra crunch my secret is to add some baking powder to the dredge. 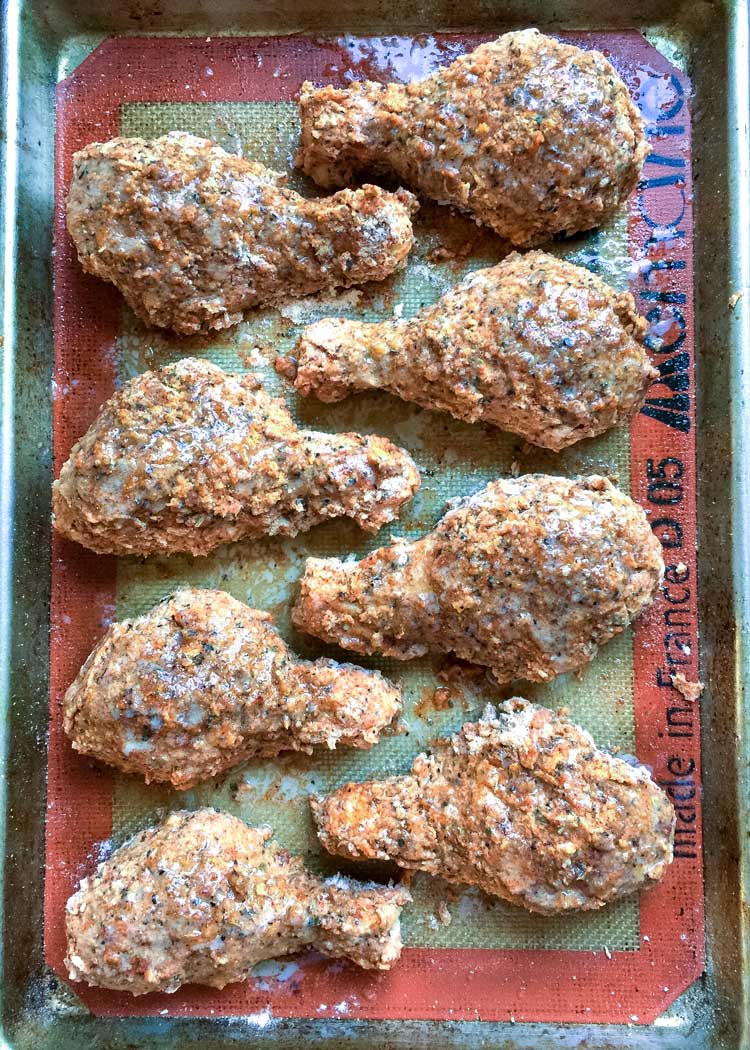 Here is the batch of the double dipped and dredged version. Looks and tastes amazing, but was not perfect. 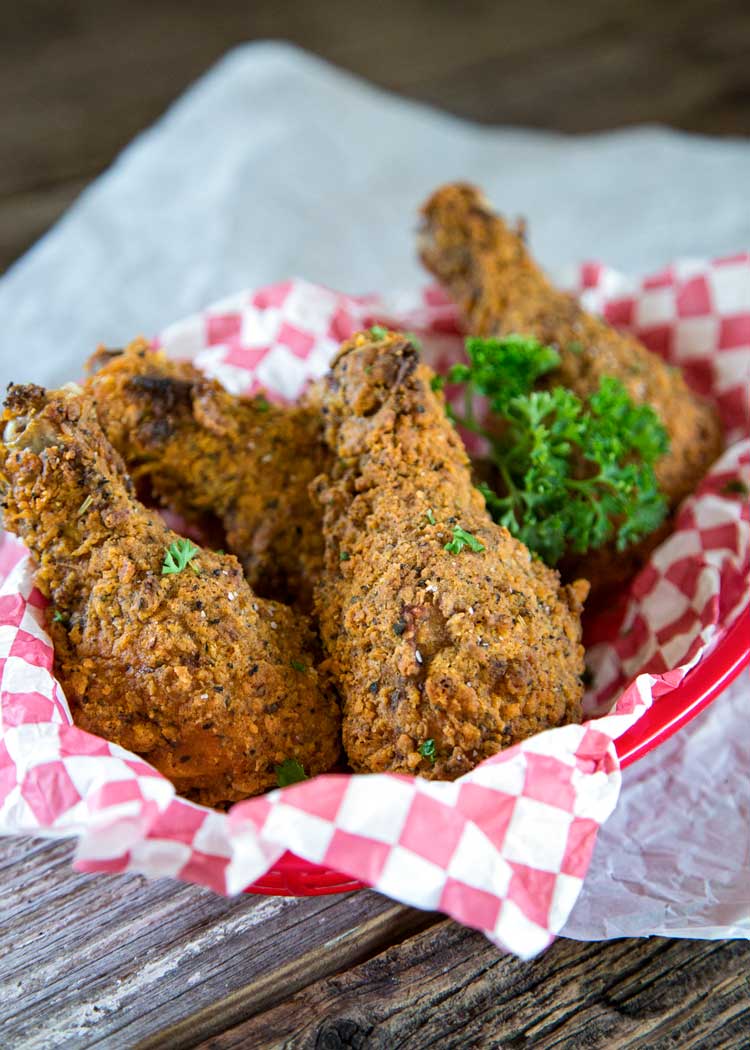 I wanted a baked version that tasted like it was fried. Back to the drawing board and the store for more chicken (thank goodness it was on sale).

For the oven fried chicken batch I have written in this recipe I added turmeric for added color, lessened the paprika and black pepper and used white pepper, did only one dredge in the seasoned flour with a little Panko for added crunch after soaking in buttermilk and the crunch was spot on! Don’t forget to add that baking powder to your batch, that’s my secret for mega crunch. 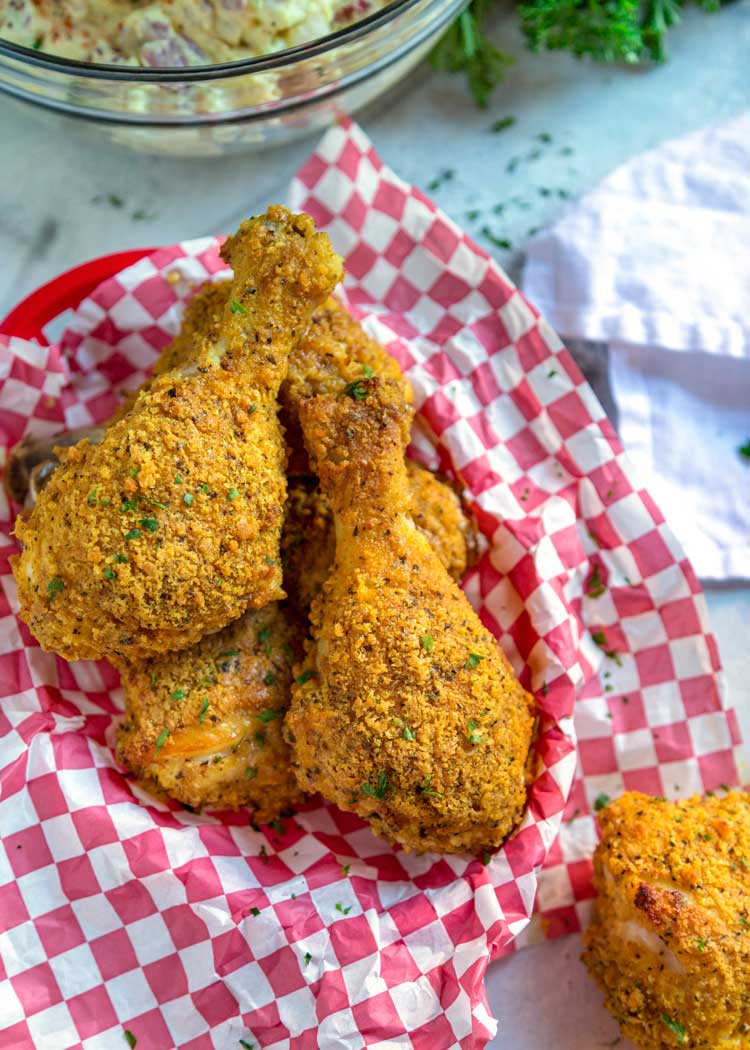 I like a bit of heat and kick so a little cayenne was added in the seasoning, too. That is totally optional, but I highly recommend it. This is THE version. What started out as a test to get the KFC version ended up being better than I had hoped. This oven fried chicken is the way to go for me and I hope you enjoy it. Lightly coated, crunchy, flavorful and juicy on the inside. You could tap a fork on it and hear how crunchy it is going to be!

Fried chicken feel and taste, though baked in the oven with just a  little butter.

If you like baked chicken dishes try my Apricot Baked Chicken, Cherry Roasted Honey Chicken or my Bacon Wrapped Chicken. Here’s the recipe for my Classic Potato Salad recipe seen in the photos, too. Enjoy! 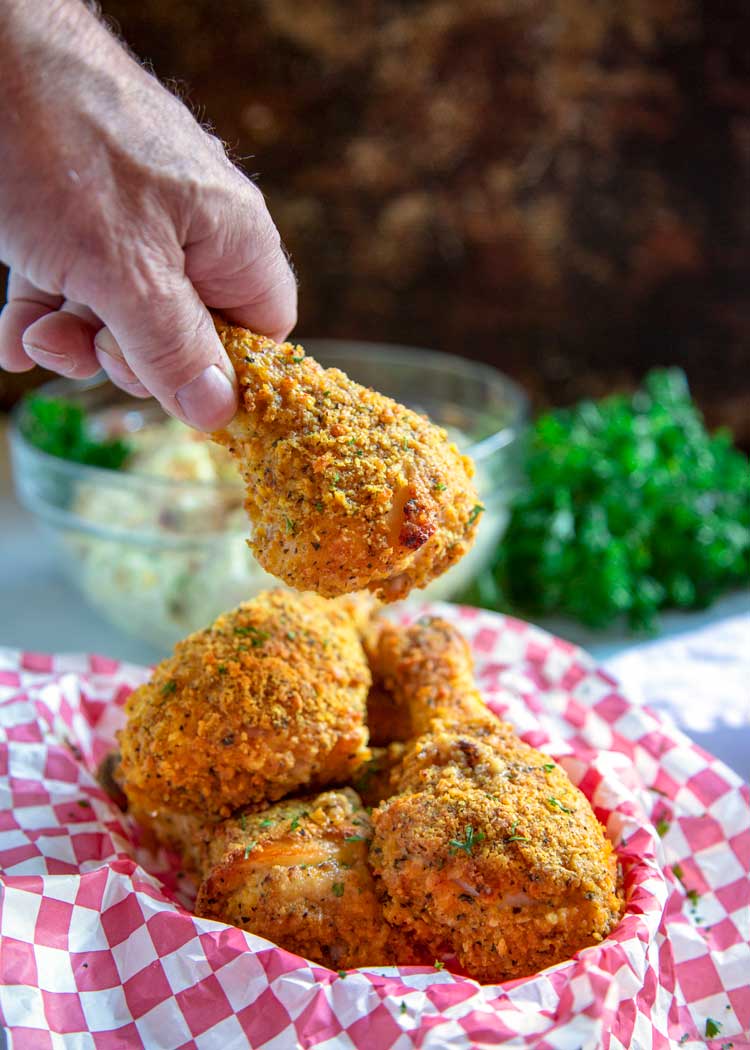 This recipe first appeared on Kevin Is Cooking in March 2017 and has been updated with new photos and a video. 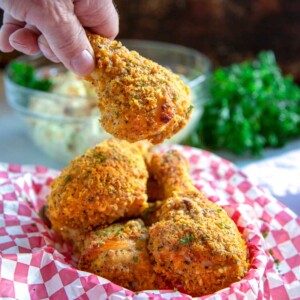 My Oven Fried Chicken is a KFC Copycat, is BAKED not fried, and has a fantastic flavor and crunch. What more could you ask for in “fried chicken” without all the grease! Recipe video included.
4.94 from 120 votes
Print Pin Rate
Course: Dinner, Main
Cuisine: American, Western
Prep Time: 20 minutes
Cook Time: 24 minutes
Total Time: 44 minutes
Servings: 6
Calories: 868kcal
Author: Kevin Is Cooking

***Nutrition info should be lower than noted as this currently represents using all ingredients, BUT not all fat from chicken and butter is eaten as it renders and butter "frys" chicken and remains on bottom of baking pan.

I made this recipe and followed the instructions to the letter, but it was not crispy at all. Most disappointing. What did I do wrong?
Ps. Taste was lovely.

This is key: Add the melted butter to the heated baking dish and arrange the chicken pieces on top with plenty of room on each side so they “fry” not “steam”. I can’t think of any other reason that they did not turn out if followed to the letter.

Thank you for your reply. Is it possible that the oven was not hot enough or I used too much butter? ( so the chicken boiled instead of baking?)

This was excellent! Cook time was perfect. I scaled it down for two 4 1/2 oz drumsticks. I used a foil lined metal pan in the toaster oven. My 84 yr old, chicken drumstick-loving mom loved it! Your experimenting with the spices was very successful. Thank you for sharing your recipe!

Thanks so much for making my day with this comment Pam. Cheers!

I am wanting to serve this to a very large crowd. If I cooked the chicken the day before and then reheated it in the oven, would it still taste as crispy?

I doubt anything could be crispier than fresh, but yes, you could and it should be good.

This has been my go-to recipe for years and it’s perfect. Just wondering if you’ve ever tried it in an air fryer and if you altered it in any way for that (other than, obviously, time/temp). Thanks in advance!

Haven’t played with an air fryer, but I’m sure it would work just fine. Thanks Toni!

Can you use a baking sheet instead of a baking dish?

You mention about avoiding glass bakeware, so do you use a ceramic or metal pan?

Yes I have several ceramic ones (Pampered Chef) and metal roasting pans. Hope you enjoy this one Julia!

Hi Kevin Just wanted to know if I could use regular flour instead of Panko bread crumbs thanks so much for the recipe? Linda

Yes, but the added crunch factor would definitely be missing. Can I ask why?

Really helpful video and the chicken is great! I do think it would be easier if the proportions were representative of a smaller amount of chicken though. For example, for 8 pieces of chicken drumsticks only.

So glad you enjoyed this one Kyle. As for “pieces” vs weight, it’s hard to judge when some “drumsticks” are bigger or smaller, all relative. BUT you can alter the ingredient list if you hover your mouse over the NUMBER of Servings and move it up or down, ingredient list changes as well. Hope this helps.

Kevin Is Cooking
Reply to  joe A Kuronya Sr

Thanks for the seasoning list – but it’s WAY low on salt compared to KFC, though probably for the better. The baking powder and panko bread crumbs are great ideas and I can’t wait to try it. I will say that you may be correct about 1 tsp amounts, but NOT for salt. I cooked KFC chicken using the original techniques back in the late 60’s working my way through college. We had a 20 lb sack of flour and a THREE POUND sack of salt, along with a plastic bag of about two pounds of “The Colonel’s secret ingredients”… Read more »

Thanks for the detailed tips and info here Mickey!

Thanks so much for posting this recipe! We are vegetarians but I love the taste of KFC which I remember from my childhood. I made this with mushrooms and halloumi but followed all the other steps and it turned out great. I think the flavours are wonderful and I even made a gravy from the drippings in the bottom of the pan to go with mashed potatoes. With a coleslaw on the side, it was a good as eating out!!

I am so glad Darcy! We love it around here too! Thanks for sharing this!

I made this for my husband, who absolutely loves KFC. He could not believe how wonderful it came out! You definitely knocked it out of the park when you came up with this! I really appreciate all of the effort you put into this recipe, and I look forward to trying out some of your others. Thank you so much!!!

I am so glad Dawn! Nothing beats having a meal you love at home! I hope you find more recipes you enjoy! Thank you!