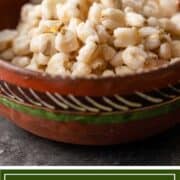 Hominy – what is it? Where does it come from? What does it taste like? How do you cook it? And what to serve with it? Today I’m giving you the answers to these questions and more!

Hominy pops up often in Mexican, Tex-Mex, and Southwestern-American dishes. The first time I came across it in a recipe, I’ll admit I wasn’t sure exactly what it was. It looks like large kernels of corn, which makes sense as it technically is a type of corn. The kernels undergo a special chemical process (it’s not as scary as it sounds, trust me) that makes them easier to cook with and digest.

It’s also considered a grain. It’s an essential ingredient in traditional homemade grits and is also used in corn tortillas. Sometimes it makes an appearance in soups too. Some chefs go so far as to call it a better version of corn and, well, I have a tendency to agree with them!

If you’re not sure how to use hominy in your recipes or are just curious to know more about this type of grain, I’ve got you covered with some of the tastiest recipes ever.

Hominy — sometimes called hominy corn — is made from maize, otherwise known as field corn. It’s either white or golden yellow in color. You often see it in cornmeal, tortillas, corn flakes, and some other grain-based products. Unlike sweet corn, you don’t eat hominy on a cob. If you’ve eaten traditional grits, you’ve eaten hominy!

Uncooked hominy is larger than your standard corn kernels. They are typically about the size of a penny. They boast a “puffed up” texture and won’t get stuck in your teeth like corn on the cob has a tendency to do.

It’s is naturally gluten-free, which is a win for any of you with gluten sensitivity. The chemical process used to make hominy (which I explain in depth below) makes this food more nutritious than corn. It features much more vitamin B3, otherwise known as niacin than standard corn.

This Mexican grain has been made for thousands of years. Let’s take a closer look at how it’s made and how it differs from corn.

Difference Between Corn and Hominy

I already told you that hominy is a type of corn that has gone through a special chemical process. What else is different between these two types of (admittedly similar) foods?

Hominy goes through the chemical process in order to change the structure of the grain. It’s called nixtamalization, which is a really fancy world for a not-so-fancy process. The word is derived from Nahuatl, a language spoken by the ancient people of Mesoamerica. They invented nixtamalization, which involves soaking corn in an alkaline solution. The solution features calcium hydroxide that’s usually made from lime, lye, or wood ash. Again, sounds scary, but it’s a pretty straightforward process.

Nixtamalization removes the hard husk from the corn. It also changes the protein and carbohydrate structure of the grain, making it easier to digest and cook with. It changes the flavor, and in my opinion, takes it up a notch. The nixtamalization removes the tasteless outer layer of the corn. All you’re left with is the tender and tasty inner kernel! The kernels can then be ground into a fine powder. Ground hominy sticks together when placed in water, which means it’s ideal for making homemade corn tortillas.

Most people no longer soak corn at home to turn it into hominy, and I don’t recommend you try it yourself. You can find it at many supermarkets across the US these days. It usually comes in a can or in ground varieties that you can use in tortillas, chips, and grits.

Ways To Use Hominy

You can use hominy in a number of ways. It has an earthy and more complex flavor than sweet corn. Again, you can purchase it already cooked in a can, dried hominy kernels, and ground hominy.

You cook dried hominy kernels in the same way that you cook dried beans and lentils. You’ll be required to rinse and soak them overnight before cooking in boiling water. You can feel free to eat your cooked hominy with butter, salt, and pepper as you would other types of corn! It’s also often seen in soups, stews, casseroles, drinks, and tortillas.

If you’re here for some incredible recipes, you’ve come to the right place. I wanted to share a few of my own recipes as well as some that I found online. You’ll have to let me know in the comments if you try any of them!

How is Hominy Made?

You’ll remember that hominy is made by soaking corn in an alkaline solution, like lye, lime, or ash. It’s a process that has been around for (literally) thousands of years and was created by the ancient people who lived where Mexico is found today. The process is called nixtamalization. The word is derived from the equally as ancient language Nahuatl.

If the thought of lime or lye touching your food doesn’t sit well with you, don’t worry. It is scrubbed after it has gone through nixtamalization, and you’re left with a tender and earthy taste.

Is Hominy the Same as Chickpeas?

Hominy is sometimes compared to chickpeas. While they are prepared similarly when dried and taste alike, the similarities stop there.

Hominy is made from field corn (maize) that has been soaked in a solution made of lime, lye, or ash. Once it has soaked, the husk is removed and then the grain is either dried, cooked, or dried and then ground. It is native to Mexico.

Chickpeas are a grain legumes and more closely resemble beans. They are chock full of protein and are often seen in vegetarian and vegan cooking. Sometimes referred to as garbanzo beans, chickpeas are native to the Mediterranean. They are sold cooked or dried and can even be turned into gluten-free flour.

What Can I Substitute for Hominy?

If you’re having a hard time tracking down hominy at your local supermarket, I definitely recommend that you check online. If you still can’t find what you’re looking for, here are some good substitutions:

This may or may not bee Mexican but my Dad turned me on to it years ago and is easy breakfast . Cook a 1/2 lb. of good sausage crumble for small pieces , add 1 can yellow or white (i like the yellow ) Hominy let warm to temp. med. add 6 eggs for scrambling to all cook till done stirring when needed to get it all done to desire , Enjoy

Now this sounds quite tasty Eric, thanks! I love it in soups (pozoles) and pan fried with a little butter and maple syrup for breakfast, too! 🙂