Kevin Is Cooking » Recipes » Cuisines » Mexican » What is Mexican Oregano 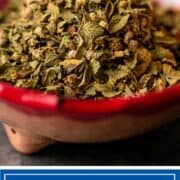 Mexican oregano adds a pop of interesting flavor to a variety of Mexican dishes and sauces. Do you know how it differs from other oregano varieties? Below, I address everything you’ve ever wondered about this dried herb!

If you’re no stranger to Mexican cuisine, you’ve likely already encountered Mexican oregano. And, if you’re anything like me, you have probably wondered how it differs from good old-fashioned Mediterranean oregano. I’m here to tell you that the differences between the two are subtle but important.

To put it simply, the taste and smell of Mexican oregano just pairs better with the other ingredients found in Mexican recipes. It’s a small add-on that will make a huge difference in your cooking!

What Is Mexican Oregano?

Mexican oregano is native to, you guessed it, Mexico. The flowering plant that produces the herb can also be found in Central America and in the southwestern corner of the US. The plant doesn’t need a lot of water, which is why it thrives in these hot climates.

It features citrus undertones, which makes sense as it comes from the same family as lemon verbena. It’s earthy and has an almost grassy flavor. In the same way that Mediterranean oregano is a pantry staple in the US, the Mexican variety is most often seen in popular, classic Mexican recipes.

In appearance, the two herbs look almost identical. Dried Mexican oregano is a bit leafier and it’s also a lighter green. Again — when comparing taste, the differences are subtle, but they’re there. Pasta, pizza, and grilled meat recipes that call for the Mediterranean variety have completely different flavor profiles than Mexican dishes like enchiladas or albondigas soups. It makes sense, then, that the two spices feature different tastes!

Difference Between Regular and Mexican Oregano

Mexican is considered stronger in terms of taste, smell, and flavor. Both types of oregano are earthy and herbal, but Mexican varieties pair best with other Mexican ingredients. You will see this type of oregano in chilis, salsas, and other spicy dishes like my Mexican Pickled Carrots, a site favorite. It is “that” ingredient that makes the dish that sets it apart. The earthy undertones also compliment the heat of chile peppers really nicely.

If you’re wondering if you can sub in one for the other in terms of the Mexican oregano vs oregano question, the answer is: sometimes. More often than not, you should replace it with dried marjoram or dried verbena. The flavors of these herbs are much more similar. If you do opt to substitute it with the Mediterranean, you should use a bit less.

WAYS TO USE MEXICAN OREGANO

You can use this seasoning in a variety of recipes. Its earthy and citrusy flavor enhances spicy recipes in particular! You can even use it as an herb in tea.

I’ve already provided you with a few recipes above. If you’re itching for even more ideas, I wanted to share some of my personal favorites out of my own recipe box, as well as a few ideas from some other food bloggers I love:

Where to Buy Mexican Oregano?

You can easily find Mediterranean oregano in your local supermarket, but what about Mexican? If your market doesn’t carry it in the Mexican food section, the next place to look is at a Latin American or Mexican specialty store. You can also order this dried herb online. Simply search for it and you’ll find that many sites (even Amazon!) carry it.

Is Cilantro the Same as Mexican Oregano?

Cilantro is also native to Central America and the southwest corner of the US. It’s another popular herb seen in Mexican cooking. While it doesn’t have the same exact flavor profile as its oregano counterpart, the taste is almost comparable. You can sub in one for the other, but make sure to add your cilantro to your dishes at the very last minute. If heated too long it loses its flavor.

Can I Use Fresh Mexican Oregano?

I’ve focused on dried oregano throughout this article as fresh varieties are much stronger and can quickly overpower the other flavors in whatever dish you add it to. That said, if you’re working with a recipe that calls for a strong oregano taste, go for fresh! I will say that it’s even more difficult to find than dried.

I used to find the fresh oregano easily living in San Diego, California, but now that I live up in the Portland, Oregon area, I have yet to see it fresh anywhere. If you use it often, you may consider investing in a plant to grow at home.

It’s a wonderful flavor and so different than Mediterranean, right?! Thanks Maria!

Find Mexican Oregano from Rancho Gordo in Napa! Order online along with your orders for heirloom dry beans and other treats!!

Thanks for the tips Peter!