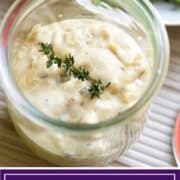 There are so many easy shortcuts to use when cooking, but I really try not to use canned, processed ingredients whenever I can help it. They are extremely high in sodium, and the flavor is really bland.

I’ll show you how easy it is to make condensed soup from scratch. It is SO much better than using Campbell’s cream of mushroom soup, and it only takes 10 minutes to make this recipe!

There are so many holiday recipes that call for a can of condensed soup. I mean, who doesn’t serve up the infamous French’s green bean casserole, right? That’s a mainstay tradition!

Trust me, you will feel great knowing that you can control the ingredients and the amounts used. Oh, and no more tiny pieces of rubbery mushrooms. This recipe uses fresh crimini mushrooms!

Here’s a little eye opening information on what’s hiding inside the can, and answers to commonly asked questions.

According to the ingredient and nutrition label, a 10.5 ounce can of traditional Campbell’s condensed mushroom soup has the following ingredients:

Interestingly, the label mentions sodium being less than 2 percent of the overall ingredients, yet the nutrition label says that 1/2 cup (just under one half of a can) of Campbell’s condensed mushroom soup has 880 mg of sodium! That’s more than one-third of the daily recommended intake of sodium!

See? Homemade condensed cream of mushroom soup is so much healthier than Campbell’s!

Is condensed mushroom soup the same as cream of mushroom?

Can you eat condensed soup out of the can?

Condensed soup is meant to be prepared with a liquid to make soup. While you could eat it straight, the taste would be extremely rich, and the consistency would be too thick to be enjoyable. 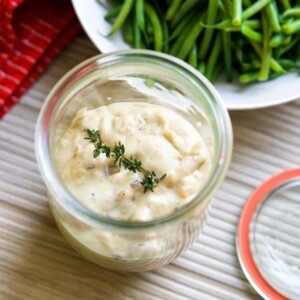 I just made this soup using frozen mushrooms. I chopped the mushrooms fine and sautéed them until liquid was gone. I then proceeded with the recipe. Excellent! No more canned cream of mushroom soup in our house

By far the best cream of mushroom soup substitute I have made.

Excellent! Love to read comments like this. Thanks for making my day Suzanne!

I live overseas and can’t find cream of mushroom soup. I stumbled on this recipe and it is phenomenal. I’ve used it for the last couple of years. I can’t go back to the canned stuff. This recipe is amazing, easy to make and I often double or triple it. Thank you for sharing.

Kevin Is Cooking
Reply to  Jess

Thanks for the comment, Jess. I’m so glad you’ve found it helpful, and trust me when I say that you’re much better off making condensed soup from scratch. The ingredients in the canned soups are questionable at best. 😉

Jess
Reply to  Kevin Is Cooking

Since I just got 15lbs of mushrooms and I’m going to dry only half of them, I wondered if there is a way to make this recipe and store it for later use, but in the pantry instead of the fridge.

I would not recommend keeping this unrefrigerated, unless you can it following proper canning guidelines.

Have you ever tried freezing this recipe?? How long does it keep in the fridge? Thanks for the post! Excited to try!

I have not as it only makes 1 1/2 cups, although I have used it in recipes with other ingredients and frozen them for later use with no issues. I wouldn’t keep it more than 5 days in the the fridge myself though. Thanks Emily!

This is good stuff. Made some this afternoon and followed your recipe to the T. I plan on using it in a potato and ground beef casserole. This is going to enrich the flavor. Love the garlic and onion taste . Thanks for a great recipe. I plan on using it in the place of canned cream of mushroom soup in recipes or any type of creamy soup or chowder I might make. So glad to find your recipe..

What I enjoy so much about this is how easy it is to make as opposed to reaching for a can with all sorts of chemical sin it that you don’t need. Making a big batch and having it in the fridge is great. So glad you like it Kathy! I hope you take a look around the site, lots of other good recipes await!

Quick question. I see so many recipes that call for CCMS and I love the idea of your homemade version. I’m horriblly allergic to mushrooms which makes eating out at many places a chore and I always have to look for substitutes. I’m a huge sautéed onion fan. Do you think onions would work? Is there anything else you’d recommend substituting when a recipe calls for mushrooms or CCMS? It’s such a difficult allergy since mushrooms add such great flavor and are hidden in so many things, especially sauces. Thanks for any suggestions you have and absolutely love you recipes!

I do think substituting onions and or celery would be a great substitute for the mushrooms. I do this as well myself. Thanks so much Joy and have a wonderful Thanksgiving. 🙂

Thanks for taking the time to reply. I appreciate your feedback and love your recipes!

Joy you might want to add a little Worcestershire for the umami flavor since you have no mushrooms.

That’s really cool, Kevin. I would never have thought to make my own, or that it’d be so straightforward. Have to confess that I’m ambivalent when it comes to green bean casserole – one of my many deficiencies … but I do make plenty of other dishes that call for CCMS. Btw, your stroganoff looks delish!

Thanks Jeff. I like to have some on hand for what ever creation strikes me!

This is so fantastic! I never would have thought of making condensed soup myself (and I don’t like to buy canned stuff either, so I generally don’t use it at all). What a great idea! And nice photos as well! 🙂

You made my day Nicole, thanks so much for the kind words. With your videos and Nagi’s book I’ve been practicing and practicing! 🙂

Hey Kevin! Thank you! I never buy canned soups because of the overload of salt, we are just not heavy salt users. I of course cook with it, but never salt my finished food.

Agreed Dorothy! Plus, fresh and homemade is what it’s all about, right? How is your back doing these days?

What an awesome post, Kevin! I totally have that natural wonder when I see something in the store of “Hmmm…can I make that my self at home?” I’ve never tackled cream of mushroom soup…but this looks incredible. Well done! #WolfpackFromScratch

Thanks Dave, I make a jar of this quite often for when I get that last minute thought and it comes in handy. 🙂