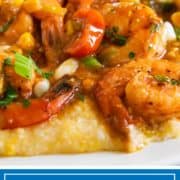 New Orleans shrimp and grits is a Creole dish with a rich, flavorful sauce. Make this recipe tonight for a taste of classic Louisiana cooking!

Are you curious about the difference between Cajun and Creole? Some quick research on my part revealed interesting facts:

Cajun is a word used to describe the French colonists who moved from the Acadia region of Canada down to Louisiana after the British conquest of Acadia in the 1700s. (Present-day New Brunswick, Prince Edward Island and Nova Scotia)

Creole is a term used to describe the people who were born in New Orleans with French and Spanish ancestry to those who descended from an African, Caribbean, French, or Spanish heritage.

As for the cuisine term for these, Jay D. Ducote wrote in the Louisiana Travel:

A vastly simplified way to describe the two cuisines is to deem Creole cuisine as “city food” while Cajun cuisine is often referred to as “country food.”

While many of the ingredients in Cajun and Creole dishes are similar, the real difference between the two styles is the people behind these famous cuisines.

New Orleans shrimp and grits features a light sauce made with flavorful seasonings, with tomatoes and corn poured over cheesy grits.

The sauce is well seasoned but not spicy. While it does have a little kick of heat, it’s the flavors that all come together to make the dish memorable.

If you’re a regular reader here you know I use homemade spice blends, and for this one it’s no different. To reduce the sodium found in many store bought spice blends, you can make your own Creole seasoning spice blend.

For the Creole Shrimp

Grits are a staple in southern cooking, similar in texture to Cream of Wheat, but made from corn. The neutral flavor makes it extremely versatile – it can be used in both savory and sweet dishes.

Adding shredded cheddar cheese to make cheesy grits is a popular way to enjoy them. They’re my favorite part of this Creole shrimp and grits recipe.

Scroll down to the recipe card and you can watch as I show you how to make this fantastic Creole dish!

Removing the shells from shrimp allows the meat to soak up more flavors. Plus, it’s easier to eat them without the shell.

Bags of pre-shredded cheese include a preservative to prevent the shreds from clumping together. Unfortunately, it also prevents the cheese from melting properly. 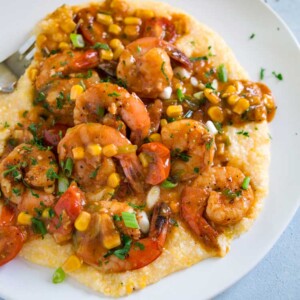 Made this as a tester for company. Tried it out on my daughters and their friends who are very picky. Everyone said this was very good!

So glad everyone enjoyed this one Christina! Thanks for coming back to let me know.

Absolutely delicious! The creamed corn just added POW! to the grits! Thank you for such a Devine recipe! Hubs loves!

I just love this one myself, thanks for trying and for taking the time to come back and let me know Sandra. 🙂

Wonderful! I just tore up my old Dupree recipe.. this is easier/ tastier. Second time I added some chopped green pepper and a bit of andouille for the meat eaters.
My favorite by far!

Fantastic, this makes me so happy. Thanks for letting me know Susan!

Another winner, Kevin! Followed recipe exactly and it was great. Thanks!

One of my favorites, thanks so much Dave!

I love to make and I will, looks so delious

Thank you! I hope you enjoy this recipe as much as we do!

Hi Kevin, I found your site while looking for a shrimp and grits recipe we had while visiting Louisiana. This one sounds amazing and I will have to try it. I was hoping you would be familiar with another variation, shrimp and grits with andouille cream sauce (from Chimes restaurant). I am also hoping to find a recipe to replicate the New Orleans BBQ shrimp with fried grit cake. I can probably “wing it” with both of these recipes but hoped I could get some assistance with each. (I can’t take much “heat” and Chimes prepared these recipes perfectly for… Read more »

Kevin I made this dish and me and my family enjoyed it tremendously!

Kevin Is Cooking
Reply to  trishp

I am so glad that your family enjoyed it!

Kevin, I have made this dish SEVERAL times and it is fantastic!! The shrimp and corn are outstanding! I made it again two days ago and cooked the grits in a 9 x 13 dish in the oven instead of the stovetop- it was wonderful because no stirring or worrying about sticking. Same quantities of broth/grits-just combine those plus 1 tsp salt in a 9 x 13 and bake at 350 for 30, 35 minutes until liquid is absorbed. Remove from oven- add cheese and creamed corn and bake again for about 10 minutes. (I added a can of Rotel… Read more »

Thank you for sharing this wonderful recipe! My family loved it!

Thank you for telling me your family enjoyed it! I love hearing that!

My son moved to Michigan. Every time he comes home I make him his favorite dish shrimp and grits.
This is my favorite easy recipe. I am making it again. It is sooo… good and easy. Thank you.
I wish I could get a jambalaya recipe this easy.

I am so glad you enjoyed it! Thank you for sharing!

Those succulent shrimp and that rich, spicy sauce have my mouth watering! Love the base of grits to make sure not a drop is missed!

Hi. Your recipe for corn grits and shrimp is excellent – thanks! I just returned from some weeks in southern Louisiana and I’ve had this dish in New Orleans, Broussard, and Lafayette. The problem for us up north is that we can’t get fresh shrimp – it’s all frozen.

You are correct about the Cajuns but you missed the boat about Creoles. Creoles came from Haiti, France and Spain. They are quite different in culture, but the food has sort of blended together. There is some little practice of vodou in Creole culture but not Cajun.

Thanks for the Creole info David!