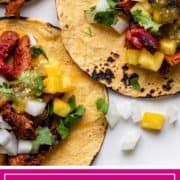 What is Tacos Al Pastor?

Tacos al pastor is a Mexican dish with a Lebanese origin. A play on lamb shawarma, this “shepherd style” meal is seared with flavor and can be prepared (and enjoyed!) in a variety of ways. Al Pastor’s history is most likely a result of the shawarma spit-grilled meat brought by Lebanese immigrants to Mexico. It’s also similar to the Turkish doner kebab and the Greek gyros. Whereas shawarma typically uses lamb (thus the “shepherd style” name), gyros and tacos al pastor in Mexico are made using pork.

My tacos al pastor recipe contains Mexican oregano, epazote, and achiote paste for a truly authentic flavor. These ingredients are optional, but they add a beautiful depth that you won’t want to miss! They can be found in any Mexican supermarket.

You can marinate the meat overnight if you’d like – that’s what I do! But 4 hours is enough time to really tenderize and flavor the pork.

Read on and check out the video in this post to learn how to make this authentic and addictive Mexican dish. Now let’s make some al pastor tacos!

HOW TO MAKE MARINADE FOR TACOS AL PASTOR

2. Prepare the Pork.  Slice into ¼-inch slices for grilling or baking, or 2 to 4-inch chunks if slow or pressure cooking. The chunks can also be baked.

3. Marinate.  Add the pork to a storage bag. Add the marinade and massage into the meat with gloved hands. Seal and refrigerate for 4-10 hours. Bring to room temperature before cooking.

HOW TO MAKE THIS TACOS AL PASTOR RECIPE ON THE GRILL

2. Skewer. Layer cut pineapple bottoms on the skillet. Stick a skewer in the center of each.

3. Layer the Meat. Slide the pork slices down the skewers and repeat until all meat is used, leaving 1 inch of skewer uncovered. Top each skewer with trimmed pineapple.

4. Grill. Grill the meat to a safe internal temperature of 145°F-150°F — this takes my grill 3 ½ hours, but timing varies. In the last hour of grilling, baste with the skillet juices.

5. Slice & Serve. Slice down the layers to serve. Throw the slices back onto the grill as you carve, searing each piece for a perfect crust.

HOW TO MAKE THIS TACOS AL PASTOR RECIPE IN THE OVEN

For either method, preheat the oven to 250°F.

Tip: If the “BURN” notice appears on your Instant Pot, add a bit of chicken stock to the pot.

Pasilla chiles are chilaca peppers that are ripened and dried. They are meaty and almost black in color. Their flavor is rich but sharp, and they can be very hot.

Guajillo chiles are one of the most common chiles grown in Mexico. The Guajillo is a shiny, deep orange-red chile. It has berry tones with a sweet heat and is commonly used in salsa, chile sauces, soups and stews.

De arbol chiles are a bright green chile that ripens to bright red, a color it retains when it’s dried. It’s long and skinny (about 3 inches by 1 inch) with a smooth skin. Be aware, it has an incredibly spicy kick. I also use these in my Chile de Arbol Salsa.

A lot of al pastor tacos recipes out there use adobo chili paste, but I wanted to use my own adobo blend for this one.

The chiles I use here are Pasillas, Guajillo and De Arbol which come from my local Latin market. If these are not available to you, make a batch of my chili powder recipe. It’s a good substitute, preferably with guajillo chili powder. I think adding chipotle chiles is not needed or authentic really, but feel free if you like.

The options for chiles to use is endless. So, play around with them, experiment and enjoy the test tasting.

What is al pastor sauce made of?

The marinade used in my al pastor tacos recipe has a bit of everything: sweet pineapples, sharp onions and garlic, tangy vinegar, and a whole mix of Mexican spices and seasonings for a deep, smoky heat.

How long does it take to make al pastor tacos?

It takes between 4-10 hours to marinate, but the overall cooking time depends on your cooking method of choice!
In an Instant Pot, it takes just under an hour. Cook time varies between 4-8 hours in the slow cooker.

Roasting in the oven takes between 3 ½ and 5 hours. Grilling takes at least 3 ½ hours and depends on the grill model. 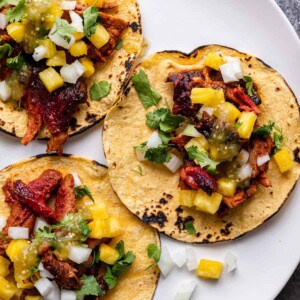 If grilling or roasting in the oven, slice pork shoulder into 1/4 inch slices. For other methods, trim fat from the pork shoulder and cut meat into 3 to 4 inch chunks.

For the Grill or Smoker:

First timer here! I love Al pastor tacos! Could I use leftover bacon trimmings to put in between the meat? I figured it would help keep the meat moist while in my convection oven. A little extra fat never hurt anybody! 😃

Sounds amazing to me, let me know how it turns out Jillian.

hey i was curious on smoking times

Temp and time would be the same if done in a smoker Elii. I’ll update the recipe card to reflect. Enjoy!

Can I make the chili seasoning ahead of time and store it?

I would refrigerate it and use it within a day or two or simply freeze it Dennis.

I love this recipe! It’s absolutely amazing! How do you freeze it? Should you freeze it marinated or just freeze the meat before marinating? I just bought a big piece of meat and it’s just me and the hubs this time

You could marinate and freeze it for later Marialisa. Great to have this one already prepped!

This tasted AMAZING! Probably the best thing I’ve ever made at home… BUT made it last night and I’m having stomach issues this morning and feel worried it may have been undercooked. Is 25 minutes really enough time in the instant pot? I’m reading other recipes thar basically say 15 minutes per pound in the instant pot. I love the recipe, but very curious about how to be sure it’s properly cooked?

Christy, thanks for reaching out, but the cooking times are good. After 25 minutes at High pressure, 15 minutes stand and 10 under the broiler to crisp the edges, the internal temp should easily be 145-150°F, which is safe for pork.

Whew! Good to know because I plan on leftovers! Probably something else was upsetting my stomach! I love this recipe sooo much! It was fun getting the unique chilies and learning! I also made your Salsa Verde! Yum! And I got fresh handmade tortillas from a tortilleria here in Bonita Springs, FL! Amazing stuff! I also want to try this Al Pastor marinade with chicken and shrimp!

Kevin, This is the first time I’ve ever felt compelled to leave a comment on a recipe. I have made this several times over the past couple years- and it’s been such a hit every single time! I now double the recipe, and throw half in the freezer (with the marinade) so I can pull it out, defrost, and cook in the instant pot at another time. It’s a staple in our family! I’ve made it for parties and have had repeat dinner guests request it! I even made a HUGE serving of it on vacation to bring to a… Read more »

Wow! Such kind words, thanks for making my day Lydian! It is a BIG favorite around here and for the site as well. Thanks again and have a fantastic day. 🙂

Can I use Guajilo Chile powder in replacement of thr one listed below?

I’m going to be making this in a few days for cinco de mayo! We too have a Traeger and will be using this method to cook the meat. What temp do you set your Traeger to?

That would be 250°F Beth. Use large chef’s knife to slice meat in downward motion. Put pan back on grill to crisp up the edges as you continue to slice remaining meat.

The recipe looks great, and I am wanting to try it next weekend. I am confused about the chile powder. If I click on the link you included it gives a recipe for it, but that is different from the recipe you included at the bottom of this recipe. Different peppers are used. So which is intended for this recipe? I have dried ancho, pasilla and guajillo peppers, just not sure which I should be using.

You could use either here Karla. One is a Chili Seasoning and the other a Chili Powder (just dried chilis). Since you have the chilis, go for the Homemade Chili Powder version. Hope you enjoy this one!

I live in Florida and can’t find the chiles. I do have the powders. What are the measurements if I am making the chile mixture from powders? I have no idea how big they are…

Hi Jan, I updated the recipe card to reflect an answer to your question and for anyone else who may need the information as well. Hope this helps!

What a great recipe so so good

A classic! I loved the crispy crunchy exterior. Just keep slicing and roasting!

Have you ever tried making this on a horizontal rotisserie? I assume times would be the same?
This looks amazing and I’m excited to give it a try.

Have not tried that myself, but see no reason why it wouldn’t work just the same Kerry. Let me know how it turns out for you!

When you make it in the crock pot, does the meat have a tendency to shred?

If grilling or roasting in the oven, slice pork shoulder into 1/4 inch slices. For the other methods, trim fat from the pork shoulder and cut meat into 2 to 4 inch chunks. They will shred and be super tender, yes.