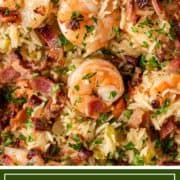 Cajun shrimp and rice is a simple, flavorful dish with the perfect amount of spicy heat. Make this recipe for an easy 30 minute meal! 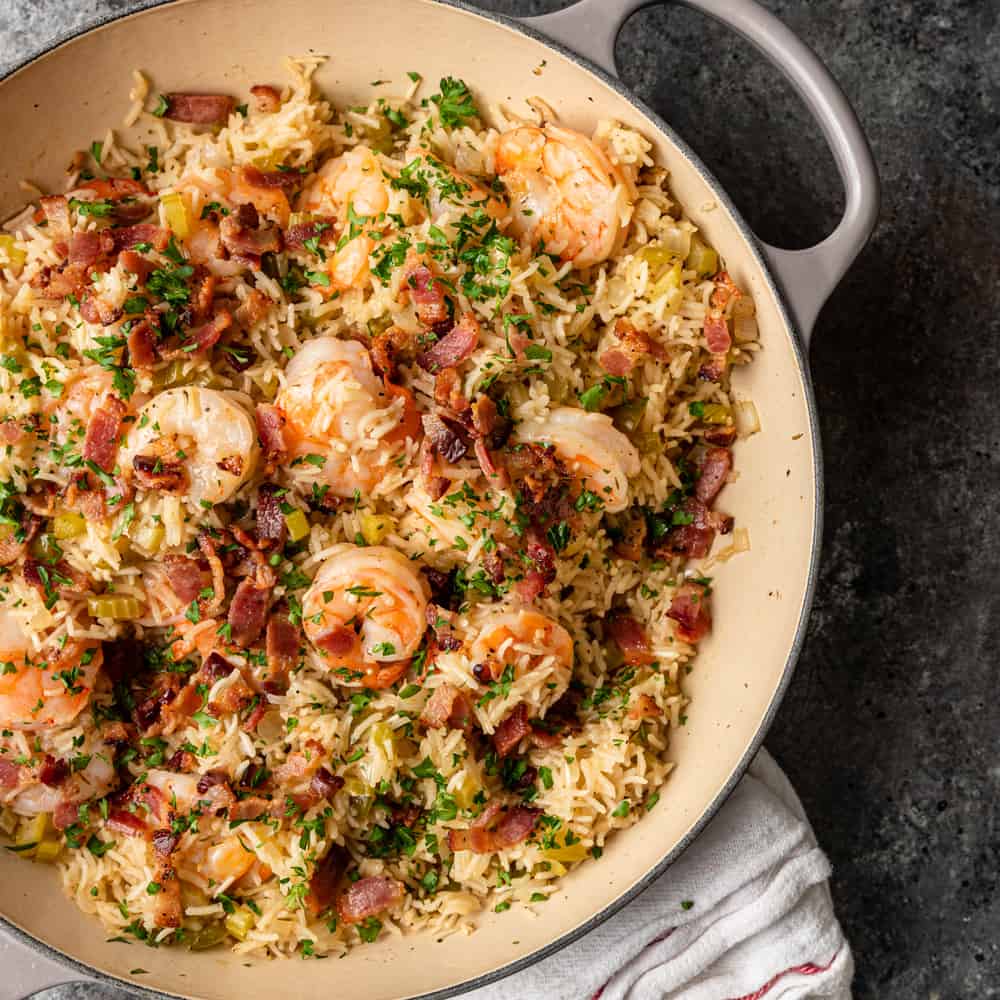 Cajun flavors are a staple in Southern cooking, and they pair perfectly with all kinds of seafood and shellfish.
For this recipe, the rice is simmered in a blend of vegetables and seasonings. Then the shrimp is added right at the end to cook.

This means, every bite of this dish is tender and juicy with a burst of Louisiana flavor. Plus, this skillet meal uses just one pan, so there’s no pile of dishes to clean after dinner! 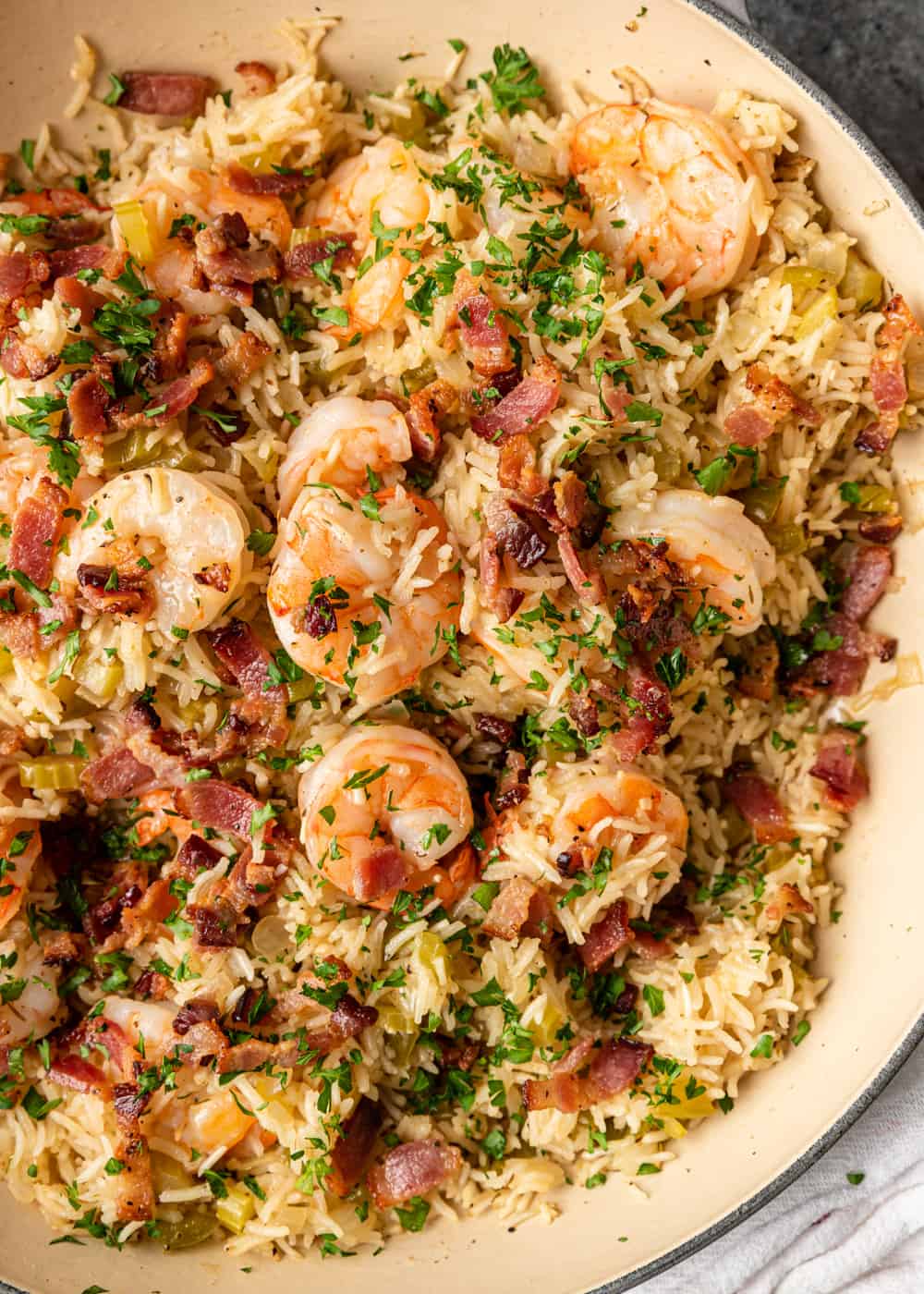 How to make Cajun shrimp and rice

Because everything cooks in the same pan, this skillet shrimp recipe comes together quickly and simmers until done. 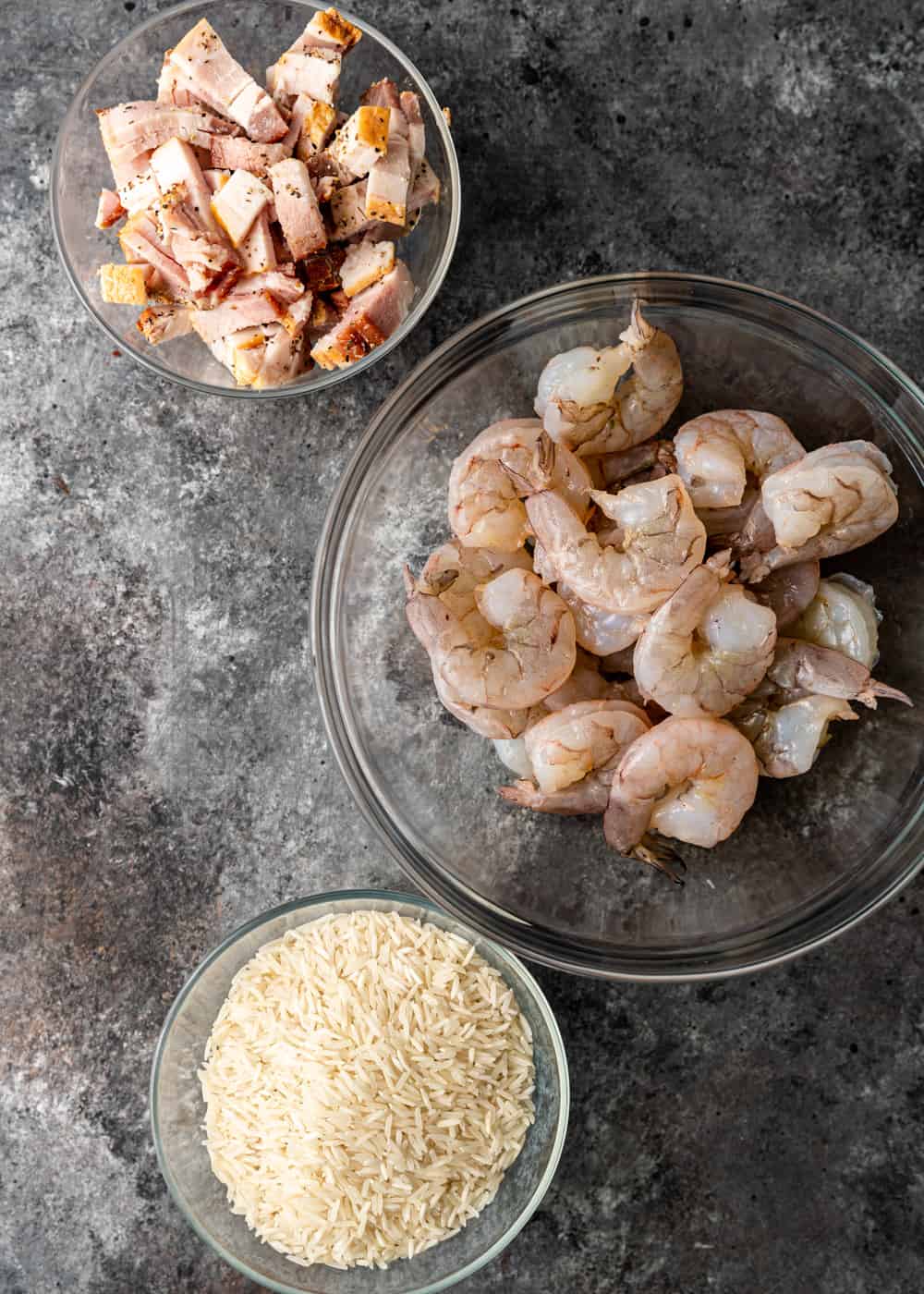 Watch us make the recipe! 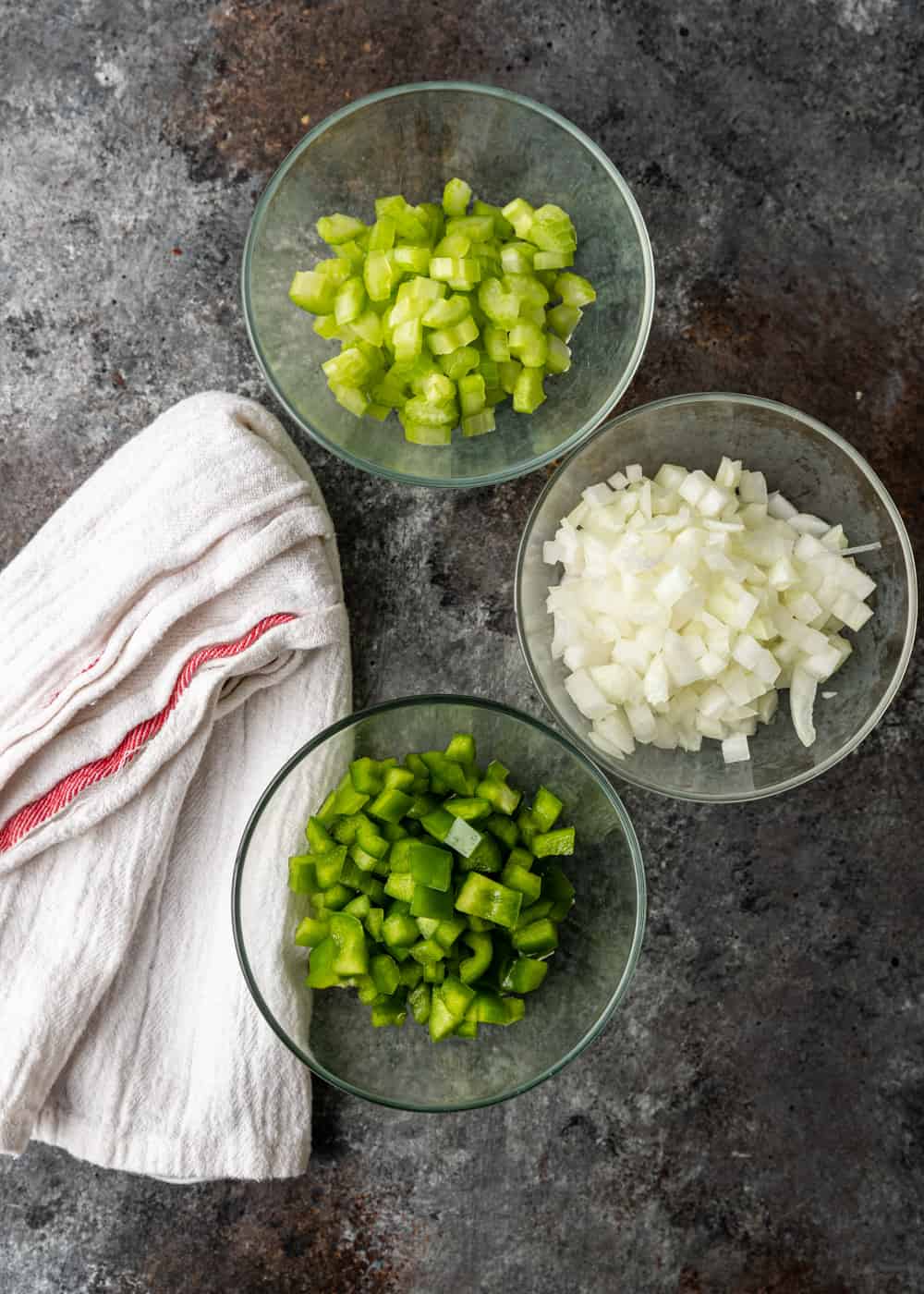 Saute the bacon and veggies 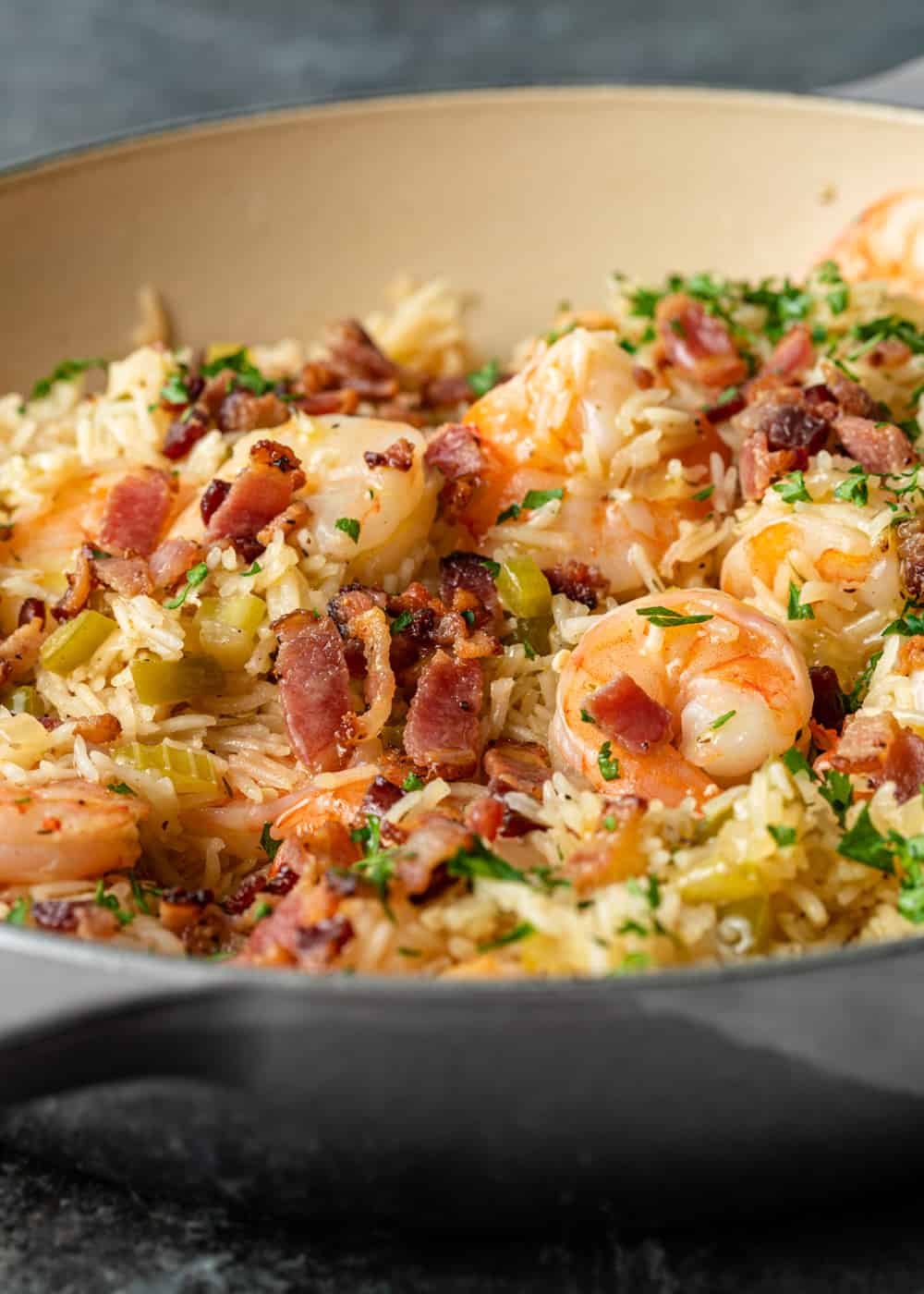 How to peel and devein shrimp

While eating the vein is harmless, it can look especially unpleasant in larger shrimp.
Removing the shell beforehand is simple to do, and it’s easier to eat once the dish is finished. Plus, the shrimp soaks up all of the flavors from the dish while cooking. 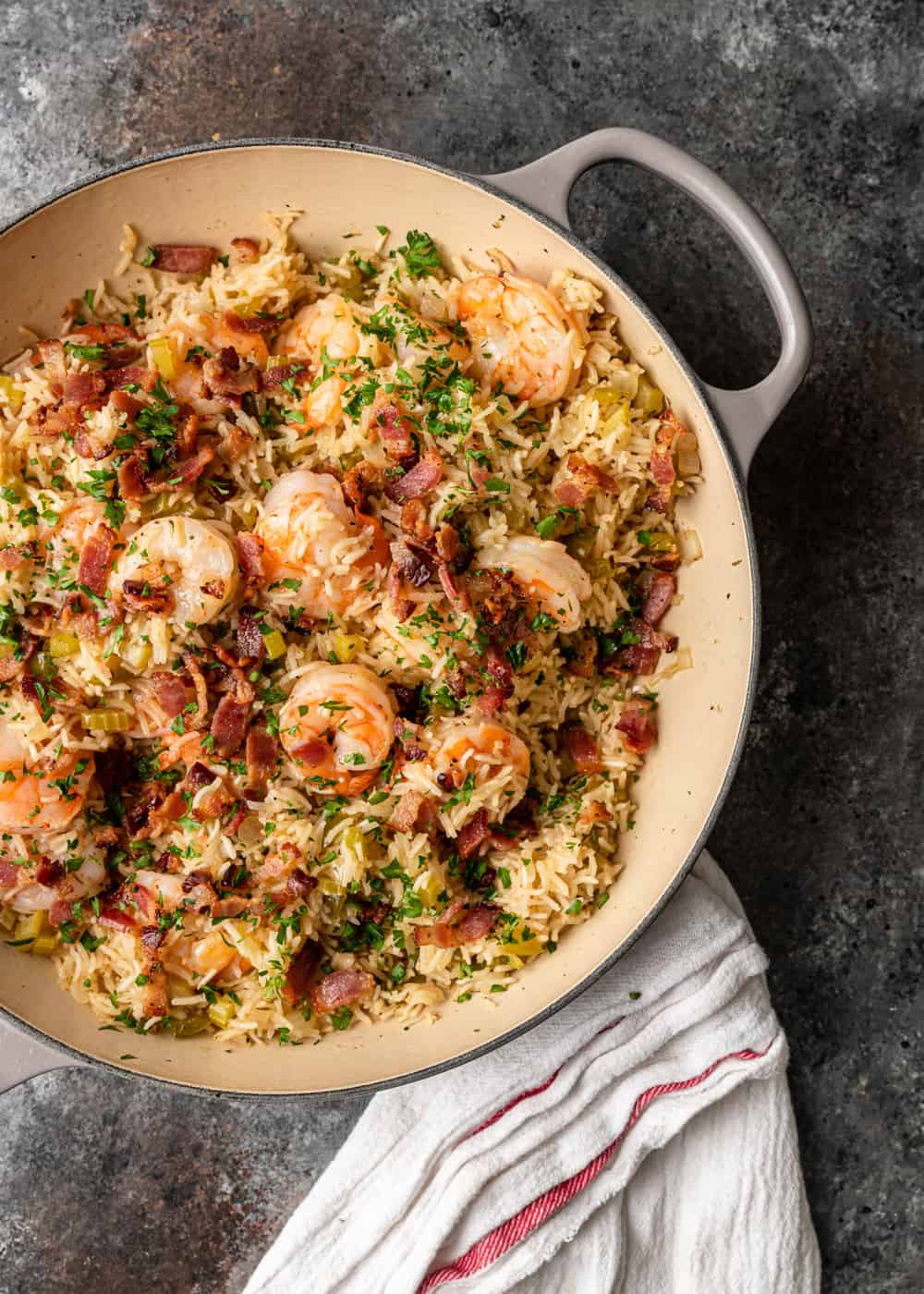 OTHER ONE PAN MEALS TO MAKE

If you like the flavors in the Cajun shrimp and rice, I know you’ll love my recipe for Cajun Shrimp and Grits.

Or, try one of these other one pan meals that are just as easy to make: 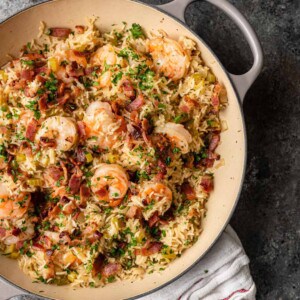 This was great! Bacon for the win. I like that variant better than the andouille sausage you’d find in jambalaya. Will definitely repeat.

Thank you Barbara! I am glad you enjoyed it! I cannot wait to make it again myself!

Your shrimp and rice dish sounds great Kevin. I’m interested to see what the sugar and vinegar addition does as I make something similar. Thank you for the inspiration.

This sounds like some seriously flavor-packed Cajun food, YUM!

This was so tasty! Loved the shrimp and rice with the flavors of the bacon and all of the seasoning! So good!

Amazing dinner! Spice is just where I like it

This looks like an amazing recipe to try. Adding the ingredients to my list so I can try it.

This was a really good recipe. Hats off to you Kevin! I prepared it as is written. It is not “in your face” spicy but has a subtle hint of burn. The only note for the next time, and there will be many next times, is the addition of more salt. Personal preference.

Kevin Is Cooking
Reply to  Barbara

I am so glad you enjoyed it! I hope you like it more each time!

This was such a great change from our normal dinner routine. My kids were so excited at the bacon that they willingly tried the shrimp. It was a total win!

This dish is so spot on!! I am going to try it with lobster and crab next time and keep you posted. Thank you again Kevin for the great eats!!!

Kevin Is Cooking
Reply to  Les

Yes let me know! Thank you!