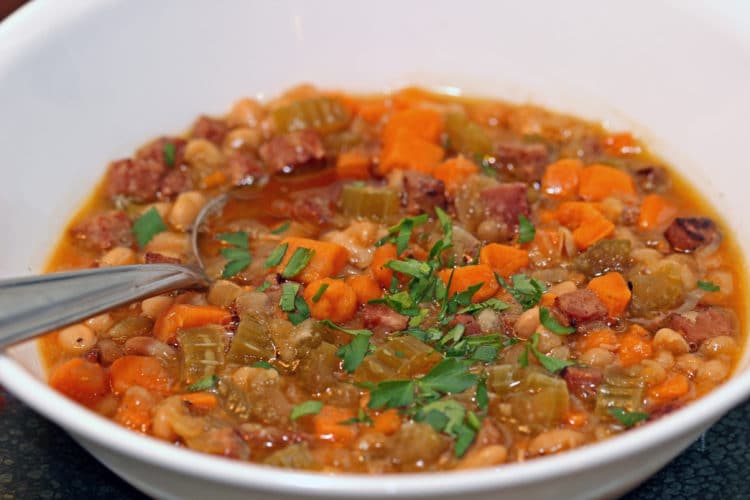 I had a big, fat sweet potato sitting on a shelf in my refrigerator just calling out to be used and treated with dignity. “Make me a star!” it kept shouting to me whenever I opened the door. I thought about it and decided on making a soup from the Black Forest Ham we were gifted with upon leaving a friend’s Super Bowl party the other day. It would be a simple, yet satisfying soup, worthy of the minor cold spell we were having, which would really hit the spot!

First off I remembered I had to get those white beans soaking overnight, or I would have to do a quick soak method I described recently on a post in Tips & Tricks. Simply cover your beans with cold water by 2 inches and allow to soak overnight to rehydrate. Don’t add any salt, only do that during your last 2 hours of cooking.

I wanted the ham to be seared and get the edges all caramelized and crunchy. I simply add the ham that I diced small to a cold cast iron skillet and turned the heat to medium. Once they started to sizzle, I turned it to low and slowly cooked until browned and delectable. 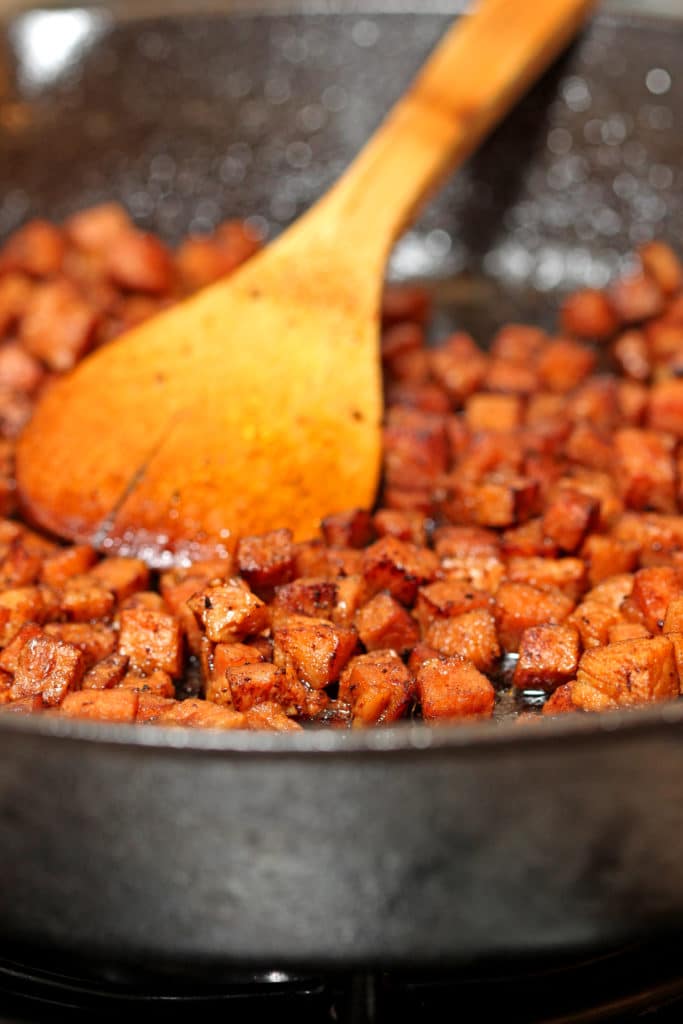 As the ham was browning I cut the sweet potato into small dice as well and set aside. I deglazed the ham skillet with some white wine and scraped up the little browned crunchy pieces. Place the browned ham and deglazed pan juices in a bowl and set aside. 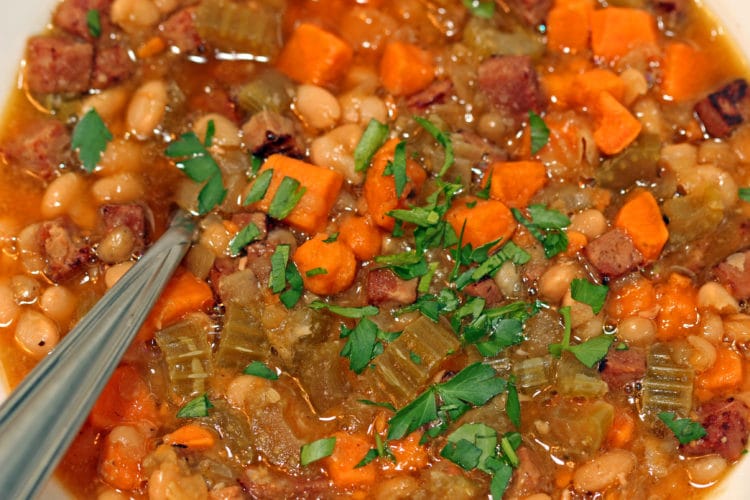 The drained white beans that I had soaked overnight were added pot and covered with fresh chicken stock. I started my new 6-quart Slow Cooker and after 4 hours added the vegetables to the beans. 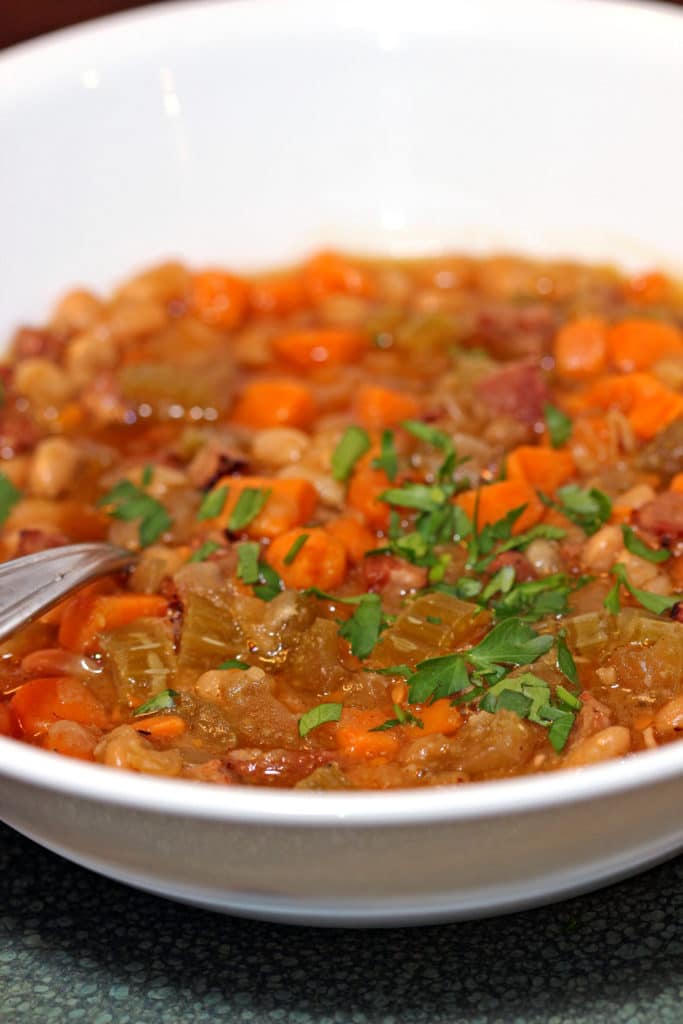 The usual suspects went into the bean soup like onions, garlic, celery . I tried to keep the spices to a minimum and used a couple bay leaves, a fresh bundle of thyme and some red pepper flakes.

With the addition of the browned ham pieces and sweet potato this made for a really hearty and delicious soup. I am not a big fan of the sweet potato, but this won me over big time. The subtle sweet flavor was a great compliment to the Black Forest ham that was browned and brought out it’s condensed flavors. Season with kosher salt to taste and serve with some chopped parsley and crusty bread to sop up the soup. 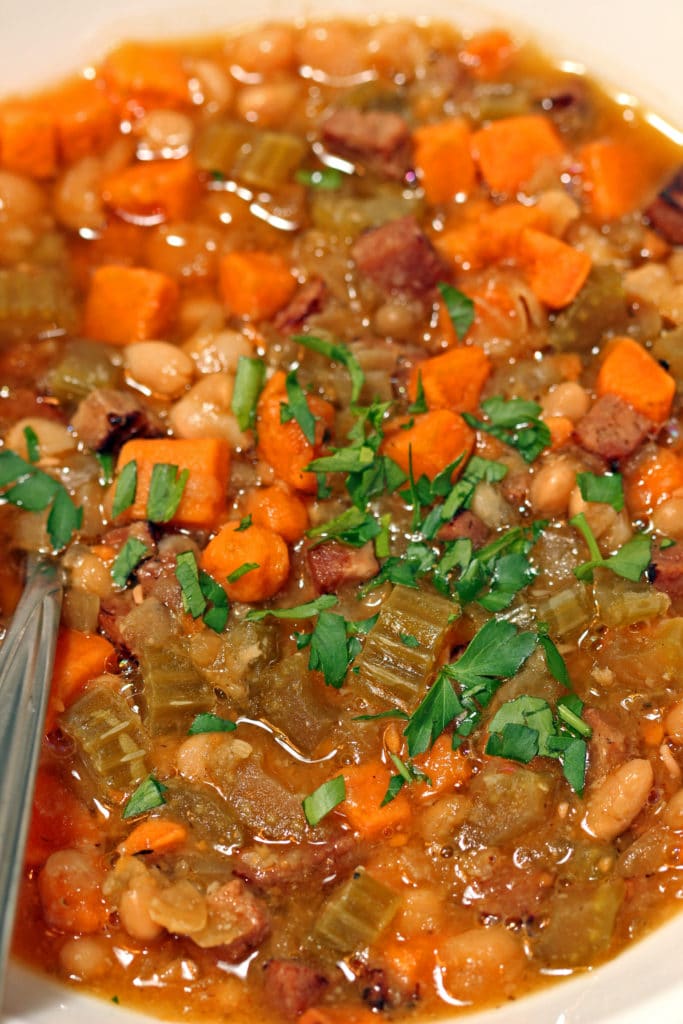 The sweet potato was really good in this soup. A healthy alternative for my go to potato and it lent itself well with the sweet flavor of the ham. By adding the vegetables in the last couple hours of cooking they didn’t get all mushy. I prefer a little firmness still and texture in my soups and this made it on my list to do again. 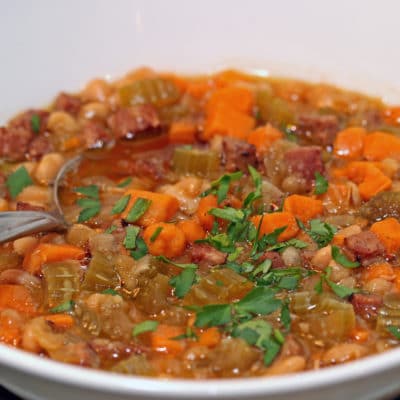 The Ham, Sweet Potato, and White Bean Soup was awesome!!! The only change I made was to caramelize the potatoes with the seasonings in the same pan as the ham when it was done. What a keeper.

Fantastic! Thanks so much Constance!

Thanks for the heads up Steve, got it covered!

This soup looks so good! I have to make it asap!

Thomas Ballard in Greenwoo Nebraska said you have to try it

Not sure what you mean here Ann?

This sounds wonderful. Would it work with canned beans and a stock pot? How long would you simmer?

Definitely Maggie! I’d simmer for 60 minutes tops for vegetables to cook and flavors to meld.