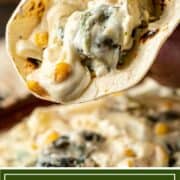 Whether it’s a cozy football Sunday, a relaxing weeknight dinner, or a house party with pals — I’m always on the lookout for comforting, crowd-pleasing dishes aside from the usual wings and dips. Rajas con crema is an indulgent hit and functions great as a dip, side, or even main meal!

Rajas con crema is a beloved Mexican dish featuring zingy poblano peppers and a rich cream sauce. I first had this served to me when in ‎⁨Urique⁩, ⁨Chihuahua⁩, ⁨Mexico⁩ when visiting the Copper Canyon. When I asked the chef, he gladly gave me the recipe and this is my version. It’s super simple to make, incredibly versatile, and all-around delicious.

It’s a great substitute for tapas party classics like Beef Queso Dip or Spinach and Artichoke Dip, or it can even be served as a main entrée with zesty, bold flavors similar to a Beef Enchilada Casserole.

Whether you serve it as a robust party starter or as a sumptuous Mexican-inspired dinner, this recipe will cost very little and take hardly any time to toss together. Watch the video below and see how to make these!

Rajas in English means “slices or strips”, and con crema means “in cream”.  Because the side dish is almost always made with poblano peppers, it also goes by the name rajas poblanas.

After roasting poblano peppers, we cut them into slices and stir them into a creamy white cheese sauce. The sauce is rich and seriously delicious, made with Mexican crema, onions, corn, garlic, and plenty of cheese!

HOW TO MAKE RAJAS CON CREMA

1. Roast your poblanos. Use a gas stovetop, broiler, or grill to roast and char the chiles over a flame. Get them nice and smoky, turning occasionally until they are blistered.

2. Let them steam. Once the poblanos are nicely charred, let them steam either in a bowl covered with a cloth or in a brown paper bag — about 5 to 10 minutes. Then, peel the skin and slice the chiles into 1-inch strips.

3. Get your ingredients simmering. After melting butter in a saucepan over medium heat, add onions and cook them until they’re soft. Add in your poblanos, garlic, corn, and seasonings. Let everything cook together for a few minutes, stirring often to combine nicely.

4. Make it cheesy. Add your shredded cheese, cover your pan, and turn off the heat. Let the dish sit covered until the cheese is perfectly gooey and melted.

5. Serve. Serve this cheesy dish while it’s hot with tortillas or tortilla chips. Or, add cooked, shredded chicken or beef to serve this as a hearty entrée.

There is also the option of roasting poblano peppers on a sheet pan in a 450° oven, but it does take a bit longer. Depending on the size of them and how many you are roasting, it can take as long as 40 minutes.

To shorten the roasting time, you could cut the peppers in half lengthwise and remove the seeds, then roast them cut side down on the pan.

Want other ideas for using poblanos?

Poblano peppers are one of the ingredients in Creamy Chicken Enchiladas Suiza and Green Enchilada Sauce. They are also used in recipes for Mexican Poblano Corn Chowder, and Stuffed Green Peppers.

Can rajas con crema be served as a main dish?

Most often, rajas poblanas iis served as a Mexican side dish, but stir in some cooked shredded chicken or beef and it makes it a delicious main course!

What pepper is less hot than a jalapeno?

There are several peppers with less spicy heat than a jalapeno, including Mirasol, dried Guajillo, poblano, dried ancho, banana, and Anaheim.

How to Eat Rajas con Crema?

Think of this dish as a rich, Mexican version of Italian peppers and onions. You can add cooked meat like shredded chicken or pork to make it a meal of its own, or you can serve it as a perfect taco night side dish. Slather it inside a tortilla with rice or scoop it with tortilla chips.

In this recipe, the strips of poblano peppers are mildly spicy. They aren’t as hot as jalapeños or serrano peppers, but they are a bit spicier than banana peppers or bell peppers.

What is the Difference Between Mexican Crema and Sour Cream?

Though the two taste very similar, Mexican crema is slightly thinner in consistency than sour cream. It also has a higher fat content and a slightly more subtle sour taste, making it the perfect creamy condiment to melt for this peppers con crema recipe.

Why Eat Spicy Foods With Cheese?

While the combo of spice and cheese might be a little rough on some stomachs, it’s a classic and delicious combo. The dairy components of cheese help soothe the palate and break down the compounds in spicy foods, balancing out the heat and making for an enjoyable dish overall.

Storing Leftovers
If you have any leftovers, store them in a covered container in the fridge and use them up within 3 to 4 days. Unfortunately, cream sauces and cheese sauces don’t freeze well.

Reheating
To reheat the rajas con crema, place the contents in a saucepan over medium-low heat. Stir occasionally until it’s warmed through. Avoid using high heat, as the consistency of the sauce will become grainy. For the same reason, avoid reheating the leftovers in a microwave. 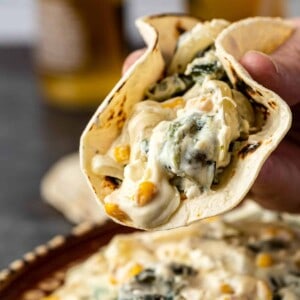 I will let you know if my family loves it or not.But they loved everything else so far!

Please, Thanks so much.

I just made this, added the cooked shredded chicken and it is delicious!!!

One of my favorites, thanks Sharon! 🙂

Can you prepare this ahead and reheat with good results?

Definitely, just add a little water or cream before reheating as the sauce will tighten up Valerie!

This turned out wonderful! Used it top bake chicken breast.

HI Kevin! got this recipe in my email when you sent it after I signed up for your Mexican cooking classes. The first lesson on dried vs fresh chiles and their respective names was great! I spent decades in So California, and I did learn a lot myself about cooking Mexican foods (married a Mexican whose mother was a great cook and learned a thing or two from her). I have followed your food blog for awhile, and made some of your recipes–all great. I thought I might pick up a few more tips from you, and knowledge–right off the… Read more »

Thanks so much for subscribing and sharing this Judy. Glad you’re following along!

This was a hit! My husband and I both enjoyed this very much. Had lots of poblanos in the freezer so glad to have a tasty dish to use them in! By having the poblanos already roasted and in the freezer made this a supper quick and easy recipe.

Wow, I wish I had some of the freezer space to do that, great idea Leiann. Thanks for coming back to let me know!

I suggest a trial run roasting peppers with a propane or MAPP gas torch. I use a MAPP gas torch and have done so now for decades. The MAPP torch burns at around 3500º and is absolutely the best kitchen tool for the job. I use it for skinning tomatoes, plums, and peppers of every sort. Even for steak (fillet) bites. Only way to control doneness with any accuracy. My favorite chili is jalapeño and I can control the effect of applied heat from simple skinning to an al dente roast. Torch them black, quench, scrub(under running warm water), and… Read more »

Thanks for the tips! Will look into the MAPP gas torch!

So so so good

Kevin Is Cooking
Reply to  Dave

Thanks Dave! Glad you enjoyed it!