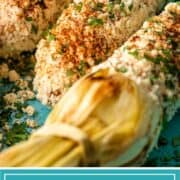 Use this street corn recipe to make the best roasted Mexican corn on the cob you’ve ever eaten! This authentic elote recipe is perfect for summer grilling!

One of the fun adventures of traveling is walking through new-to-you towns to look for authentic foods to try. In most parts of Mexico, you can find street vendors selling food from carts in the center of town.

Mexico has some of the best street food! From empanadas mendocinas, street tacos to walking tacos, and bowls of spicy pork asado to Mexican elote corn.

Elote in English translates to “corn”, which explains how the dish got its name. Authentic elote is as much fun to make as it is to eat, and it’s SO simple to do!

Mexican crema is a thin, creamy sauce, similar to sour cream. I prefer the consistency and flavor of crema rather than thick mayonnaise. You can buy it or make it yourself by stirring some lime juice into sour cream.

Even better though, flavor the crema! Check out my crema recipe post and you’ll find recipes for avocado, chipotle, and a couple of other flavors of Mexican crema you can make!

How to make an authentic elote recipe

What to serve with the street corn recipe

For a complete meal, serve up a few of these Mexican specialties along with the Mexican street corn! 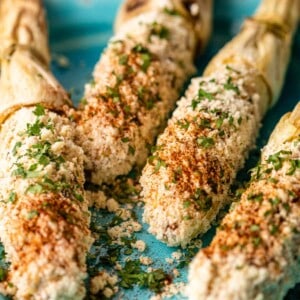 This looks awesome Kev! Corn is an essential vegetable in my house hold when it comes to the summer and BBQ’s 🙂 love this! I make mine in a cub instead of on the cobb because I prefer my guests to leave the messiness to THEIR house 🙂

Thanks Mila! Heck yeah, corn for the win!
Outdoor BBQ party food definitely, unless your sitting down at the table and just dig in, that’s what napkins are for. 🙂

I LOVE Mexican grilled corn…so looking forward to corn showing up at our farmer’s market so I can try this!

That’s where I picked these up at, so many bins full of fresh corn. Love summer! Hello to Ken and I hope you guys are out enjoying this beautiful weekend. Is it as hot up there as it is here and elsewhere? The temperatures are off the charts hot this weekend.

The first time I tried corn done this way was a bit of a life changing moment. Bought from a vendor on the main square in Oaxaca one evening when we were travelling, I literally fell head over heels. And so easy to make!

We just love the stuff although I can’t remember when I first had it. Speaking of Mexico, we have plans for a Mexico holiday that includes San Miguel de Allende, Mexico City, Cuernavaca and Oaxaca. We have been to Puerto Escondido before and were able to stay at a friend’s place and just relax, hike and every morning swim in the ocean. When are you guys headed out on your LONG holiday?

Thanks Mike, appreciate it. The season is here!

Hey Kevin! We’ve been eating corn a few times a week now that we can get good corn! Mexican corn is now on the menu for this weekend! I made a shrimp and corn boil the other night which was pretty tasty! PS Your pork from Monday is also up for this weekend (I just found pork butt on sale)! 🙂

Corn is in da house! 🙂 I had a fantastic crawfish boil when last in your parts of the country, it was so fun AND good. Shrimp sound like a great substitute and are a little more accessible over here.
Sounds like you guys are going to have a tasty weekend! Thanks Dorothy.

Just seen your Mexican Grilled Corn on your twitter account and had to head right over to your blog. They look amazing! My boring version of corn only involves a little bit of butter 😉 I have to try your version next time. So beautiful!

Nothing wrong or boring with a little butter, salt & pepper, right? These just go a step further and I’m sure you’ll enjoy. Thanks Miriam!

I’ve never had Mexican Crema before I would love to try it on this corn!! Sounds absolutely delish, Kevin! And I know I would be generously drizzling some Sriracha on there and tons of cheese. I could easily make a meal out of this corn 🙂 Pinning and I’m sure I’m going to be making this a bunch of times during the Summer months!

I hope to hear back your report, Tasty stuff! In the post and recipe I mentioned how you can make your own crema if you can’t find it up there, too.

Looks amazing Kevin!!! I am an absolute sucker for Mexican corn!