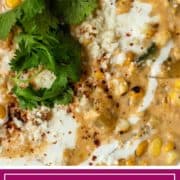 Mexican corn chowder combines charred corn, green chiles and potatoes in a spicy, creamy broth. Make this recipe in just under an hour!

Soups and chowders are usually reserved for cold winter nights, but this spicy green chile corn chowder takes advantage of the fresh sweet corn that’s in season during the summer.

The roasted corn is perfectly balanced with fresh poblano chiles, tender potatoes and Mexican spices. While the soup is hearty enough to be eaten on its own, a simple green salad or loaf of crusty bread or Mexican cornbread is fantastic with it too.

To see the process from start to finish, watch the video located in the recipe card at the bottom of this post!

Char the corn and sweat the aromatic vegetables to release extra flavor, then combine everything into a hearty soup. The secret to thickening this chowder is to puree a portion of the soup before stirring it back into the pot.

For easier shucking, completely remove the stem from the bottom of the corn cob. Leaving the husk on, microwave on high power for 1 minute. This creates enough steam for the cob to slide out of the husk with the silk still attached!

How to Make Poblano Corn Chowder

For more classic flavors and a hands-off approach, make slow cooker corn chowder. If you want a bit of protein with your chowder, I think you’ll love my recipe for Tex Mex chicken corn soup. 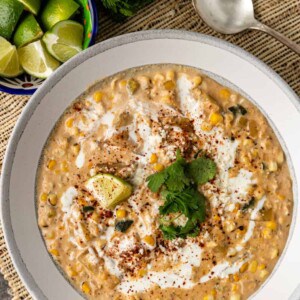 This looks so,good, I would love to make it. We never get poblano’s on this little island, once in 14 years and I grabbed what was there. Green peppers just aren’t the same, and we don’t get cotija cheese either, but I could sub feta. Ilove corn just about anyway you make it.

Hopefully you can make this one happen Cathy, it’s a tasty one!

Since corn on the cob isn’t in season now, about how many ounces of frozen corn would I need?

4 cups of frozen will do it Helen!

This chowder is just bursting with flavor. Loved it. And it was a spectacular side dish with Kevin’s equally delicious pollo asado. Make this while it’s still corn season! Wow.

Excellent! Thanks so much Barry!

This must be the best corn chowder ever. Looks amazing!

Kevin Is Cooking
Reply to  Catalina

We sure love it!

Such an incredible chowder!! I love the flavors!

Thank you so much!

I need to try this asap!! It sounds incredibly delicious!!

You really do need to try it!

These flavors are ON POINT! Loved every single bite of this!

Thank you so much!

I LOVE fresh corn. I never thought to use it in a soup. This is going down tomorrow night!

I hope you enjoy it!

This is incredible. There is no shortage of flavor. It’s everywhere in this dish!

Kevin Is Cooking
Reply to  Kerri

Going to be giving this a try for dinner tonight; can practically taste all that flavor! Looks too good to pass up!

I hope you enjoy it as much as I do!

Wow, charring the corn really adds such a depth of flavor! So delicious!

Kevin Is Cooking
Reply to  Jen