Kevin Is Cooking » Recipes » Kitchen Basics » What are Tomatillos 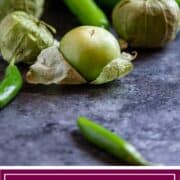 If you enjoy Mexican cuisine, you’ve likely seen tomatillos used in a variety of dishes. If you’ve ever wondered what they are, how to use them, and what they taste like, I’ve got the answers!

Tomatillos pop up all the time in Mexican cooking. The first time I saw one I immediately assumed that it was a mini tomato and would lend the same flavor profile. While I wasn’t completely wrong, there are some notable differences.

These Mexican fruits are often used in salsas, sauces, and dressings. They can also be roasted or eaten raw. I’ve used them in my roasted salsa verde, red chili salsa, and Chilaquiles Verdes. No matter how you enjoy them, there’s much to be learned!

Tomatillo in English translates as “little tomato,” but that translation is a little misleading! This fruit (yup, it’s a fruit!) tends to look like unripe tomatoes with a small husk, which protects the fruit as it grows.

That’s why they’re sometimes referred to as “husk tomatoes,” but they don’t have exactly the same flavor. They belong to the same family as peppers, eggplant, potatoes, and – you guessed it – tomatoes.

Unlike tomatoes, tomatillos are small, firm, and lack a lot of the excess water found in the former. They’re usually bright green, but there are some varieties that turn yellow or purple after some time.

They boast a fresh and tart flavor, somewhat similar to limes. When you roast them, they gain a bit of sweetness and lose a lot of their acidity. Tomatillos are native to Mexico, which is why you often see them in Mexican cooking!

How to Cook Tomatillos

If you don’t plan to use your tomatillos right after buying them, make sure to leave the husk on and store them in the fridge. They’ll usually last for a few weeks. When you’re ready to enjoy, remove the husk and wash well.

This Mexican fruit is most often used in salsas, sauces, and soups. They lend a bit of extra tartness as citrus fruits do. Again, they take on a completely different flavor when roasted or grilled. You will probably come across many recipes that call for you to prepare them this way!

You can use tomatillos in:

…just to name a few! Below are even more tomatillo recipe suggestions.

Now that you have a general idea of what tomatillos are and how to cook them, you probably want to try out a few recipes! You’ll find a few more of my favorites below, plus a few extras that I found online and want to try myself:

How to Grow Tomatillos

While they have become more and more widely available over the years, this fruit can be hard to find at times. I encourage you to check your local supermarket as well as any Mexican or Latin American specialty stores in your area.

If you’re sick of hunting down tomatillos on your own, you may consider growing them at home! You can plant this Mexican fruit just as you would a tomato plant. It’s easiest if you buy a plant that has already started to grow. Then, bury two-thirds of it in the dirt and place the plants about 3 feet apart from one another. Use a trellis to help support the plants as they grow.

You can take care of your tomatillo plants just as you would a tomato – keep the soil moist and make sure that they get 1-1 ½ inches of water weekly. You can also use mulch to help keep the plants fresh and healthy.

What’s the Difference Between a Tomatillo and a Tomato?

I’ve already mentioned several times that tomatillos are not the same as tomatoes, but the question comes up so often that I wanted to address it again! The two fruits are from the same nightshade family, along with eggplant, peppers, and potatoes. Tomatillos also have a similar appearance to unripe tomatoes, but the similarities end there! Tomatillos boast a tart and acidic flavor, while tomatoes are much more watery and sweet.

This is another question that comes up quite often. While I can’t say anything for unripe varieties, ripe tomatillos are not at all toxic! You’ll want to avoid consuming the husk and stems as they aren’t edible. For that reason, be sure to wash the fruit very well before using it. You don’t want any residue from the husk hanging around.

When Are Tomatillos Ripe?

It can be hard to tell whether a tomatillo is ripe or not due to the husk that covers the fruit completely. That said, you can use the husk to determine whether they are ready to eat or not! When the husk changes from green to tan and starts to peel away from the fruit inside – you’re good! A fully ripe tomatillo is a little bit larger than a cherry tomato.