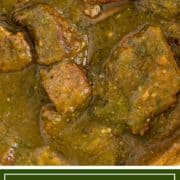 Chile verde is a Mexican pork chili with tender meat in a spicy green broth. Make this recipe today for a fantastic pork verde tonight!

Mexican cuisine is full of slow cooking stews and braised dishes, and I can’t stop making them. From asado to Instant Pot barbacoa and tinga de pollo to caldo de res, the meat ends up fork tender, moist, and incredibly delicious.

This Mexican pork chili known as chile verde is a dish that you simply have to taste to grasp just how delicious it is. The eyes don’t see everything here.

With tender chunks of boneless pork shoulder, roasted tomatillos, onion, and three types of spicy chiles, this is another in that long list of incredible Mexican foods. Whether you want to call it pork verde, green chile pork, or chili verde, it’s pure, unadulterated comfort food!

Boil the potatoes until they are fork tender, then add at the end with the remaining chile verde puree. The cooked beans should be added at the end as well.

To see the process of making this recipe from start to finish, just watch the video in the recipe card at the bottom of this post.

First, cube and season the pork. Slice all the peppers in half and remove the seeds. Also, remove the outer skin from the tomatillos, onion, and garlic, and cut the onion in half for easier blending.

Next, boil the tomatillos, chiles, and onion. Or you can char them on a grill or under a broiler for added flavor. Transfer to a blender or food processor along with the garlic and cilantro. Blend until smooth, then set aside.

Reminder: Reserve a cup of puree to add to the chili verde at the end of the cooking time.

Cilantro stems are full of flavor, so there’s no need to remove them. Rinse the entire bunch of cilantro, pat it dry with paper toweling, then include both leaves and stems in the puree.

Brown the pork in batches. It’s very important to get a good sear on the pork, because that’s where a lot of the tenderness and flavor of the meat come from.

It takes about 3 hours for the chili to finish cooking. To speed the process up, look in the recipe card for Instant Pot instructions!

When the meat is tender, stir in the reserved puree. At this point, you could also add in cooked beans or potatoes if you’d like to make a heartier meal.

What’s the difference between chile verde and chile colorado?

A chile verde sauce is typically made with green tomatillos rather than dried red chile, as opposed to a chile colorado sauce. Because of its deep red color, the sauce is known by the Spanish word for colorado, which translates as “red.”

Can I freeze chile verde?

Yes! Let the dish cool completely, then transfer to an airtight container. Freezer bags will also work, but make sure to squeeze all of the air out before storing. Chili verde keeps well in the freezer for 3-4 months.

When you’re ready to use, let it thaw in the refrigerator for at least a few hours or overnight. Reheat in the microwave or in a pot on the stove over medium heat until warmed all the way through.

Where is Chile Verde from?

The dish of Chile Verde refers to a Mexican stew made with green chiles. Originated in Northern Mexico, the dish was originally made with pork, but is now made with a variety of different meats depending on preference. 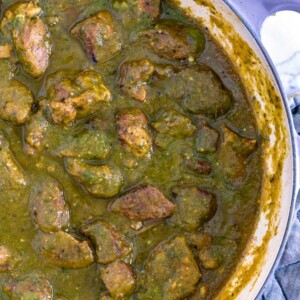 I made this for a local pie contest in the savory division. “Chili Verde Pot Pie” cut the pork into much smaller pieces, added small dice potatoes and small white beans. Topped it with a White Cheddar crust. First place win!

Way to go Joni, that’s fantastic! Loved the photo you sent me in the email too. Looking good!

Not sure what you’re talking about here?? What slurry?

There is no slurry? Great recipe!

Since you’re a “chef,” Rick, perhaps learn to read a recipe for accuracy b4 commenting on something not included in it?
This sounds amazing & I’m making it as soon as I feel better. Thanks Kevin, for the awesome recipe & instructions!

Super easy and just the best flavors. Thanks Susan!

Hey Kevin. Gonna try to make this but if I add cut of cubes of fresh potatoes when do you think I should add them to the 3 hour cooking time?

For a heartier green chili stew, consider adding cubed red potatoes or some black beans. Boil the potatoes until they are fork tender, then add at the end with the remaining chile verde puree. The cooked beans should be added at the end as well.

Really good and super easy. I always add a dollop of hot honey at the end of cooking time. It gives a tiny new dimension of flavor and color 🙂 Make some rice and fresh flour tortillas and a great big margarita! Tada!!

Sounds like an awesome dinner to me Lori. Thanks for coming back to let me know!

Most of the pork shoulder I’ve ever seen is sold either bone in or de-boned, a lot of time in a bag. I don’t believe I’ve ever seen it tied or in netting. I would refrain from using pork loin, it is way too lean.

Yes, pork shoulder is definitely the way to go with this dish. Just giving alternatives.

Can u add diced fried potatoes to this recipe

You certainly can Dede. Great idea. 🙂

Chili Verde is my very favorite Mexican dish. I followed the recipe, but needed more zing since the peppers I’ve been buying lately have very little heat. I added more chilis to no avail, and finally added about 12 oz of Hatch (hot) chilis, which did the trick! Also when browning the pork, I used more Cumin and salt than the recipe called for. When the pork and sauce were combined, I simmered them in a Crock Pot overnight. it came out perfect! Thanks for the great recipe!

So glad you enjoyed this one Sharon.

Kevin, the pork green chile stew was wonderful. Thanks for publishing that recipe

Much appreciated, thanks Sally. It’s always in rotation over here. 🙂

If I broil the vegetables instead of boiling do I just add the broth after they’re charred?

Yes, you got it. I also mentioned that in the Notes section on the recipe card with other tips for you. Thanks for giving this one a try and enjoy Myra! Cheers.

Hi Kevin,
Wow! This looks so good! My hubby and I would love this! I’m wondering if you have noticed a flavor difference between cooking on the stove and cooking in the Instant Pot. I’m tempted to make this soon but it is so hot I don’t want to have the stove on for 3 hrs. The Instant Pot is very convenient but I didn’t find cooking something like chili (that I usually cook for a long period) came out as flavorful in the IP. Your advice is much appreciated.