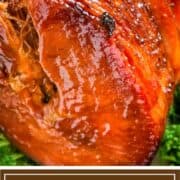 Upgrade your spiral ham with my orange ham glaze! It’s made with the usual suspects: orange juice, orange zest, and sugar. My secret? The added cinnamon and smoky chipotle powder!

Ham holds a special place in my heart. I love it in ham and bean soup, it’s so tasty in these ham and cheese lasagna roll ups, and I can’t get enough of it in my special crustless spinach quiche with ham. It’s also one of those quintessential holiday foods that always finds its way to the table. It’s a staple at Christmas and Easter parties, and I’ve also seen it served on Thanksgiving for folks who don’t like turkey (I know — but to each their own, right?)

Speaking of large gatherings, I’m already thinking about what to serve for the holidays. I typically like to pick up a spiral ham — a pre-cooked and pre-cut piece of meat — and then I add a little something special to make it my own. That’s how I came up with today’s recipe: my orange ham glaze for baked ham!

HOW TO MAKE ORANGE HAM GLAZE FOR BAKED HAM

Do You Put The Glaze On The Ham Before Or After You Bake It?

You should do a little bit of both! I like slathering on my glaze before I wrap the ham in aluminum foil for baking round 1. Then, I remove the ham, crank up the heat, baste it some more, and cook it uncovered for about 15 more minutes. The results are a perfectly caramelized outside and a perfectly tender inside.

What Can I Substitute For Orange Juice In Ham Glaze?

If you don’t have any OJ on hand or simply don’t want to use it, you can replace it with orange concentrate or orange extract combined with water. If you have an allergy and don’t want to use orange at all, you can always try replacing it with apple cider, pineapple juice, or even apple cider vinegar.

Do You Cover Ham When Baking?

You should start by leaving your ham covered in aluminum foil. This helps keep it juicy! You can finish off the roasting process by removing the cover during the last 15 minutes. This will make the outside nice and crunchy.

This recipe post, originally published on Kevin Is Cooking March, 2017, has been updated with new content, photos and/or video in October, 2022. 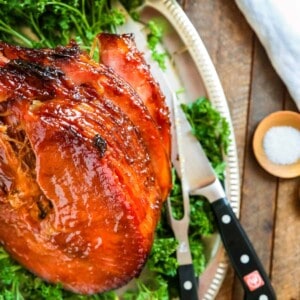 I can see your glaze working great on pork chops or even roasted duck as well as ham.

These sound awesome. Keep up your great work.

thanks Kevin we think this is better than ham in a bag we talked about doing.

Made this Ham for Christmas dinner, Best.Ham.Ever! The only thing I changed was I used chili powder instead of chipotle powder since I didn’t have any on hand. Thanks to this recipe, I have a new Christmas dinner tradition!

Kevin Is Cooking
Reply to  Nick

Hi Nick!
Thank you for stopping by to let me know! I love that you enjoyed it!

Or, slather an uncircumcised ham with spicy mustard, wrap it top to bottom in bread dough sealed, and bake it at 400F in the oven. Crack open the bread crock, discard and eat ham.

Oh my that sounds good!

Hello Kevin, I’m making the honey chipotle ham glaze. Can I substitute chipotle adobo sauce for the powdered chipotle? If so, how much?. Just discovered your site and am eager to try more of your recipes. Thanks, Elizabeth

Hi Elizabeth! I went ahead and moved your comment for this recipe from my About page to the recipe itself in case other readers had the same question. I would use 1 tablespoon of the adobo sauce myself to substitute for the chipotle powder. I know it may seem like a lot compared to the 1/2 tsp of powdered chipotle powder, but use what you think would be best. It’s the flavor here with a little heat and I think between the orange juice and sugar it would offset the sweetness. I haven’t tried it, but that would be a… Read more »

Okay Kevin, I’m going to totally turn this recipe on its head so tell me what you think… I have to make my ham in the slow cooker tomorrow because I need the room in my oven for other things AND I didn’t buy a spiral cut ham since they kind of dry out in the slow cooker (at least for me). I still want the flavors of this recipe so do you think I could modify this to cook in the slow cooker and then maybe make extra glaze to brush over at the end and then place in… Read more »

You always say the sweetest things Sally. Thanks so much. I think your idea is spot on myself. And trust me, make extra sauce, this stuff is so good!
Have a wonderful holiday dinner and hello to the family!

My dear Kevin!! This ham looks and sounds amazing!! I mean look at that glaze! just perfect. Hugs!!

Hi Gaila! It’s been a while. It has been SO CRAZY BUSY here. Apologies for not stopping by. Always nice to read you comments and see your smiling face. Cheers to a fantastic holiday.

That sounds like a delicious combination of flavors. You caught me at the right time! I’m planning to make a ham Easter.

Hey there Jeff, I hope this makes it to your guys Easter table! Enjoy!

This glaze sounds incredible – sticky, spicy goodness! We’re not really ham eaters, but I could totally see this glaze on other cuts of pork or even chicken!

I do a ham once or twice a year and make the most of it! Thanks Marissa. 🙂

5 star rating, no question. The recipe sounds so good, and your pictures are just amazing! Thanks for sharing.

Thank you so much Cecilia, you are really going to enjoy this one! 🙂

This looks perfect for Easter! I’m always trying to change up the glaze I make from year to year Kevin! I’ll need to give your recipe a try! I know anything coming from your kitchen is going to be awesome!

Awe, thanks so much MaryAnn. I love a dinner that provides a few residual meals the following days, too. The bits and pieces on the edges are basically meat candy! 🙂