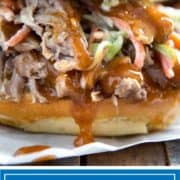 This Instant Pot Pulled Pork is a weeknight meal lifesaver! It takes less than an hour and makes 8 pulled pork sliders piled high with tender, juicy meat and coated in a decadent orange sauce. There won’t be a drop or scrap left behind!

We’re used to waiting hours for slow cooked meat dishes. But it doesn’t have to be that way! This recipe makes a tender, tangy serving of orange pulled pork sliders right in your Instant Pot.

The whole process takes 45 minutes. The Instant Pot pulled pork is cooked in a combination of lemon juice, soy sauce, white wine, and a bit of garlic and ginger. The result is juicy, flavorful meat that melts in your mouth.

The orange sauce is even easier to make. Just throw everything into a pan and let it simmer for just a bit. It all cooks down into a beautiful amber sauce that’s so rich and flavorful you’ll want to just eat it with a spoon! The aroma is AMAZING.

During these hot summer months, try this version that you can make on the grill during the summertime.

1. Make the Cooking Liquid. Whisk together all of the cooking liquid ingredients and let sit while preparing the Instant Pot.

2. Cook the Meat. Lay the meat in the pot and cover with the cooking liquid. Lock the lid and seal the venting valve. Cook using the “meat” setting.

3. Shred. Once cooking is complete, release the vent valve and uncover. Using two forks, shred the meat while searching for and removing excess fat. Cover with the lid while making the orange sauce so it stays warm.

4. Make the Orange Sauce. Add the sugar, orange juice and zest, cornstarch, cinnamon, salt, red pepper flakes, and cloves to your saucepan. Heat over medium and stir regularly until the mixture thickens.

5. Plate & Serve. Plate the buns, top with the Instant Pot pulled pork, and pour the orange sauce over the meat. Serve immediately!

Can I make slow cooker pulled pork in an Instant Pot?

Yes, you can easily convert slow cooker pulled pork slider recipes to work with your Instant Pot. The general rule of thumb is that 8 hours of slow cooking time on low, or 4 hours on high, translates to 25-30 minutes of cook time in the Instant Pot.

Why is my Instant Pot pulled pork tough?

You likely have not given it enough time to cook. The longer you allow the meat to cook in the cooking liquid, the more tender it becomes. So if the result is a bit tougher than you’d like and is not shredding easily, give it a bit more time.

Luckily, the process is much quicker in the Instant Pot. Make sure that your Instant Pot is set to “sealing,” not “venting,” so that the meat cooks properly.

How do I reheat Instant Pot pulled pork sliders?

If you foresee having leftovers, I recommend storing them without the sauce. Return the meat to the pot along with a bit of water and heat with the “steam” function. If you’ve retained any of the cooking liquid, use that instead. You can also whip up a bit more in no time!

If you happen to have leftovers with the sauce already poured over top, reheat in the microwave in 30 second bursts.

This recipe post, originally published on Kevin Is Cooking March, 2017, has been updated with new content, photos and/or video in July, 2022. 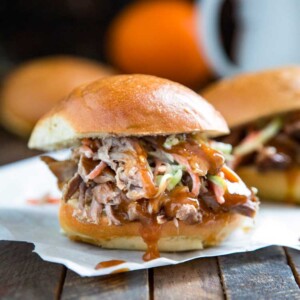 If you’re converting meat from a slow cooker to an Instant Pot, follow this rule: if the meat dish cooks in eight hours on low or four hours on high in the slow cooker, it will cook in 25-30 minutes in the Instant Pot. Make sure the Instant Pot setting reads “sealing” and not “venting” to ensure it’s cooked properly.

I love the cooking sauce, but the orange sauce is way too sweet and the spices don’t go with the meat. I loved the taste of the pork, but had to do a lot of doctoring on the orange sauce.

Appreciate you coming back to let me know, although this happens to be one of my all-time favorites and think the sauce is AMAZING as written. Glad there’s something for everyone Nancy. Cheers!

I’ve been making this one for years now and it always has them coming back for more Kevin. That sauce, too is simply amazing on EVERYTHING!

Excellent Marty, so happy you enjoy this one!

Oh, yeah! I love a good pulled pork sandwich…and it’s almost warm enough to pull out the smoker! Saving this orange sauce idea for sure. Yum!

I’ve had the Instant Pot for 2 years now and it’s perfect for slow cooking if the weather is bad outside and a smoker is out of the question. The orange sauce though… holy smokes it’s tasty stuff. On everything. 😉 Thanks Dave!

You can never go wrong with pulled pork, and the orange sauce sounds like a nice twist/shake-up from traditional bbq sauce. Thanks for the recipe Kevin!

Thanks Kevin This pork is so flavorful and then add that sauce and you got a sure win. Really.

I’ve fallen in love with my Instant Pot and have been looking for more recipes to make with it…this pulled pork is definitely coming up soon! Looks amazing…especially that swoon worthy orange sauce!

It’s so easy and this sauce is truly EVERYTHING. Enjoy Rachael.

This is pretty spectacular, Kevin! I cannot say I do love meat (I’m more a poultry guy) but these pictures have made me crave for something like that (Hope you’ve saved one for me). And I like this refreshing tangy citrus sauce, too!

I’d gladly share with you guys if you ever made it South Ben. It’s one of my all-time favorites!

This post is almost cruel, Kevin. I’m sitting at my desk at 5:03, won’t be having dinner for a couple more hours and these photos are making me SO HANGRY!!! Everything about this is making my mouth water!

Haha! This is not only super easy, and I put this sauce on roasted veggies just a side. Perfect!

Smithfield most DEFINITELY makes the best pork, and clearly YOU make the best pulled pork sammies, Kevin! These look AMAZING. Serious drool-fest happening over here! I legit want to bathe in that orange sauce. Can’t wait to give this a try! Cheers, buddy! Pinned (obviously)

I still have leftovers, come on over!

Gimme that orange sauce – I could pour that on everything. This looks so delicious!

Thanks Karen, it hits all the flavor notes – so good and easy to make, too! 🙂

I just made pulled pork last weekend Kevin! It’s one of our crockpot favorites. I will definitely need to try your orange sauce next time. It sounds delicious!

I hope you do give it a try MaryAnn, it’s a fantastic sauce and the warm spices give it an extra hit of love! Cheers! 🙂