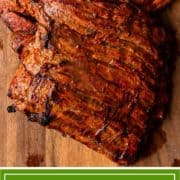 The Chipotle restaurant chain used to offer an amazing carne asada steak on their menu, but it’s no longer a regular menu item. It’s been relegated to seasonal availability only. You can wait until the next time it’s offered to enjoy Chipotle carne asada, but you don’t have to because my recipe is better than theirs!

Mexican steak dinners are one of the best ways to enjoy a flavorful cut of beef without spending a lot of money.

Meals like Mexican skirt steak and grilled steak fajitas are delicious, easy-to-make Mexican meals. Even better, they are budget friendly enough to enjoy as a nice weeknight dinner!

When it comes to Mexican steak dinners, carne asada, which translates in English to “grilled meat,” is arguably the best of the best!

To make it, a thin cut of steak is marinated in citrus juice, chile peppers and seasonings, then cooked on a grill.

Using an affordable, quick-cooking cut of beef, you can make this meal at home easily, and it tastes SO much better than Chipotle carne asada!

One reason this dish is so popular is the amazing flavor that comes from just a few simple ingredients. It’s not just the meat that makes the dish, it’s also the flavorful steak marinade!

People often ask what kind of meat carne asada is. I use skirt steak for my asada, but flank steak and flap steak are also popular choices. Honestly though, any thin cut of lean beef will work.

Skirt steak has a higher percentage of fat than flank steak. Of course, fat means flavor, but it also means it is a bit higher in fat and calories.

Flap steak is also known as chuck flap or flap meat. This flavorful cut of beef comes from a bottom sirloin butt cut. It’s typically cut very thin and tends to be a bit chewier than flank and skirt steak.

For extra flavor, I marinate the steak TWO times; first in beer, then in a flavorful carne asada marinade.

As for the beer, I use Corona, but use your favorite variety. If you would rather not use alcohol for the marinade, that’s fine. You can swap it out for beef stock or broth, or use an alcohol-free beer if that’s an option for you.

The base ingredients in the second marinade are fresh lime and orange juice, plus two types of chile peppers; serrano and guajillo. I also use a couple of basic seasonings; cumin, onion powder, garlic, plus salt and pepper.

For the complete ingredient list and information on how long to marinate the carne asada meat, see my carne asada marinade recipe post.

How to grill carne asada

Here are a few tips to help you create the best asada ever:

One of the keys to the incredible flavor and consistency of the Chipotle carne asada is that the restaurant cooks the meat at an incredibly high temperature. Commercial restaurant-quality grill tops have that in their favor.

Unless you have a high-tech grill that heats up instantly, it’s important to wait for the grill grates to get searing hot before you add the food. Don’t add the meat too early!

One common grilling mistake that many people make is moving the meat around on the grill. This serves no purpose; it only prevents the flavorful crust from forming.

Again, you want to avoid moving or flipping the meat before it’s finished searing. After searing it on the first side, flip the steak over, then leave it alone until it’s cooked to your preferred doneness.

Before you cut into your carne asada steak, you need to let it rest for at least 10 minutes. As it rests, the meat reabsorbs all of its juices. If you cut into it before this happens, all of the juices will escape, leaving you with a dry, chewy piece of meat.

How to cut perfect slices of steak

After the steak rests and just before you’re ready to serve, you will cut the carne asada.

Make very thin slices against the grain. The grain is the name for the fine lines of muscle fiber you see in the meat.

By cutting across those fibers rather than alongside them, you will have juicy, melt-in-your-mouth bites of delicious Mexican steak!

Serving suggestions for your “better than” chipotle carne asada

There’s no denying that this Mexican steak dinner tastes fantastic as is.

I like to serve it with grilled tortillas and a few Mexican side dishes like authentic refried beans and ensalada de nopales (cactus salad).

If you have any steak leftover, store it in a covered container in the refrigerator. Either use it up or freeze it within 5 days. Once frozen, it should keep well for a couple of months. 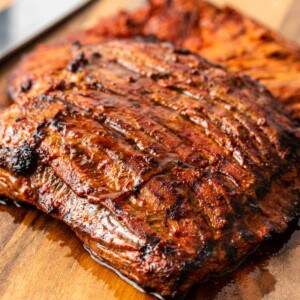 Would I follow the same amount of time if I used a cast iron pan on the stove?

As long as the final internal temperature is 135°F you’ll be fine using a cast iron pan Judy!

I made it but had to shorten the marinade time to four hours and exchanged the pepper varieties with jalapeno and dried arbol chilis but it was good and my family members, not liking too much spice, loved it. I’ve been approved to make this recipe again in the future.

So glad you enjoyed this one Vick. Appreciate you taking the time to let me know!

there is no mention of tortillas in the ingredient list

Kevin Is Cooking
Reply to  Laura

Use 6-8 inch grilled tortillas, flour or corn, it’s your preference. Hope you enjoy! 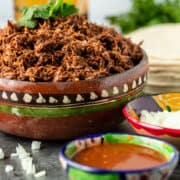