These Pumpkin Butter Pecan Cinnamon Rolls are just simply a warm, fluffy treat to wake up to. Heck we even had one for dessert one evening, too!

It usually starts with a picture for me and the one I saw for these cinnamon rolls got my mind working. How great is it to wake up to warm, fresh-from-the-oven breakfast rolls? These get a big flavor boost from my pumpkin butter and added pecans for that holiday breakfast treat.

I first saw these over on Jo Cooks and she claimed these were “a cinnabon copycat recipe” and she delivered her promise.

I really enjoy trying others’ recipes and adding my own little twist to it if I can. I actually made these twice as I like to try their version and then implement my own and see how it goes and adjust the recipe. See I had some pumpkin butter leftover from making these Pumpkin Scones with Maple Icing and wanted to put it to use and that is how these Pumpkin Butter Pecan Cinnamon Rolls came to be.

Where cooking is a great free-style way to go when making alterations to a recipe or getting creative, baking is definitely a science and amounts need to be sifted and measured correctly, or that’s when accidents, or rather dismal failures, happen.

This dough is super tacky and wet, but proofed beautifully, and quite a bit, too. Nice and the aroma of the yeast was great.

After I rolled out the dough I realized I hadn’t truly made a rectangle as suggested, but oh well!

I spread the pumpkin butter over the soft and fluffy dough, sprinkled the brown sugar, chopped pecans and cinnamon and rolled this bad boy up.

I like to use dental floss to make a clean cut when working with dough and this made 12 rolls that I laid out all snug in a greased baking stone.

After baking these up the cream cheese glaze was spread on and the salivating began.

With or without coffee or a cup of tea, these are just superb in texture and taste. Super fluffy and not a tough dough, but a sweet one that raised up nice due to the yeast. The pumpkin butter spread on the interior was all swirled and the chopped pecans were a nice texture crunch. That cream cheese glaze could have been eaten on it’s own it’s that good. Beware! It may look like a small amount, but it covers all 12 of these in a 13×9″ pan no problem.

Serve these up this holiday season for yourself, family or friends. Enjoy! 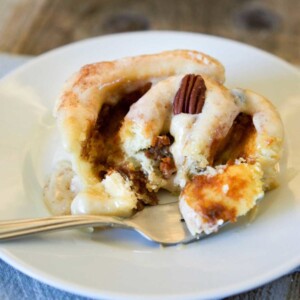 These photos, Kevin!! I can smell these ooey gooey cinnamon rolls right through my monitor!! These are a must try!!

I whole heartedly agree Marissa. Especially for Thanksgiving morning sipping some coffee. We are up here in Beavercreek enjoying the weather and hiking with family this Thanksgiving. I may need to bake a batch!

Hmm … I’ve got some pumpkin butter in thr fridge. Should I?

By all means yes!

Cinnamon rolls are a great way to start the day… and end it if you ask me. 🙂 Loving your pumpkin butter and pecan additions! These are perfect for the season and would be great to leave out for house guests over the holiday! Thanks for making me drool, Kevin! Warm wishes for a beautiful Thanksgiving! <3

The same to you and yours Chey and thanks so much! I agree, they are just as good nuked for 30 seconds and eaten as a warm, gooey dessert! 😉

Oh my god, cinnamon and pumpkin! This is a must try Kevin, and I’m tired of saying this, I need to start working on it instead! Pinned!

Fresh from the oven, you and your family will LOVE them Farida!

Oh my goodness, another fabulous stuff, Kevin! Did you open your bakery yet?:) Pumpkin, pecans, cream cheese, and cinnamon. I’m completely sold!

Thank you so much Ben. We could have you up in the North, Dave from Spiced on the East Coast and I could be West coast. It would be a Bi-coastal, International bakery!

Cinnamon rolls are one of my all-time favorites, Kevin! And the holidays absolutely require cinnamon rolls for breakfast…it’s a Santa requirement I think! 🙂 But that pumpkin butter you added to these is insane. I want to eat that with a spoon…even if it means Santa doesn’t get any this year. Haha! #WolfpackSantaSnacks

Hey Kevin! You must have read my mind! I realized the other day that I hadn’t made cinnamon rolls in quite a while and since I have jars of caramel pecan apple butter I decided to us it and WOW were they good! Now I have a good excuse (as if I need one) to make more rolls using pumpkin puree! Thank you! 🙂

Now that sounds amazing, Caramel Pecan Apple Butter! I’d slather that on this dough no problem! The pumpkin butter is so good with these, much better than just pumpkin purée and so easy to make. Hope you guys are going to be surrounded by family and friends this Thanksgiving!

Oh boy…you set the stage right out of the gate. Of course I want to wake up to warm, fresh-from-the-oven breakfast rolls! Especially rolls that look like these! I got excited thinking about the aroma of the yeast, let alone how these must have perfumed the entire house while they were baking. This is a winner, my friend! Pinned!

There is really something about that aroma, right? Fresh, warm and just covered with that cream cheese icing, too. Good stuff! Thanks Annie, and I hope you and your family have a wonderful Thanksgiving holiday.