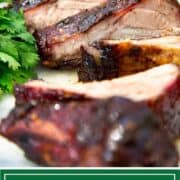 My jerk pork Jamaican ribs have a mouthwatering sweet and spicy seasoning of scotch bonnet peppers, allspice, and thyme. This spicy baby back ribs recipe is not for the faint of heart!

Grilling and smoking season is upon us! If you’re wanting to go beyond the traditional grilled pork chops and smoked baby back ribs, it’s a great time to make Jamaican Jerk pork.

What is Jamaican Jerk?

Jerk seasoning has three primary ingredients: chile peppers, allspice berry, and thyme.  After researching and testing many different recipes, I learned that allspice berries and Scotch Bonnet peppers are key to the authentic flavor of Jamaican jerk.

Peggy Trowbridge Filippone wrote a great description of what Jamaican “jerk” is in About.com’s cooking section:

“Jerk is the process of spicing and grilling meats, poultry, and even vegetables, although the most popular are jerk pork and jerk chicken. The resulting food yields a spicy-sweet flavor and a tender texture.”

She also wrote that the history of the term jerk is said to come from the word charqui, a Spanish term for jerked or dried meat, which eventually became jerky in English. Like most Caribbean islands, Jamaican foods are derivative of many different settlement cultures, including British, Dutch, French, Spanish, East Indian, West African, Portuguese, and Chinese.

Beware, the seasoning is VERY spicy and not for the faint of heart (or taste buds)! After testing several renditions, here is my favorite version.

Because I already have a recipe for One Pan Jerk Chicken and Rice, I decided to make baby back Jamaican ribs this time. I prefer pork loin ribs (aka baby back), but you can use spare ribs (also known as country ribs) if you’d like.

The ribs marinate overnight, which allows the flavors to penetrate deep into the meat for maximum flavor. These do not disappoint and can be cooked on the grill or in the oven.

In addition to spicy heat, there’s a lot of flavor in Jamaican jerk pork. If you don’t tolerate spicy food well, you can always cut the amount of peppers to suit your tastes. You can’t remove peppers after the fact, so start with a small amount and scale up if it isn’t spicy enough to suit your tastes.

If you aren’t careful, the oils in chili peppers can and will burn your skin. To help prevent this from happening, I recommend that you wear kitchen gloves when you clean the peppers.

Video: How to Cook Jerk Pork

To watch the process from start to finish, check out the video in the recipe card at the bottom of this post!

If you’re unable to grill outdoors these can be made in the oven, see instructions in the recipe card below.

At this point, the Jamaican jerk pork ribs should be tender enough to pull apart with your fingers. You want the ribs to have an internal temperature of 145°F. Allow the meat to rest 5-10 minutes prior to cutting.

If you like Jamaican food, try my Jamaican Pepper Sauce or this Caribbean inspired Tropical Pineapple Chicken.

For more ribs recipes check out my Sweet and Sour Sticky Ribs or these Pineapple Five Spice Pork Ribs.

If there are any leftover ribs, strip the jerk pork from the bones and make BBQ Pork with Cheesy Grits. The leftover pork is shredded and simmered in BBQ sauce and served over cheesy grits for a Southern inspired dinner that’s sure to satisfy.
Enjoy!

This recipe post, originally published on Kevin Is Cooking on September 2013, was last updated on May 5, 2021. 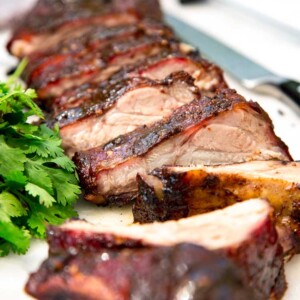 Thanks, I love Jerk food from when I went to Jamaica. Going to try, as the bootle of Jerk Marinade from Waldos didn’t cut it for me.

Kevin I have tried a few of your recipes with the most recent being the beef enchiladas and based on the delicious outcomes, I am coming back toYour site weekly to follow the next one. Hit a slight issue in this one – I don’t eat pork. Would the result be equally good if I used beef?

Looking forward to your response and thank you for such detailed recipes with home made sauces that make all the difference…I follow
both your sites. Glad I do!!

Just prepped this. Man, that paste smells amazing!
Can’t wait to fire up the grill tomorrow.

Kevin Is Cooking
Reply to  Gary

How did it turn out Gary?

I’m trying to eat these through the screen with my eyes, but it’s not working! I guess I’ll just have to make them myself soon… they look incredible. Plus hey, I’m always looking for an excuse to fire up the grill, and I’d say these look like a pretty decent excuse 🙂

Well if you do make these, I hope hope they meet with your approval Fredrick! Let me know if they are authentic enough for you seeing as you are there. 🙂

He’s not kidding about the gloves when you touch a scotch bonnet pepper with bare hands (I bought a big bag of them on Amazon a while back). I thought I was brave and tough — within hours, I had big red welts all over my face. I used the Walkerswood scotch bonnet sauce for mine tonight (also bought on Amazon). There are many store/national-branded “jerk” marinades, but they’e all fake and dumbed down to local sensibilities — heavy on the sweet, low on the heat. And part of the jerk experience is the combination of heat and sweet. I’ve… Read more »

Man, so sorry to read your Scotch Bonnet Pepper woes there Daryl. That sounded horrible. Gloves are KEY! Thanks for stopping by, too.

I haven’t tried this recipe yet, but I think I will. My husband went to school in Jamaica and considers himself a true jerk lover. I’ve made jerk chicken in the past that reminded him of being in Jamaica. I will let you know if he feels the same about these!

On a side note, I have to giggle at all the comments about scotch bonnet peppers. For those that know jerk, you know that this is the pepper used in true recipes. While it can be spicy, the heat is nice. 🙂

So glad to read you’re giving this a try. please let me know what you think. I love and and I love flavor, so foods like this are perfect. Thanks C.

Seriously it’s warm, but surprisingly not as hot as you’d think. I know you could handle this Jeff. 🙂

Hey Kevin! These are gorgeous ribs! I’m afraid I would have to scale back the heat some. I like spicy, but when dishes approach this heat level I just can’t deal. Yeah, you can call me a sissy! I would also require a nice cold beer (or two). 🙂

Thanks Dorothy!! LOVE ribs! It’s hot but not mouth watering burning. If you like cut the pepper sin half, you should be fine. Hello to Gary! 🙂

The flavours in this one sound absolutely amazing, Kevin! And scotch bonnet peppers? Bring the heat! You know the recipe is good when I want to grab some right through my screen 😉 Pinned! Have a great week, my friend!

It’s a wonderful heat, not a burning heat. FLAVOR big time! Thanks Dawn!

I am looking at the ingredients and the photos and that bowl of rob/marinade looks too liquidy for the ingredients. What other liquid ingredient is missing? Soy sauce? More oil? Pineapple Juice?

Nope, it’s exactly as stated. No other liquids added Jim. It turns into a tar-like spread. Be sure to use gloves! Thanks too for reminding me of this one, haven’t had it in a while. Just wrapped it and it’s marinating for tomorrow’s dinner!

Do I have to use a gas grill or smoker ????.Can a regular charcoal grill be used???

Definitely Myanka, charcoal grill would be great. There are so many different ideas on smoking, times and temperatures, so feel free to use what best works for you and your desired doneness (see other comments!). The recipe is mainly to share with you the Jamaican Jerk. Enjoy!

Hi J, thanks for stopping by. After my own recipe studies and tests on different ribs, this is the time that worked for the best, fall off the bone rib for me on the grill and smoker. While most set their temp @ 225°F I use 250°F and less time. Feel free to do a search on the internet and you will find numerous times and temps, so I suggest you do what works best for you and your desired doneness. As Meathead Goldwyn says in his book The Science of Great Barbecue and Grilling: “Every grill and smoker is… Read more »