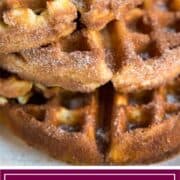 Churro Waffles are just the thing for when you want to have dessert for breakfast! This cinnamon sugar waffle recipe is simple to make, but complex in flavor and texture. It involves an airy whipped batter and a buttery cinnamon sugar finish. And to top it all off? Pineapple and caramel!

With cinnamon, sugar, caramel, and a buttery batter, these churro waffles are really something special. But they’re waffles and served with fruit, so we’re allowed to say that it’s a breakfast dish.

Each waffle is fantastically fluffy and light, yet it comes with a crunch due to the cinnamon and sugar coating. With the fresh, crisp pineapple and whipped cream, the different textures and levels of sweetness are the perfect way to start your day.

You can use any caramel sauce you can buy in the store, or try making your own. And, though I haven’t tried it myself, I’m sure chocolate sauce would be just as tasty.

My Churro Chips are a very similar sweet treat that has more of a crunch than these cinnamon sugar waffles do. Give them a try!

HOW TO MAKE CHURRO WAFFLES

1. Prepare the Batter Ingredients. Sift the dry ingredients into a bowl: the flour, baking powder, baking soda, and salt. In a separate bowl, mix together the wet ingredients: the egg yolks, milk, butter, and vanilla. Set both aside while preparing the toppings.

2. Make the Toppings. Melt the butter in a microwave safe bowl. In another bowl, toss the pineapple with the caramel sauce. In a third bowl, mix together the cinnamon and sugar. Set all of these aside.

3. Whip the Egg Whites. Whisk the egg whites – this will be much easier with an electric mixer. Once peaks begin to form, gradually add the sugar until the peaks become stiff and solid.

4. Mix the Batter. Combine the wet and dry batter ingredients. Once combined, slowly incorporate the whipped egg whites. Only fold until combined, and don’t mix more than necessary.

5. Make & Butter the Waffles. Use this batter to make waffles per the instructions on your specific waffle maker. Then take each waffle and brush with melted butter.

6. Coat. Lay each buttered waffle in the cinnamon and sugar mixture, flipping so both sides are covered. Press firmly into the mixture so that it coats the surface.

7. Serve. Plate the churro waffles with a healthy helping of caramel pineapples, and serve with whipped cream.

What are churro waffles?

Churro waffles are simply cinnamon sugar waffles. Churro batter is prepared differently than your average waffle mix: the difference lies in the use of boiling water for that unique, chewy texture that churros have.

For this recipe, however, we simply make a regular waffle and give it a buttery, cinnamony, sugary topping that is reminiscent of churros.

How long does waffle batter last in the refrigerator?

The batter used in this recipe will keep for up to 5 days if stored properly and refrigerated. If you plan on using throughout the week, I recommend storing in a squeezable tube for easy use. You’ll have less mess (and fewer dishes) that way.

What other fruit can I serve with churro waffles?

Cinnamon sugar waffles are candidates for some delicious fruity toppings! I use pineapple here for color, festivity, and a taste of something special. But there are plenty of fruits that go well with this recipe. Banana, strawberries, and raspberries are the first three that come to mind.

Apples that have been caramelized and tossed in the caramel sauce would be excellent as well. 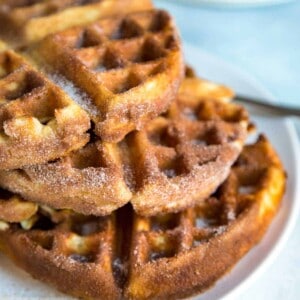 Breakfast or dessert, these are a great one… thanks Patti!

What a great way to change up breakfast! Cannot wait to try it!

They are a great way to change it up!

Love that you whipped the egg whites to make these churro waffles extra light, this is a stunning recipe Kevin….impressive work as always

You honor me Albert, many thanks! 🙂
By the way, your Seared Scallops Recipe with Champagne Sauce look amazing, a must try!