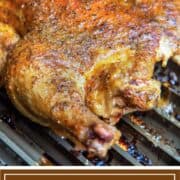 Grilled Spatchcock Chicken is moist and juicy, seasoned with a salty and spicy dry rub that crisps up the skin for an abundance of flavor and texture. Spatchcocking cuts down on the cooking time so you can spend less time at the grill, and more time at the table!

Spatchcocking is a quick, simple way to flatten a whole chicken or turkey before cooking. With a spatchcocked chicken, you get an even thickness that allows for faster grilling and even heat distribution throughout.

With this method, it’s also easy to trim excess fat and meat as you go. These trimmings, along with the backbone removed during the process, are fantastic for freezing and using later to make soup stock. It’s very frugal and cost-effective!

My spatchcock chicken recipe includes a step-by-step guide, including a how-to video (see below in recipe card), on how to flatten and grill a juicy, moist whole chicken with a crisp and flavorful skin.

For this recipe, I use a basic dry rub of salt, pepper, paprika, and a couple of other spices and seasonings that’s perfect for grilling. I recommend serving with my Alabama White Sauce, a tangy mayo BBQ sauce with just a touch of heat.

HOW TO GRILL SPATCHCOCK CHICKEN WITH INDIRECT HEAT

With a Gas Grill:  Create a “2 Zone” set up in one of two ways. You can light half the grill so that it reaches the desired temperature, laying the meat on the unlit side. Alternatively, you can light both sides of a grill while leaving the center unlit, placing the meat in the center where the temperature is lowest.

With a Charcoal BBQ or Smoker:  Light the charcoal. Similar to the directions above, move the charcoal either to one side of the grill or to both sides while making a space in the center that is unlit. Place the meat where it is not above any lit charcoal. Use a drip pan below the meat.

HOW TO MAKE SPATCHCOCK CHICKEN

What is the point of a spatchcocked chicken?

When spatchcocking poultry, you remove the backbone and flatten the bird. This allows it to cook more quickly and evenly. It also helps the meat stay nice and juicy while developing a crisp outer layer in the process.

Can you roast a spatchcock chicken?

Yes. Put the spatchcocked chicken into the oven at 450°F for 30-35 minutes. Check the internal temperature of the meat — once it reaches 160°F, remove from the oven and let rest for at least 15 minutes while the meat continues cooking up to 165°F.

How long does it take to grill spatchcock chicken?

It takes 40-45 minutes of grill time, plus an additional 15 minutes for the meat to rest before slicing and serving. 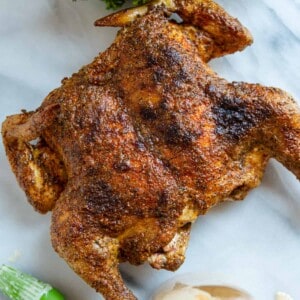 I have made this twice now, and it will be made again. Not only is the chicken easy to make, it is super tasty at a summer BBQ. The first time I served it I forgot to put out the sauce, so I had to serve it again because the Alabama White BBQ Sauce is not to be passed over! Guests were raving. One of the best BBQ recipes I have ever made.

Now that’s high praise and I’ll take it! Kidding aside, thanks so much for coming back to let me know Tony. 🙂

I made this for dinner this evening, along with the white sauce. It practically fell apart after the 15 minute resting time. It was so juicy and flavorful! Definitely a repeat…and I have other marinade ideas to try too!

Excellent! So happy you enjoyed this one Danielle!

Hi! Is there any way to make ahead and rewarm with a similar result? Thanks!

Definitely. I would let it come to room temp and reheat, maybe even a 1 minute under the broiler to crisp up the skin, too.

Just be sure final internal temp is 165°F Aaron.

I made this tonight for dinner and it was fabulous!! I cheated and bought a spatchcock chicken at Whole Foods on sale. This recipe is a keeper!

We tried this recipe this evening and it was incredible!!!
It was the first chicken we’ve done in the smoker , the rub was perfect !!!
Can’t wait to try it again!!!

Kevin Is Cooking
Reply to  Sharon

I am so glad you enjoyed it! I hope you try it again soon!

This was just terrific! A heads-up on timing … my chix was 6# and so I planned for longer using the indirect gas/propane grill method (center fires off). Did 20 minute check-ins, and after 1 hour, I rotated the bird 90 degrees and did turn on the center fires to ‘lowest’. After another 15 minutes, the chix was perfect – a little charred on the skin which I love, but still sooo juicy and tender. Thanks for the video re: cutting into the breast bone – that was a new tip to me (an ‘old’ cook – LOL).

Kevin Is Cooking
Reply to  Betsy

Hmmm, that hasn’t been my experience.

Hi Kevin. I’m making this chicken tonight on my Traeger grill. I’m curious about the photo you posted above the recipe…the one where it appears you’re basting the cooked chicken with a cremy looking sauce? What is that? It looks like a secret I would like to know more about. Please and thank you.

Excellent Jenny! The sauce I used on the spatchcocked chicken is my Alabama White Sauce. Hope you enjoy it!

And that was using a 4 pound chicken? That is a crazy long time spatchcocked. I would think the chicken would be dried out. Sorry, that’s just never happened for me.

Did you do direct or indirect heat on the grill?

That would be indirect heat Mike. I’ve updated the recipe card to reflect. Thanks and enjoy!

Very tasty! Reminiscent of shake’n bake but waaaay better. I put chicken on foil in bbq for easy manipulation and to catch juices to baste instead of sauce. Thanks!

Kevin Is Cooking
Reply to  Melissa

Thank you Melissa! That is a great idea to have that extra flavor!