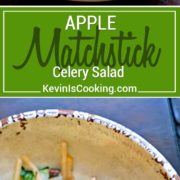 Need a refreshing, quick and easy salad, then this Matchstick Apple and Celery Salad is the one for you!

I also love the simplicity of it. Made it in a hot second, too. Easy is good, very good.

I always keep in my refrigerator a batch of some easy pickled red onions. I just slice one red onion very thin, cover the onion slices with rice wine vinegar and allow to marinate for a minimum of 30 minutes and keep them, if they last that long, for at least a week refrigerated. I use them in everything.

I had some cold, Pink Lady apples ready to go and broke out my trusty mandolin. I wanted something matchstick in shape and went to work.

I sliced the celery on the bias fairly thin too.

Adding some honey to a bit of the red onion rice wine vinegar juice, some olive oil, a little kosher salt and fresh cracked black pepper made for the vinaigrette.

I diced some pecans and broke out some fresh herbs. My choices were mint, cilantro and basil. Chop, chop and in they went. I allowed this to marinate while the Chorizo Meatballs baked, which was 18 minutes and served it up. Enjoy! 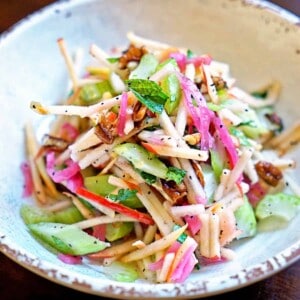 Oh man this looks amazing! I have some celery I need to use up!

I made this yesterday for a Thanksgiving shindig and it went over really well! It was such a nice, crisp flavor that contrasted well with all of those thick, rich flavors of the holiday. I added a bit more honey, some black sea same seeds and just a dash of seasame oil. I will definitely be making this again! So fresh!

So happy read that this worked out and you enjoyed it for the holiday table. Love that sesame seed add, too! 🙂

Hey Kevin! This is my kind of salad! I always have celery on hand, I use it in so many dishes. I also can pickled onions so I have a supply of them in the basement! I have some Granny Smith apples leftover from a pie I made a few days ago and now I know what to do with them!

I am seriously loving this flavor combination, Kevin! Plus, we all know that matchstick everything tastes better! I’m thinking this is the perfect spring lunch. Can you send me some? Thanks! 🙂

Ya know David, I have no idea how or why this posted, it’s from back in September of last year? Anyways the real recipe for today is up on the blog now – Macadamia Apple Butter Spread. Sorry for any confusion, but that salad is one of my favorites. Bright, great flavors and definitely perfect for Spring!