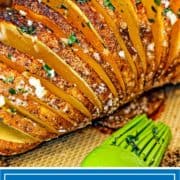 The thinly sliced and seasoned Hasselback potato turns out crispy on the outside and tender on the inside. Almost like thick potato chips, but better! Use my tips and kitchen hacks to help you easily make this impressive, tasty side dish!

What is a hasselback potato?

This name for this tasty side dish comes from the Swedish word Hasselbacken, the Stockholm restaurant where it was first served.

Crispy on the outside and tender soft on the inside, the baked potato slices are similar to thick potato chips, but the slices are still attached to the base.

The seasonings and fillings for my hasselback potatoes recipe are completely up to your imagination! They can be as simple as a bit of salt and pepper, or stuff fillings between the slices. Use seasonings, herbs, butter, bacon, cheese, and anything else you want!

Just like making a Perfect Baked Potato, there are just a few basic steps to making a simple yet amazingly delicious potato side dish.

How to make perfect hasselback potatoes

I can’t tell you how many times I have cut through and ruined the concept. Slice as many times as you can, making thin cuts along the potato.

Then what I do is get two chop sticks or any thin piece of wood or spoon etc. that will allow you to cut through the potato and stop at the chopstick on either side of the potato. Works like magic!

I can’t tell you how many times I have cut through and ruined the concept. Slice as many times as you can, making thin cuts along the potato, see below.

These tips will help reduce the chance of you injuring yourself with a sharp knife.

The first tip is to use a vegetable holder/slicer. It’s a fantastic, inexpensive kitchen tool that stabilizes the potato to prevent it from slipping. Plus, it gives you a simpler way to cut even slices.

In addition to using a hasselback potato slicer, before you start cutting, slice off a small portion from the base of the potato.

Watch the hasselback potatoes recipe video in the recipe card below to see how easy it is. Just be careful and take your time – it’s really easy!

How to Prevent Potatoes (and Other Produce) from Turning Brown

Some fruits (like apples and avocados) as well as vegetables (like potatoes) discolor when they’re exposed to air. The scientific name for this is oxidation.

To help slow the process with hasselback potatoes, after slicing them, place the raw potatoes into a bowl of water with a little bit of lemon juice or white vinegar.

Soaking the sliced potatoes for a few hours in that same vinegar water will also draw out the starch. As a result, your potatoes will bake up crispier!

Use Lots of Butter

Melted butter brushed over the potato slices adds a richness and flavor that can’t be beat. You even use some of my Herb Butter or Bleu Cheese Butter for added flavor!

Using potatoes that are the same size helps them cook at the same time as well as assists in keeping them uniform in color and crispness. No one wants an under or over cooked potato!

Be Careful Not to Slice Through the Entire Potato

By using my useful kitchen hack of chopsticks placed on either side of the potato when slicing, it doesn’t allow the knife to cut entirely through the potato and keeps them together. The arch hack helps so the thin slices fan out and get evenly crispy and golden brown.

Serving Suggestions
Just like mashed or twice baked potatoes, this hasselback potato side dish is delicious with grilled ribeye steak and grilled corn on the cob. Not only delicious, but it will also impress your guests. 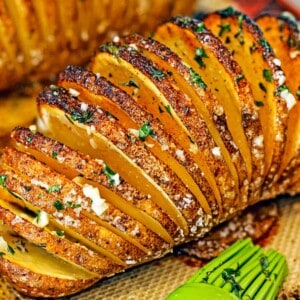 How to Make a Hasselback Potato

I made these potatoes when we had guests for dinner and they were a huge hit. They looked so impressive on the plate.
I was asked how I made them and gave them the recipe. I must say these potatoes are absolutely delicious and I will be making them again.
thank you for posting this yummy recipe.

Yay! So happy they were a hit!

I made these for a special dinner (son’s birthday) with filet mignon and they were delicious. BUT the dogs thought I was burning down the house with the smoke created by butter melting in a 425 oven! Any tips on creating smoke that sets off the alarms?

While I haven’t had that happen, I would suggest basting less on before baking, then more after before serving. You could always put some water in the pan your are using as well. BTW, that dinner is my all-time favorite!

If you want to soak them in lemon juice and vinegar after slicing them do you first cover them with the oil and kosher salt? Or after slicing and soaking them?

Hi Marci, you want to soak them in vinegar and lemon juice first. Then pat the potatoes dry with paper towel before covering them in oil and salt. Hope this helps!

Kevin, these are great! Mine didn’t cook as soft as I’d prefer the first time, but that’s an issue we’re having with the countertop oven not heating to correct temp. Otherwise they were buttery and delish! I personally love eating all the fun little slices. Next time I may broil them at the finish to get an extra crisp (again due to oven issues). Thanks for introducing me to the Hasselback! 🙂

So happy you gave these a try Sarah and thanks so much for coming back to let me know!

thank you for all the potato tips. I am 64 years old, with 5 kids and 12 grand kids. Never have I heard of the tips you gave, Thank you,I love to learn new things, love your blog

Thanks for making my day with this comment Kathleen. All the best!

I wanted to make these for an event in another city and 2 days later. I followed the recipe, cooked the potatoes, cooled the potatoes, wrapped them in aluminum foil, and refrigerated them. The day of the event I opened the aluminum foil, but left it ON the potato. I warmed them in a 400 degree oven for approximately 45 minutes. It worked! Though not as good as fresh from the oven, they were still great.

Great way to make them though! I am glad you give that a try!

Could I make these ahead of time to be served a day later?

I would only worry about the potato turning brown. If you do make sure you check out my tips on how to prevent them from browning! I hope you enjoy the recipe as much as we do!

Kevin Is Cooking
Reply to  Susan

Thank you Susan! I am so glad you found the tips helpful!

I love these potatoes

Thanks for the extra tips Kevin.
I’ve been making these for years (before they had a name), but your tips will surely help improve them.

Were you cooking potatoes before 1953?

Thank you so much! I have tried these potatoes many times, impossible to make them fan out or “separate”. Your hack of cutting off a slice serves 2 purposes: easier to cut the slices into the potatoes, and then opens them during the cooking process. Wow. Great hack. Thanks so much! I used a toothpick to fasten potatoes to the bottoms during cooking. Came out perfect. Will make again. Thanks!

Kevin Is Cooking
Reply to  sue

Thank you! I am so glad to find that this was a great help!

Great hack, I’ve been trying hasselback several times, cutting off the slice then sitting them on it (I used a toothpick to hold them together) is the key. A miracle. Thank you!

Kevin Is Cooking
Reply to  sue

Great thinking! I am so glad you enjoyed this! I love hasselback potatoes too!