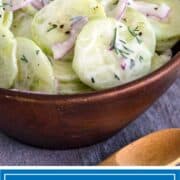 This classic, creamy Cucumber Salad is the perfect side dish for your next meal. Made using chilled, sliced cucumbers and onion all tossed in a tangy sauce with fresh dill. Light, healthy and refreshing!

This cucumber salad is so easy to make and is great for potlucks, BBQs and picnics. Just keep it cold along with your drinks and it’s the perfect side salad.

Summer grilling season is on and I love to mix up my salad game. This isn’t my grandma’s cucumber and onion salad recipe either. I’ve adjusted hers to this version using Greek yogurt in mine.

What kind of cucumber do I use in the salad?

Typically less flavorful and a bit more watery than the English variety, I remedied that by sweating the slices with some salt.

Are cucumbers a fruit?

Cucumbers are usually considered a vegetable because of how it’s used in the culinary world. However, as it grows from flowers and contains seeds, it’s botanically a fruit.

No one wants a soupy salad, right?

Super easy, right? Either slice the cucumber and onion thinly by hand or use a mandoline.

This is the best Cucumber Salad for bringing back those memories of summer, barbecues and family. I remember always eating this at lunches and dinners seated at picnic tables up at a summer resort with my grandparents and family. We would leave the City of San Francisco and head up to the Russian River Valley of Sonoma County, California, and vacationed at a town called Guerneville. Great memories!

The creamy dill sauce is fantastic, perfectly balanced with the sweetness from the sugar, tartness from the apple cider vinegar and tang from the Greek yogurt. As I’m not a big mayonnaise fan, it works fantastic.

I’ve also made this using rice wine vinegar and omitted the sugar, it works great. Enjoy!

Other salads to try: 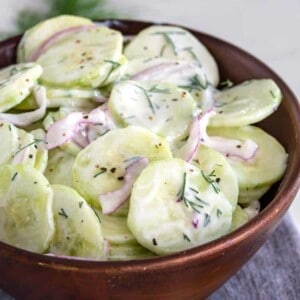 This cucumber salad is delicious. Unfortunately, my husband is allergic to cucumbers. We have learned to substitute zucchini. And it is very good with the zucchini as well. First recipe from your blog. Will not be my last. I appreciate your no-nonsense approach to putting out your recipes. Thanks so much. Now if I could have a grill in my place….Oh, and the no-bake cheesecake is to die for. Thanks so much.

So glad to read the adaption to zucchini was a hit! So glad you found me, so many great recipes to explore!

No one wants soupy salad, indeed! We’re going to a bbq this weekend and now I know what to take along – this yummy cucumber salad! This looks so fresh and tasty, Kevin 🙂

Excellent! Hope you guys have a wonderful BBQ!

One of my favorite summer salads. Love that you used Greek yogurt as the dressing base!

I have never been a big fan of mayo, so Greek yogurt is my go to Substitute. Thanks Marissa!