Kevin Is Cooking » Recipes » Kitchen Basics » What is Piloncillo 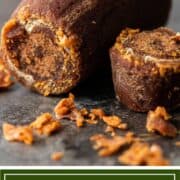 Piloncillo is used in Mexican baking and is often called Mexican brown sugar. If you’ve never used it before, you may be wondering what it is, what it tastes like, and how to incorporate it into your at-home recipes. Below, I answer these questions and more!

If you’ve been following along on the blog for a while, you know that I like knowing exactly what I put into my recipes. I also have a passion for Mexican cuisine, and naturally have come across a few ingredients I’ve never heard of before. I imagine that my readers feel the same, so I’ve made it my mission to do a deep dive into these lesser-known ingredients.

I’ve explained what hominy and Mexican oregano are, and now I want to take a moment to explore piloncillo. To put it simply, piloncillo is a Mexican sweetener. I’ll fill you in on what it is, the piloncillo vs brown sugar debate, and how to use it.

As mentioned, piloncillo is a type of Mexican sweetener. It’s a form of unprocessed cane sugar, and you’ll likely come across it if you want to whip up a traditional Mexican dessert. Because it’s unprocessed, it boasts a golden brown color. It’s made by boiling sugar cane juice until it becomes a sugary syrup. The syrup is then poured into cone-shaped molds to harden into a piloncillo cone.

It has a similar taste to molasses and is sometimes compared to brown sugar (more on that later). You may see it called panocha or panela. Piloncillo in English is, well, piloncillo. It technically translates to “pylon” which is a nod to its cone shape. It’s pronounced like this: pee-lon-SEE-yoh.

There are different varieties of piloncillo sugar, ranging from light (blanco) to dark (oscuro). As you might expect, dark piloncillo has a stronger flavor than its lighter counterpart. All types of this Mexican sweetener are earthy, rich, warm, and slightly sweet flavor.

Difference Between Piloncillo and Brown Sugar

Because piloncillo is often compared to brown sugar, you may be wondering about the difference between the two sweeteners. Piloncillo is sometimes even referred to as Mexican brown sugar so it’s easy to see why the two are confused!

The biggest difference is in how they are made. Again, piloncillo is made from pure cane sugar and is unprocessed. Brown sugar is made from refined white sugar and therefore can include some additives.

Piloncillo is typically much harder than brown sugar, and it has a much stronger taste. It’s usually described as boasting a more complex flavor profile as well.

Ways To Use Piloncillo

Use piloncillo for added sweetness or as an added spice in meat rubs. You’ll have to chop it up before you cook with it – remember that in cone form, it is really hard. You can use a sharp knife to do so, just watch your fingers! If needed, you can also soften piloncillo in the microwave first. Here are some ways to use this Mexican ingredient:

I’ve already given you a few recipe ideas above, but I wanted to include a few more for those of you who are eager to get into the kitchen! Below you’ll find a few of my own creations alongside some that I found on some of my favorite food blogs:

Where Can I Find Piloncillo?

You can find piloncillo in the specialty or international foods section of many grocery stores in the US. You could also check out a specialty Latin American or Mexican supermarket if you have one in your area. Worse comes to worst, you can always order it online! Remember, it’s sometimes referred to as panocha or panela, and it almost always comes in cone form.

What Can I Use As a Piloncillo Substitute?

If you don’t have any piloncillo on hand or can’t find any in the supermarket, you can use equal parts brown sugar as a substitute. If you want to crank up the rich and sweet flavor, add in a few teaspoons of molasses as well.

Is Piloncillo the Same as Jaggery?

Piloncillo is also sometimes compared to jaggery, but the two ingredients are quite different. In fact, the piloncillo vs jaggery question is almost as common as the brown sugar debate. Jaggery originated in India and is made from sugarcane and sometimes date palms. Both sweeteners have similar coloring, but jaggery tends to be a bit darker. Their tastes are different too: jaggery more closely resembles caramel.

Thanks for these ingredient tutorials. So interesting.

I’m so happy you find them useful! Thanks for letting me know.

Thanks for suggesting it’s not Jaggary. I was wondering about it. Being an Indian, we often used Gur or Jaggery that is made by boiling the sugarcane juice.

Thanks for following along Gyan!

Thanks for this post and the information… I can’t wait to try some of your recipes using this new (to me!) sweetener. A question, though… isn’t C&H Brown Sugar pure sugar cane? Other, lesser/ mass produced brands list molasses as an ingredient and I’ve heard it mentioned on various TV cooking shows that brown sugar is merely white sugar w/ the addition of molasses. But C&H has always listed only pure brown cane sugar as the sole ingredient.

I think it’s all in the marketing Karen and I am not sure exactly about C&H. I’ve read molasses is added to white sugar and I’ve also read white sugar comes from green sugar cane and brown from purple sugar cane. Maybe check their site to read more about that.