Kevin Is Cooking » Recipes » Kitchen Basics » What is Mexican Chocolate 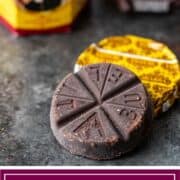 Mexican chocolate is a special blend of cacao nibs, sugar and cinnamon, resulting in a bold and complex flavor profile that’s incredibly unique! If you’re wondering what makes it so special, I’m sharing why.

I talk a lot about savory Mexican dishes here on the blog, and it’s not hard to see why. Who doesn’t love a good taco, enchilada, or carnitas? I know I do!

Today, I’m switching gears a bit to fill you in on Mexican chocolate. You may have seen it in your local supermarket in the specialty foods section, or you may have even tasted it in Mexican hot chocolate. Now, I know I said that I wanted to switch gears, but you can even use this tasty ingredient in savory Mexican dishes. But – I’m getting ahead of myself! Let’s start with the basics, then move on to recipes.

What Is Mexican Chocolate?

Cacao is native to Mexico, which makes sense as it thrives in hot and humid climates. Cacao nibs are ground down and then roasted to form the base of Mexican chocolate. On its own, cacao is quite bitter. With the addition of granulated sugar and spicy cinnamon, the ingredients balance each other out to form an intense and (in my opinion) delicious flavor.

Chocolate making in today’s Mexico can be traced back to 1900 BC. The traditions have stuck, and chocolate is still prepared today in the same way that the Aztecs of Mesoamerica once did. That is, it is still prepared this way in Mexico. European and American variations are made differently and therefore boast different flavors.

Difference Between Regular and Mexican Chocolate

Mexican chocolate has a different taste and texture than other types of chocolate. It’s also often used as a food instead of candy. Meaning, you’ll see it as an ingredient in several different types of recipes. You may have seen Mexican chocolate for mole, or for more traditional Mexican hot chocolate recipes. It’s not really meant to be eaten on its own as you would a Hershey’s chocolate bar!

You also won’t see dark, milk, or white chocolate varieties when it comes to Mexican chocolate bars. In fact, it doesn’t usually come in bar form. Rather, you’ll find it in small disk shapes, and the different varieties are marked with their sugar content. Today, unique varieties that include add-ons like nuts and other spices are becoming more and more popular.

Mexican chocolate is a lot less processed than its European or American counterparts, and its texture and taste reflect that. Many chefs describe this type of chocolate as “rustic,” and I couldn’t agree more!

Ways To Use Mexican Chocolate

Interested in even more recipes that use Mexican chocolate? You’re in luck! Here are some more of my favorite ideas, as well as some that I’ve pulled from a few other blogs I know and love:

What is Mexican Hot Chocolate Called?

All of this talk about Mexican chocolate may bring to mind spicy Mexican hot chocolate drinks that you may have enjoyed in the past! A thick hot chocolate is called Champurrado in Mexico. You’ll see my recipe linked above, but in case you missed it, you can find it here.

What is a Substitute for Mexican Chocolate?

While I always suggest that you go out and try to find authentic Mexican chocolate if a recipe calls for it, I know that sometimes just isn’t possible! If you’ve checked out your local supermarket and prefer not to order online, simply combine the following ingredients:

You can also add in almonds for added crunch.

Which Mexican Chocolate is the Best?

I’ve already shared on the blog that I like working with Ibarra Mexican chocolate best. It’s a brand that I know and trust and it’s made in Mexico. There are other popular options out there as well, such as Taza Mexican chocolate, and Nestlé brand has a Mexican chocolate variety, Abuelita as well. Feel free to use your preference!