Kevin Is Cooking » Recipes » Cuisines » Mexican » What is Cotija Cheese 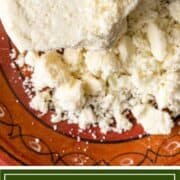 Mexican Cotija cheese is aged, dry, and crumbly. It’s the perfect cheesy addition to soups, salads, beans, and (of course) Mexican street corn — elote! Once you try it, you’ll want to have this sharp and salty queso on hand.

I’m constantly inspired by different types of cuisine. I love taking the time to learn more about the ingredients I’m using, especially when I use them often or if they come from another culture. That’s why I want to dedicate today’s blog to Cotija cheese!

This Mexican cheese appears in several of my recipes, and I always have a bit in my fridge. You can use it as a topping on almost anything. It doesn’t melt, so it’s best when grated as a final touch to your Mexican meals.

What is Cotija Cheese?

It’s an aged, crumbly, sharp, and salty cheese made from cow’s milk. If you’re wondering the correct Cotija cheese pronunciation, I’m here to help: co-ti-ha. It originated in a town of the same name in Michoacán, a state in central Mexico. At certain points in the aging process, it looks like feta, but once it has been aged fully it has a similar taste and texture to Parmesan. There is even a super-aged version called Cotija añejo.

It’s used in the same ways that Parmesan is: as a topping on salads, soups, and beans. It’s become so popular and widely accessible in the US in recent years that some folks even use it on pasta. You’ve likely seen it as the cheesy topping on elote, also known as street corn. It also happens to be one of my favorite Mexican cheeses, and I use it quite often!

Ways to Use Cotija Cheese

You can use Cotija cheese in a myriad of ways. It boasts a slightly nutty flavor — again, very similar to Parmesan. I’ve already mentioned that I like to use it as a topping. This is another cheese that will allow you to get creative. Here are a few more specific ideas and recipes:

As you can see, Cotija works best as a garnish or a topping. This is mostly due to the fact that it doesn’t melt. That said, it does work great in my carnitas enchiladas filling linked above!

All of this talk about Cotija and Parmesan may have you wondering about other substitutes for this crumbly and aged cheese! Cotija’s Italian counterpart is the first choice, but there are a few others to consider too.

You could also replace it with Romano, another dry and crumbly Italian cheese. It’s hard and salty, just like Cotija. It comes in almost the same form as well. Just be aware that Cotija cheese is slightly tangier. Ricotta Salata is another popular Italian cheese substitute. It’s firm, milky, and salty – and very comparable to Cotija. However, it doesn’t have the same tang or funk, just FYI!

Queso Fresco and Cotija cheese are also interchangeable. The former is another kind of popular Mexican cheese. It’s also crumbly, but a lot fresher than Cotija – which makes sense as “fresco” is Spanish for fresh. Since Queso Fresco is more similar to feta, it also works really well for a topping! You could alternatively opt for feta as a substitute too.

There is no shortage of recipes that call for this Mexican cheese – trust me! I’ve linked several above but I wanted to share a few more favorites here. I’ve also included some that I recently found online and can’t wait to try out on my own:

Cotija cheese is a white cheese that’s crumbly and dry. It boasts a salty and tangy flavor. Depending on how long it’s been aged, the texture and taste will vary slightly. A young Cotija is similar to feta in that it’s easily crumbled yet sharp in taste. An aged Cotija is closer to Parmesan in both texture and taste.

Where to Buy Cotija Cheese?

Mexican cuisine has become very popular in the US, so Cotija cheese isn’t that difficult to locate. Head to the specialty cheese section at your local supermarket first. I pick mine up at Winco, Fred Meyer and Safeway. If you can’t find it, don’t give up just yet. If there’s a Mexican or Latin American specialty store near you, they’re bound to have it! It’s usually sold in blocks that you can grate yourself or pre-crumbled options.

Can You Grate Cotija Cheese?

Absolutely! As mentioned above, if you buy your queso in block form you’ll have to grate it yourself. Cotija is too crumbly to be eaten in slices, but it grates up wonderfully. Remember that this cheese won’t melt so it’s a great garnish for soups, salads, and beans. I also enjoy sprinkling mine over guacamole or salsa to switch things up a bit!

always enjoy your the effort you put into this site. Recipes are easy. Just one question….where do you find the wonderful clay dishes you use for presentation?

Thanks so much Sel. I constantly pick things up on my travels and occasionally online. A favorite is Etsy.