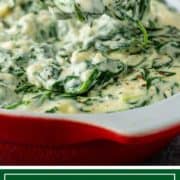 Steakhouse creamed spinach has loads of flavor from a rich cream sauce. Make this recipe for a  hearty side dish for beef, chicken, or pork!

It’s actually very simple to make your favorite restaurant dishes at home, and this creamed spinach recipe is a perfect example.

All you need to do is make a bechamel sauce, add a bit of cheese, and stir in the cooked greens. Plus, it’s easy to double the amount to feed a crowd or just have extra for leftovers.

Serve this decadent side with other steakhouse favorites like baked potatoes, macaroni and cheese, and warm honey wheat rolls.

What’s in the steakhouse creamed spinach?

Blanched and wilted spinach leaves added to a flavorful sauce made with onions, garlic, cream, and cheese.

The secret ingredient is nutmeg, which adds extra warmth and enhances the nuttiness of the Parmesan.

How to make creamed spinach

If you’ll be using thawed frozen spinach, you can skip the blanching step and proceed with the rest of the recipe. Be sure to still squeeze out any excess liquid so it doesn’t make the sauce too watery. 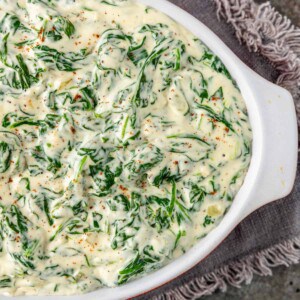 Hi, I'm Kevin! Whether in the kitchen or on the grill, you’ll find me cooking Easy American Recipes with a love for Mexican and Tex Mex. I’m passionate about making tasty food because life’s too short to be bland! Read More…