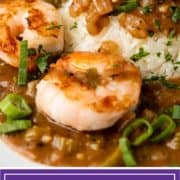 Shrimp etouffee is a classic Cajun dish of tender shrimp and rice smothered in rich gravy. Make this recipe for a taste of authentic Louisiana cooking at home!

For lovers of Cajun and Creole cuisine, a plate of etouffee is never too far from the mind. It’s a classic Louisiana favorite, right next to other authentic dishes like jambalaya, boudin balls with Cajun remoulade, dirty rice, and New Orleans shrimp and grits.

Although the ingredient list to make a shrimp etouffee recipe is relatively basic, the flavor of the dish is deep and refined. Making the dark roux that thickens the gravy is a labor of love and the extra time spent to make it is well worth the wait.

This is the type of dish that begs to be served with a crusty loaf of French bread or batch of homemade cornbread muffins for sopping up any sauce left on the plate. Those who love it know that you wouldn’t dare leave a drop of the deliciousness behind.

Aside from the fact that both of these southern dishes include shrimp and rice, etouffee and creole have little else in common.

Shrimp creole is, as the name implies, a dish of Creole cuisine. It includes a tomato-based sauce with bell peppers, onions, and celery. The flavor of shrimp creole is sweeter than shrimp etouffee, and the consistency of the sauce is much thinner as well.

Shrimp etouffee is a Cajun dish, so there are absolutely no tomatoes in it whatsoever. The French word etouffee literally means “smothered” which is exactly how the shrimp is served.

Rather than a coating of thin tomato sauce, the shrimp is covered with a rich, thick, dark and spicy gravy. Etouffee is a hearty meal that will stick to your ribs in the best possible way!

The Art of Making a Dark Roux for Etouffee

If you’re new to making sauces and gravies, you may not be familiar with the French word, roux (pronounced roo, as in kangaroo).

Roux is a mixture of equal parts fat and flour, and it’s used for thickening liquids, primarily in soup, sauces, and stews. There are several colors of roux, ranging from the lightest white to blond, tan, dark brown, and black. The longer the fat and flour cook together, the darker the color of the roux becomes, and the less thickening power the roux has.

The theory and technique for how to make a roux are simple; the trick is learning how to make dark roux without burning it. The trick lies in controlling the temperature of the pan.

For this shrimp etouffee recipe, you need a brown (dark) roux, which takes approximately 10 minutes to cook.

To see the process of making this recipe from start to finish, watch the video in the recipe card at the bottom of this post!

Tips for Making the Roux

Traditionally, this Cajun dish is made with Louisiana crawfish. Because not everyone has access to fresh crawfish, the recipe has been adapted over the years. Nowadays, you can find shrimp etouffee pretty regularly in almost any New Orleans restaurant, as well as versions made with andouille sausage and even chicken.

Feel free to use whatever protein you enjoy and have access to. You can even use frozen shrimp; just be sure to allow it to thaw first, and use paper toweling to pat it dry before you start cooking with it. Otherwise, you won’t be able to form a nice sear on the shrimp.

This meal is best served over a bed of white or brown rice. Serving it over southern red beans and rice is another tasty option.
It’s great with cornbread muffins (I actually prefer my recipe for spicy Mexican cornbread), and either a crisp garden salad or some pan fried okra and/or southern style collard greens. 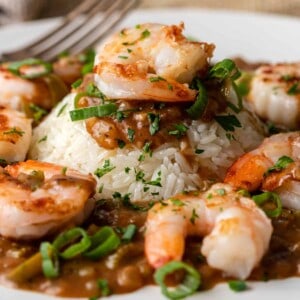 what would be your take on putting the dutch oven in the oven to cook the roux? Standing at stove for any time is impossible …. so I wondered if you had a call on this.

I have not made it that way. My thoughts are by the time the oven heats up your roux can be done on the stovetop. But if standing is an issue I have read that cooking it in the oven can be done at 350°F for 90 minutes (dark roux). Hope this helps!

Kevin this was a wonderful flavor, we loved it, however when I printed the recipe for 2 servings the formula wasn’t right. It called for 1/4 cup oil & flour and only 4ounces of clam juice. Mine immediately turned to mud so I added the other 4 ounces of clam juice. Turned off the fire and mixed it in. It was still too thick like sludge but we ate it anyway mixed our rice with it. Next time I make this I will only use 1tbsp of flour and oil for the roux. Then maybe it will be more like… Read more »

Valerie, so glad you enjoyed this one! Question: did you cook the roux the 15 minutes as directed? The longer the fat and flour cook together, the darker the color of the roux becomes, and the less thickening power the roux has. Let me know, as it should be good even if you cut the recipe in half.

Kevin I cooked the roux at least 15 minutes maybe more and mine turned out peanut butter color. So I added the vegetables and kept cooking and turning. The roux darkened a bit more not much. We did think the flavor was awesome and will do this again, my total time was 1hr. 52 mins. Thank you for replying!

This was amazing, the flavor was incredible, it is a must try.

One of my favorites, thanks Dave!

2 Questions more than comments. Why cook the shrimp separately? And is 15 minutes enough time for the roux and everything to “stew”/simmer?

Kraig, I’ve found this one full proof and packed with flavor. The initial cooking of the roux can go longer if you prefer. I cook the shrimp separate so they are not overcooked. I hope you give this one a try, let me know!