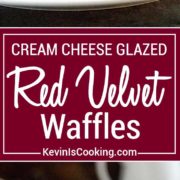 Red Velvet Waffles with Cream Cheese Glaze is a delicious Valentine’s Day or Mother’s Day breakfast treat. Make this easy recipe from scratch in only 30 minutes!

What exactly IS red velvet?

Today I’m sharing with you a little Valentines Day inspiration idea. While there are countless stories on the origin of the idea for Red Velvet, whether in cake, cookie, crepe, pie or donut form, or like here in my Red Velvet Waffles with Cream Cheese Glaze, all can agree the flavor is chocolate and the color is red.

In researching and taste testing various recipes I found while many assume it started in the South, it’s claim to fame seems to originate in New York.

According to famed New York City hotel the Waldorf Astoria’s website they claim “Red velvet cake was born in the 1940s. Believed by some to have been a Southern creation due to its popularity in the Deep South, the classic recipe actually originated here at the Waldorf Astoria.

“The chef who developed the recipe kept it a secret until a guest wrote to him asking how to make it. Allegedly, the chef provided the recipe to the guest, but also included a bill for $350 — quite a lot of money for the time.

“The guest became so offended by the unexpected invoice that she took revenge on the chef by sending the ‘secret’ recipe to all of her friends and family members, many of whom were the ‘Who’s Who’ of the Big Apple. Luckily, the incident only helped the cake to grow in popularity, and it eventually became one of the most sought-after bakery treats.”

Now I read that one before for a cookie from Neiman Marcus, so who knows really. BUT whatever the deal, the red chocolate is a perfect one for Valentines Day.

So how about surprising your Valentine, or yourself, with these tender, chocolate flavored Red Velvet Waffles with Cream Cheese Glaze?

They are soft, chocolate infused and the cream cheese glaze and chopped pecans on top make for one special breakfast, or dessert treat. Enjoy!

For waffle lovers, I’ve got a few others for you to try like my Blueberry Poundcake Waffles, Date Honey Bran Waffles or this savory dinner BBQ Beef with Jalapeño Cornmeal Waffle! 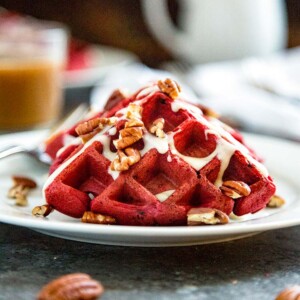 1. Red beet powder can be substituted for the red food coloring if that is a health issue for you.

Great recipe! My daughter found this recipe and asked me to help her make it…of course it was a great teaching opportunity..explaining why use room temp butter and cream cheese (and eggs and buttermilk)…and why you always add dry ingredients to the wet…The end result of the batter was good, it just wasn’t sweet enough for my taste. I also thought it needed a little more of the chocolate flavor. I use Ghirardelli Cocoa. Please know, I live in as South Mississippi that you can get before you are in Louisiana. We are not the healthiest state in our country.… Read more »

Awesome, so glad you enjoyed this and adapted to your tastes Jennifer. Cheers!

this recipe is super amazing my family loved it

Kevin Is Cooking
Reply to  ebony

I am so glad the family loved it!

Glad you gave these a try Alexandra.

These were so good. I have always been underwhelmed by red velvet cakes in the past. My husband said red velvet cake just tastes like plain cake with red food coloring. yet I remember someone telling me how amazing red velvet cake was even though they couldn’t describe why. So I was really intrigued by this in waffle form hoping to find that elusive indescribable flavor. It has a beautiful tanginess with a hint of cocoa. Just lovely!

Thank you! I am glad you made this recipe and enjoyed it!

when you said let the butter cool, did you mean let it coagulate? and do I use salted or unsalted butter?

After melting the butter let it cool for a minute, that all. I typically use salted butter, but that is up to you.

I love red velvet cake and I can’t wait to try this.

Kevin Is Cooking
Reply to  Dedra

I hope you enjoy them! They are delicious!

can i use white vinegar instead of apple cider vinegar

Definitely, should be good on that substitution.

Can we use whole wheat flour?

I use white flour but give the wheat flour a try and let me know how it turns out!

This looks great! I’m definitely going to try this for our weekend breakfast. Couple of questions though– would it be alright to add chocolate/white chocolate chips to the batter here? And I know someone a while back asked this, but I wasn’t sure if since then you’ve tried it, but do you know if this batter can be prepared the night before and refrigerated? Thanks so much!

Hi Caitlin! I have to answer that I have done neither. I love to the chip addition idea myself. As for the batter made the night before, my first thought would be that the activation of the baking powder and vinegar would expand and collapse, leaving a waffle not as airy and fluffy as it could be if just made at the time of cooking the waffles. If you do either, please let me know the results!

I actually did end up trying the chocolate chip idea– tasted amazing! As for preparing the batter the night before, I did not end up doing that, for the reasons you mentioned about the activation of the baking powder, etc. Instead, I pre-measured and combined all of the dry ingredients ahead of time, and then combined the vanilla and vinegar in a separate smaller container (measuring for some reason takes the longest time for me, so this did help save a lot of time!). When everything was all mixed together the next morning, the waffles tasted great!

Wonderful, thanks for taking the time to come back and let me know Caitlin!

Thanks, Kevin for sharing this recipe. I have tried this so many times and trust me, every time I make it, my family love it. I am have made it with Harsha’s Red Velvet Waffle premix.

This is always a hit, thanks Nitin!

Excellent recipe. I added a little more cocoa and they came out perfectly. Instead of cream cheese, I made maple butter and it was great, no need for syrup. Thanks for the recipe.

I made this recipe for family Sunday brunch. Unfortunately, the waffles were very eggy. I’m not sure what went wrong but I had to resort to box waffle mix. I may try it again using 1 egg only. Any recommendations? The icing was a hit and everyone said the icing is what made the waffles so good.

Not quite sure what went wrong Trina, eggy is a comment I have yet to read here on this one. I make these often for a dessert and breakfast on occasion and they turn our crisp and are a beautifully light and tender waffle.

Made these for valentines day this morning. The waffles were good 9/10 wish they came out with more crunch but yummy. (I write as I stand here shoving one in my face) The icing however, was a mess. When I tried to whisk it all together I ended up with little chunks of suspended cheese in a milk and sugar sauce. It looked, and tasted gross. Served with maple syrup instead.

Thanks so much for trying this one out Madison, but sorry you had that experience with the icing. Did you make sure to have the cream cheese and butter at room temp? Did you make it in this order as listed? Whip the cream cheese and butter together in a large bowl with a hand mixer until smooth. Carefully beat in the confectioners’ sugar, then add the vanilla and milk. Beat until the glaze is smooth.

I followed the recipe as is but my normal recipe separates the eggs. I beat the whites and fold them in which I think helps the crunch factor. Just a thought.