Philly cheesesteak stuffed peppers have all the classic flavors without the bread. This recipe fills a fresh bell pepper with cheese and steak. 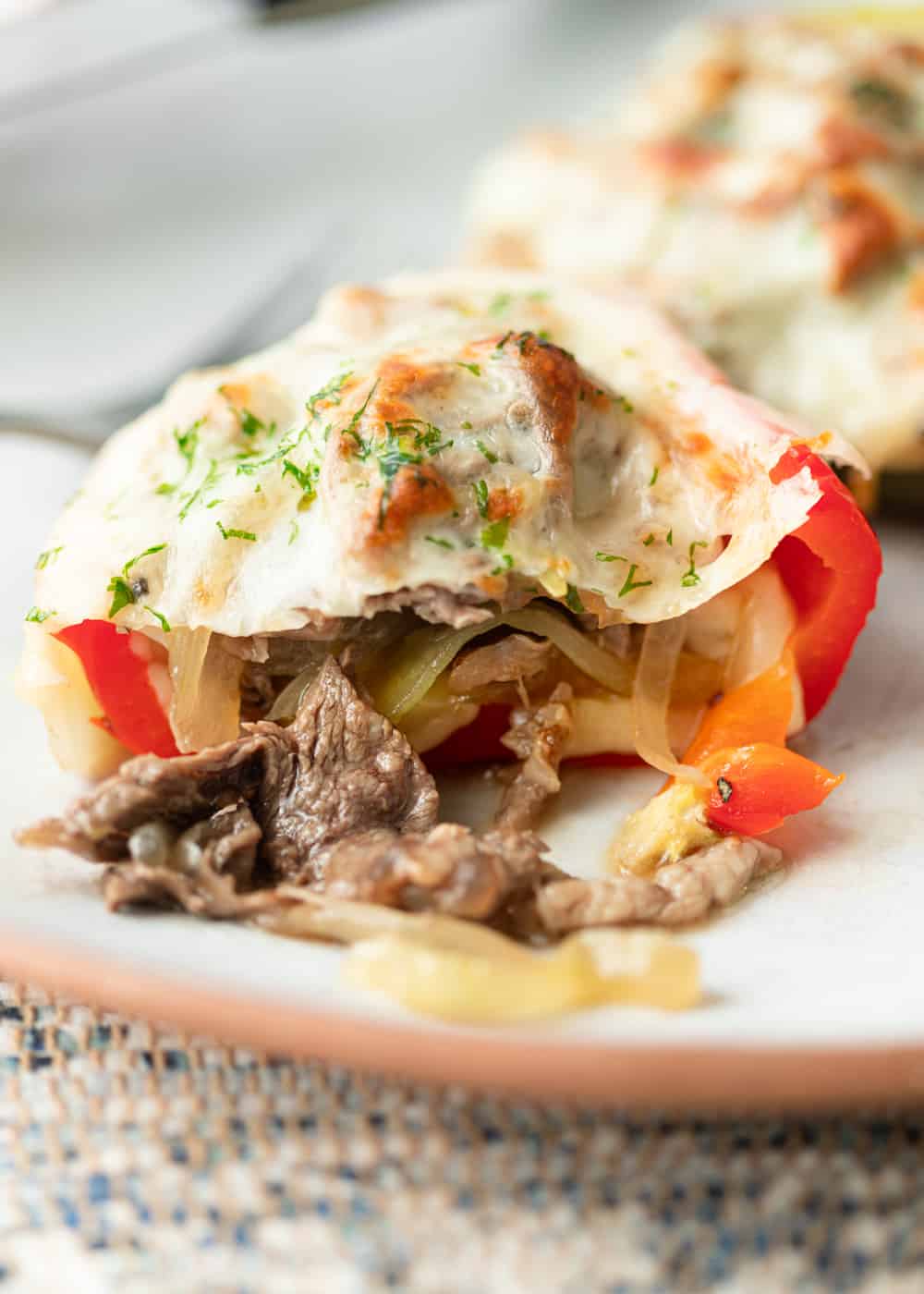 You don’t have to travel to get the authentic flavors of Philadelphia. This Philly cheesesteak stuffed pepper recipe removes the bun and replaces it with a roasted bell pepper. Keep it simple or spice it up with extra ingredients.

How to make stuffed bell peppers

Instead of keeping the peppers whole, we are going to make them into a casserole meal. No need to carefully scrape hard to reach spots or try to keep the peppers from falling over. 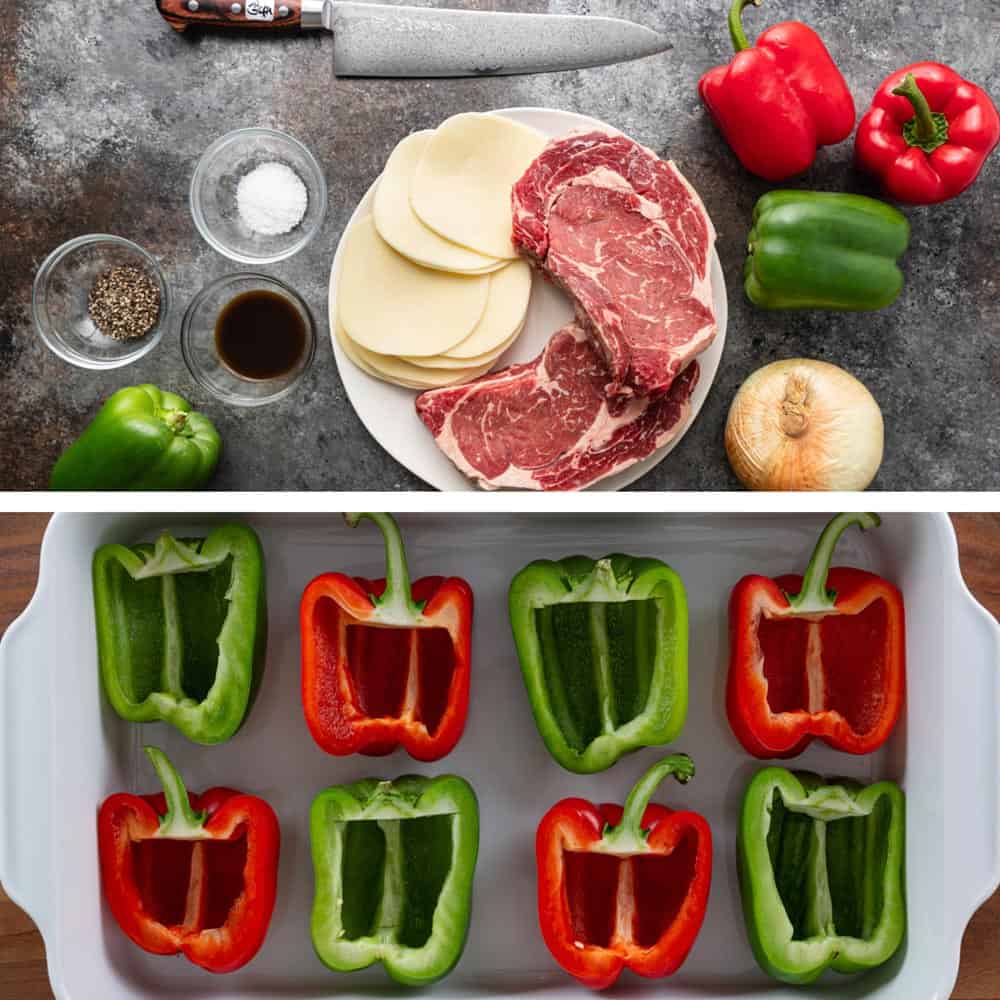 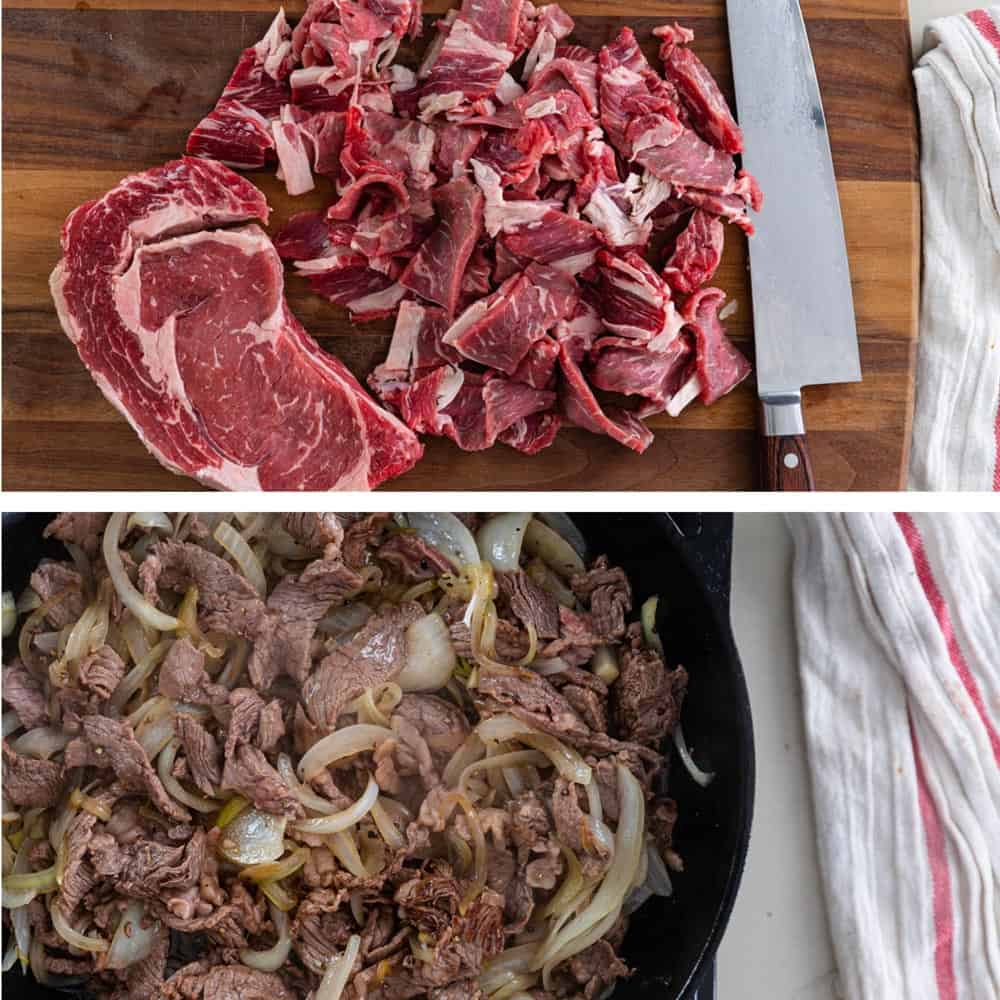 What is in Philly cheesesteak stuffed peppers?

A traditional Philly cheesesteak is made with very thinly cut ribeye steak. This is cut from the rib section and has lots of marbling. Because of that, it is very tender and juicy. A ribeye is a boneless cut, making it very easy to slice.

I like to use a ribeye in this recipe as well, continuing the tradition. A sirloin tip is a good substitute. It is also boneless, and is lower in fat than a ribeye.

Other ingredients in the stuffing include:

After the peppers cook, layer them with cheese, steak and onions and another layer of cheese. 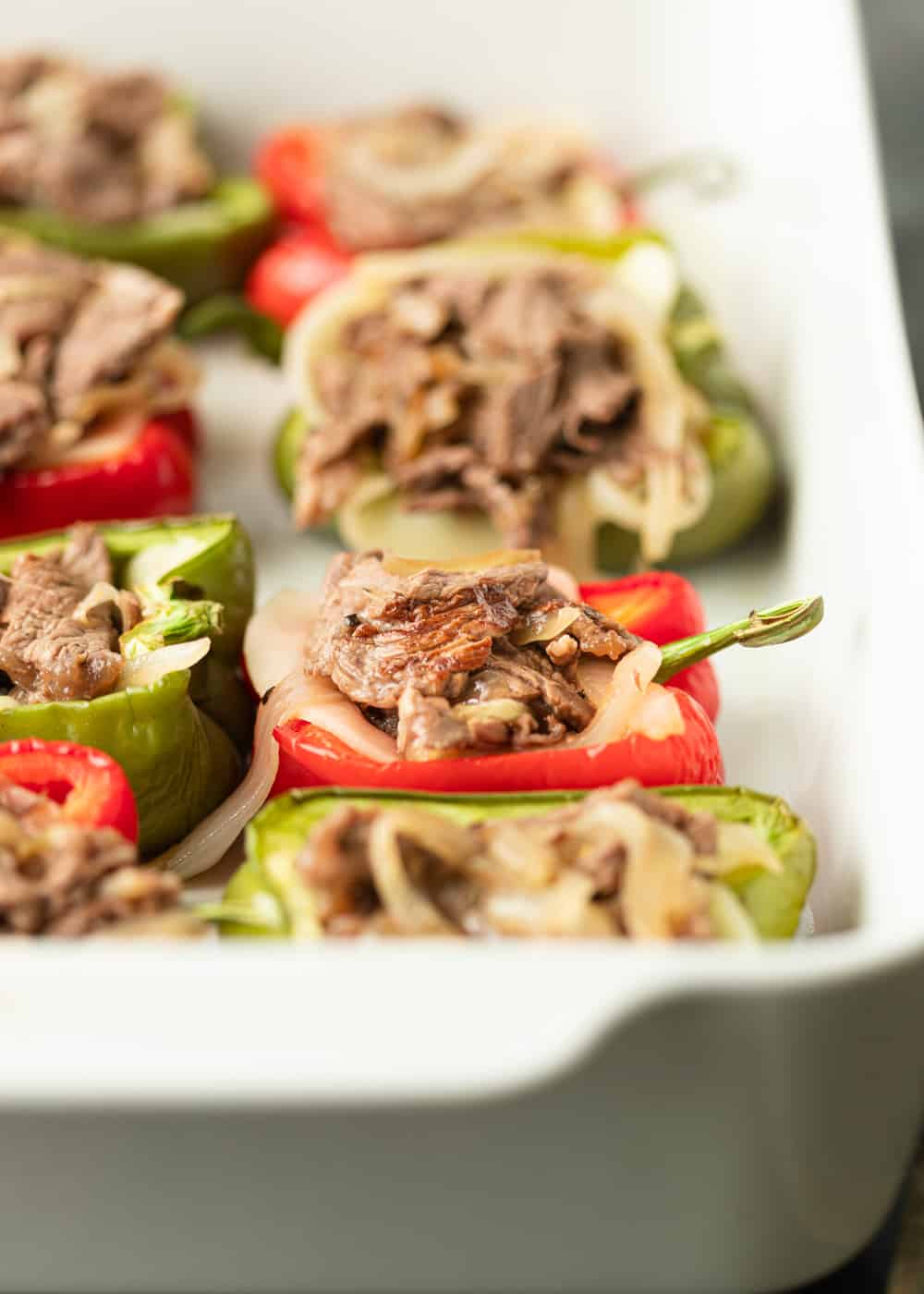 How do you thinly slice meat?

You want to have very thin slices for this stuffed peppers recipe. Here are a few tricks to help you achieve the right cut. 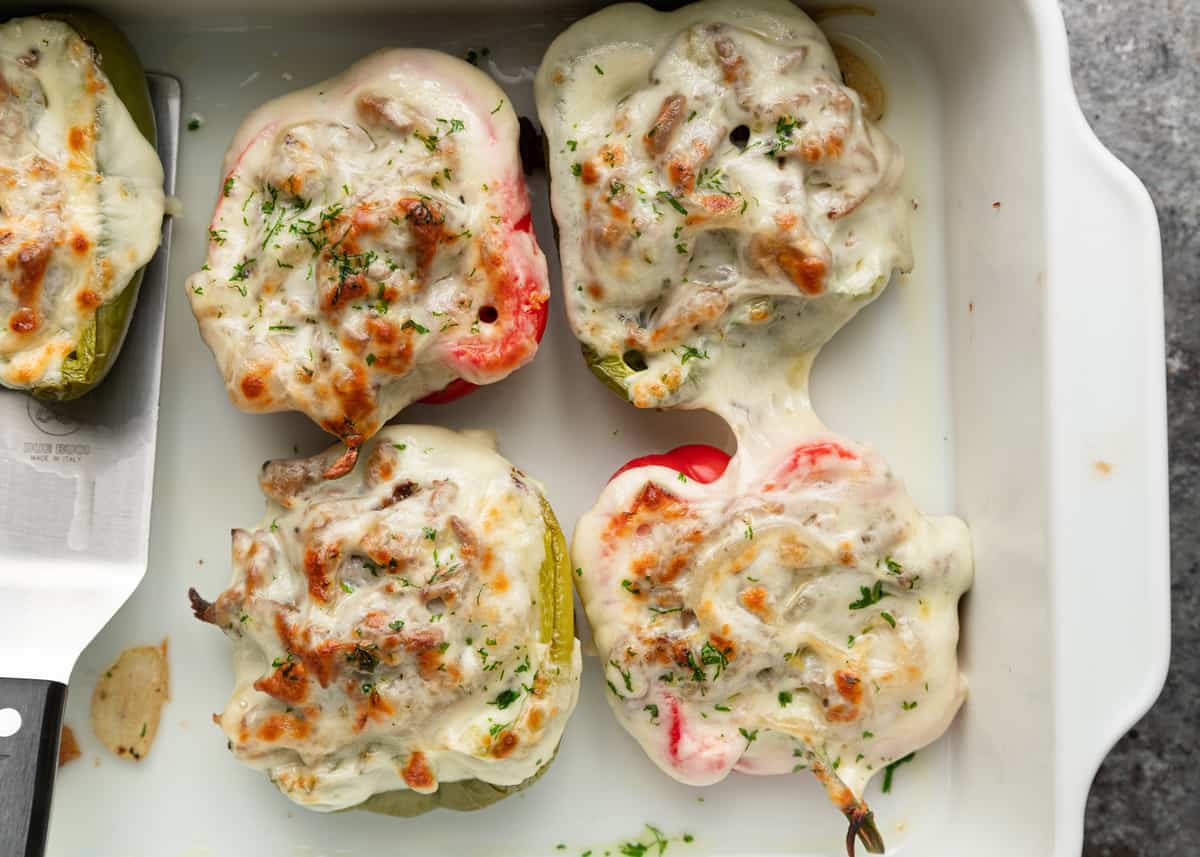 This recipe is the basic Philly cheesesteak without the bread. Other ingredients you can add to your stuffed peppers recipe are: 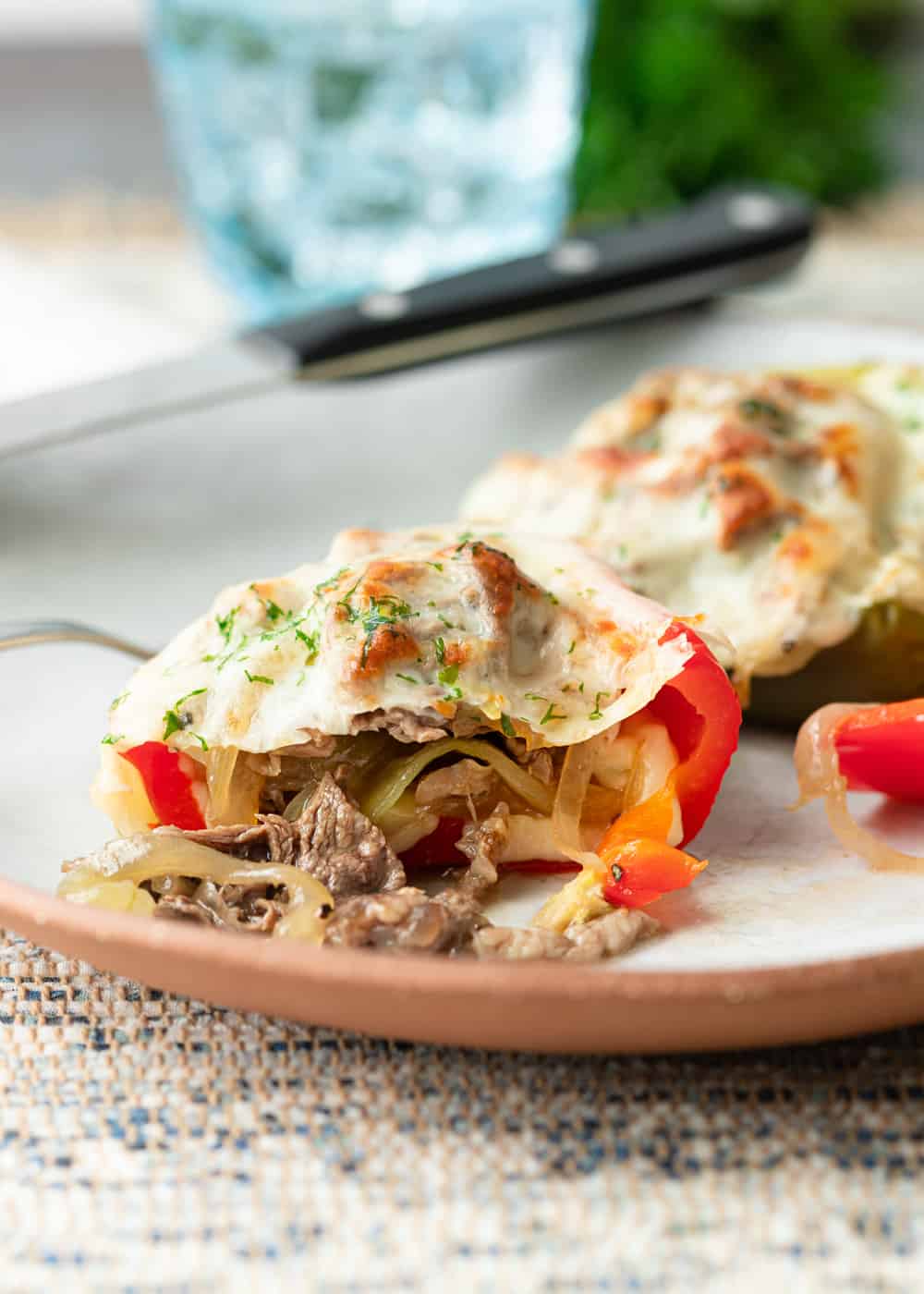 Watch how to make this below! 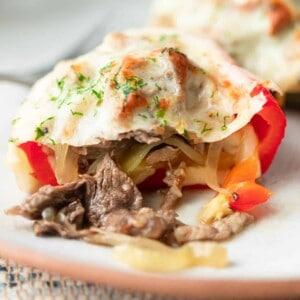 Philly cheesesteak stuffed peppers have all the classic flavors without the bread. This recipe fills a fresh bell pepper with cheese and steak.

Pretty damn good. Not quite a Philly, but way healthier and very yummy.

I enjoy the healthy twist! I am glad you enjoyed it! Thank you for sharing!

How did they turn out Bobette? I hope you enjoyed them!