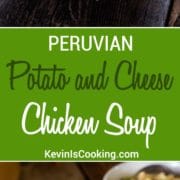 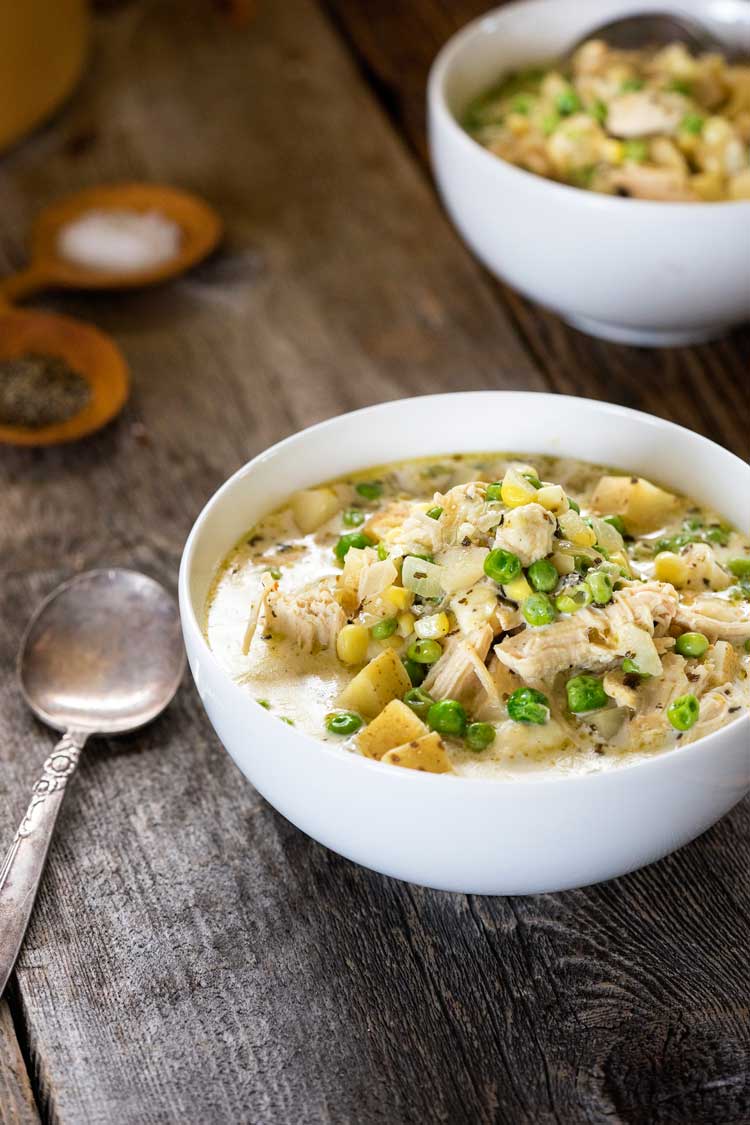 This Peruvian Potato Cheese Soup with Chicken hails from the South American area of Peru along the Andes. It’s the kind of soup that warms the soul and puts a smile on your face.

Known as Locro de Papa, it’s hearty, filling and is loaded with fresh corn, potatoes and melting cheese that elevates this easy-to-make soup into something you’d think took a long time to make, but doesn’t. No one needs know but us.

So I have a confession to make. I had a good friend stay with us as a house guest last week, and truth be told, it was such a fun time, but I completely forgot what I was going to make for her at our first dinner. My mind raced on what to make and impress her with as she would be at my house in 3 hours! I mean she is another food blogger. I needed to step it up a bit.

I thought about it and remembered how much Dave enjoyed this easy to make Peruvian Potato Cheese Soup with Chicken last week and thought I’d get her take on it, so I set out to make it again. I also needed something else to round out the meal. I mean as good as this soup is I felt we needed something else. So I busted out my rolling pin and made my Empanadas Mendocinas. Fresh and homemade with love.

This was turning into a South American feast and they went over well I’m happy to say! 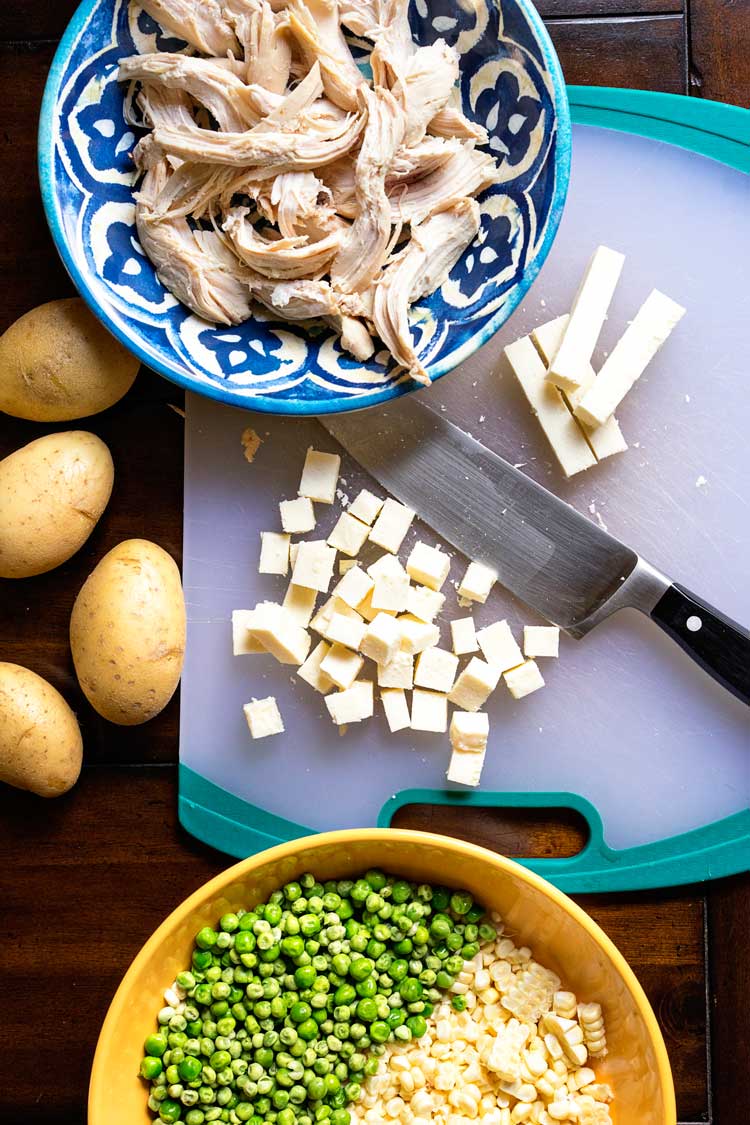 Needless to say, my house guest was none other than Nagi from RecipeTin Eats. We had so much fun hanging out, talking about food and our dogs and she is just as genuine and fun as she comes across on her site. A friend and fellow food blogger for two years now it was great to hang out and visit.

This soup is one that is light, as in it has a wonderfully flavored chicken broth enhanced with sautéed onion, garlic, fresh corn and milk. No roux thickened soup this time. The herb that makes this is Mexican oregano, but regular oregano works just as well. Frozen corn and peas can be substituted here as well if fresh is unavailable where you’re at. 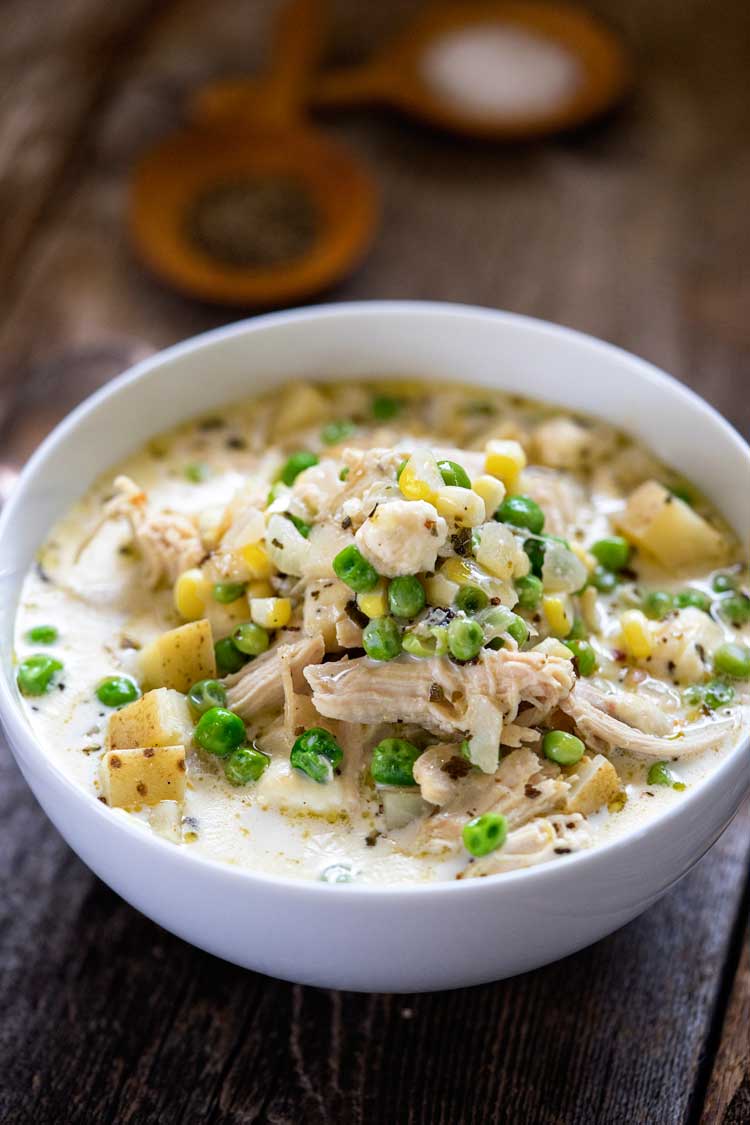 I like to add shredded rotisserie chicken to this to make it a little more substantial, but you don’t have to add it if you don’t want. I have even made this with shredded slow roasted pork. Heavenly as well.

With all the cubed potatoes soaking in that aromatic broth, the Cotija cheese cubes added towards the end of cooking melting, and the added milk in the broth coming from the freshly cut corn, this soup is a winner. Cotija cheese is a hard cow’s milk cheese that originated from Mexico and is like feta cheese’s younger brother in flavor.

Who could resist melting cheese in a milky, herb infused broth? Plus it’s cooked and on the table in 30 minutes!

Not for the night that we ate this soup, but the following evening Nagi made her Easy Chocolate Fudge Cake for dessert. Go check it out, it was superb. Chocolate Nirvana!

Enjoy this Potato Cheese Soup and Happy Monday everyone! 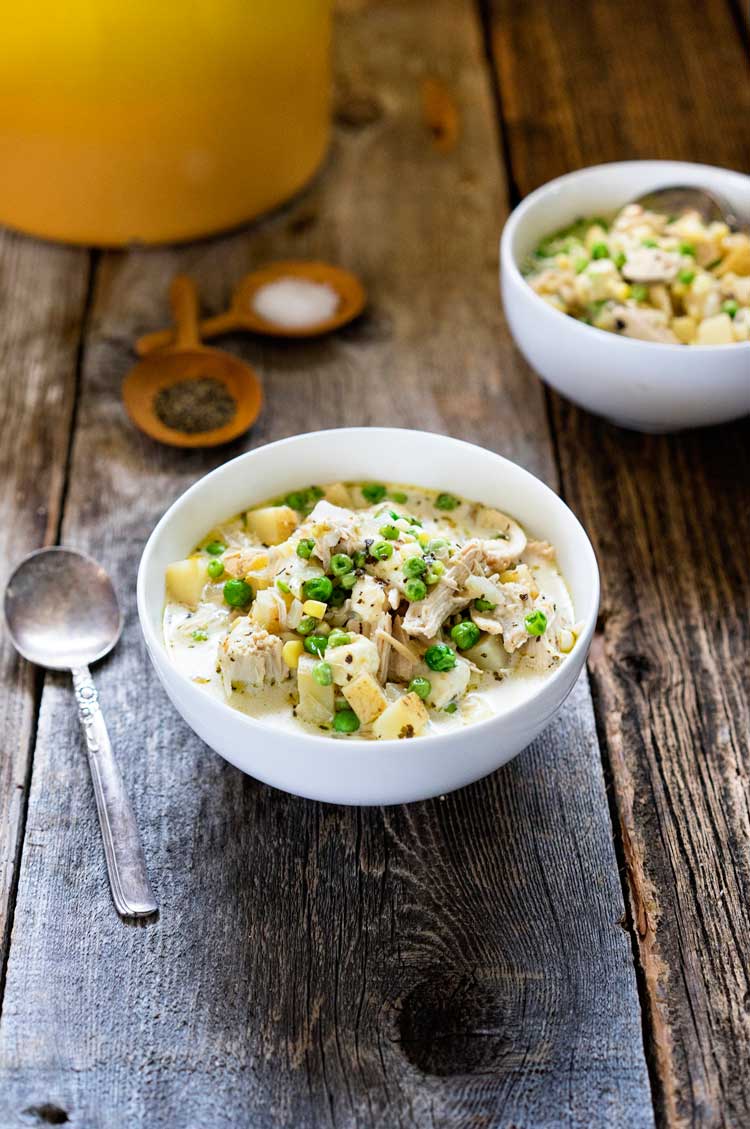 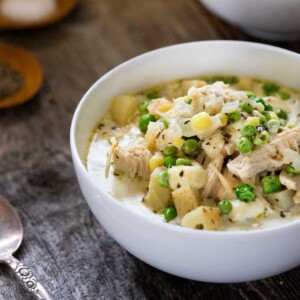 Recipe adapted from The Kitchn.

Hi Kevin,
Although this looks like a lovely recipe, it’s not from Peru but Ecuador! I said the same thing when I saw a similar recipe posted in The Splendid Table. There seems to be a confusion around the name, so I wrote to them and posted the corresponding links. Here is the link to the post and you can read my comments about “Locro”. Regards, Susy 🙂

Thanks so much for the input Susy. I’ve read from several places too both countries claim it. Whomever this is originally from, it sure is a winner!

Can you recommend a good main dish recipe from Jerusalem? I’m having a dinner theme party .

This Hummus Kawarma is great for parties. Other than that I would suggest any brisket recipe here on the site or the Jerusalem cookbook by Yotam Ottoleghi is amazing.

I wish I could put corn into soup as much as I like, but unfortunately Dean hates it. I also wish we could get queso fresco here in Sydney. Nobody sells it!

Unfortunate Dean dislikes corn in soup! I love the pop and flavor. Funny I hear the lack of Mexican cuisine or at least products in Sydney quite often. Wonder why that is… We should set up a export/import business. 🙂

Okay, I’m green with envy about hanging out with you and David and Nagi – wonderful people on this little blue planet. 🙂 This soup looks fantastic…well done, my friend!

Awe, thanks Marissa. It was such a fun visit and we were such food nerds – loved it! We even called Dorothy one evening, it was great to hear her and Gary finally. Did she send you a pic of them? Too cute. Let me know and I can send you one of them. Great to put a face to the name finally.

Brian @ A Thought For Food

Uhhhh… cheese soup? Yes please! How do we think this would do with shrimp or salmon? Or, heck, just without the chicken? I wouldn’t mind digging into a big bowl of cheese, potatoes, corn and peas. 🙂

Author
Kevin (@kevin-2)
Reply to  Brian @ A Thought For Food

I bet this with shrimp would be fantastic Brian, nice idea there! This soup is traditionally served without the chicken, I added that for Dave. Cheers to a fun weekend on the Cape!

Who does not love comfort food and this looks like comfort food heaven served in a big bowl. Nagi must have absolutely loved it. Sometimes the best things come out of improvising – well done 🙂

Thanks Miriam, really appreciate it. We had a great time and the visit was too short.

Now this is my kind of comfort food, Kevin! All of the flavors in this soup…and then followed up the next night with Nagi’s chocolate cake…yeah, I would have been in comfort food heaven. I hope you guys had a blast! Oh, and if there’s any soup left, I’ll be happy to help you out with it. Pinning this one for later! #WolfpackComfort

Indeed Dave and yes, we did have a great time. We even talked about a group of us (ahem, you included) who are followed by Dorothy and possibly having a group food bloggers meet up in Nashville and then visit Dorothy and Gary later this year or next. Let me know if that interests you.

Missed a lot happening here, Kevin! But I do catch up on your Insta. 😛 The moment I saw Peruvian in my reader app.. I clicked to read more as I had fallen in love with the Peruvian cuisine that we were served during our stay in Dubai by Tesoro! Their Goulash was out of the world… and I am sure they must have served some soup but I ain’t a soup person! 😐 and never tried it! But now that Ramadan is around, I think soups will make a great start… Loved reading this post that expressed so well… Read more »

Hello there Famidha! Thanks so much for the kind words. I want to go to Dubai one day. A friend went last year and invited us, but we had just returned from Turkey so that didn’t happen. One day!
Soups are great and can be light or filling, it’s all what you put in them, right? Cotija (Mexican) cheese is a moister, fattier, and less salty version of Feta (Greek) and Parmesan (Italian) that holds its shape when cut, with a slightly similar flavor. They can be substituted if you can find them.

I could really go for a bowl of this soup.
I love corn in soups. And who doesn’t love chicken and melty cheese?

What I love about using fresh corn is the milk seeps out into the broth and sweetens it, too. The melty cheese is the kicker though. Have a great day Jeff.

Y’all sure had a feast at your place, Kevin! This soup is just so creamy and comforting – following it with Nagi’s chocolate cake makes for one EPICALLY EPIC meal!
BTW – I didn’t know about Cotija cheese till I dropped by today so thanks for introducing me to it! Happy Monday!

Thanks Shashi! Several people have mentioned it so I will ad a note to the recipe too. We had a great visit, always too short.
Cotija (Mexican) cheese is a moister, fattier, and less salty version of Feta (Greek) and Parmesan (Italian) that holds its shape when cut, with a slightly similar flavor.

Hey Kevin! What a bowl of comfort! There is nothing better than a big pot of homemade soup, any time of the year! Nagi said you guys had some great food (no surprise there)! A nice piece of crusty bread and I’m happy!

I agree Dorothy, we had so much fun and this soup was a nice comforting welcome meal. Great chatting with you, too. 🙂

That looks like a big bowl of YUM right there, Kevin! I guess you were so excited to have your friend visit that you totally forgot about the food. It’s happened to all of us, I think. And, I always say there’s pizza delivery if you’re absolutely stuck, right? So great that you were able to whip this up so quickly. Who would have thought by the look of it. I’ve never had cotija cheese before, but I’m sure I’d love it ’cause I haven’t met a cheese that I haven’t loved yet. How lucky your friend was to have… Read more »

I was so excited and so many things to do the most important was the last I thought of, but turned out just fine. Best under pressure! LOL
Cotija (Mexican) cheese is a moister, fattier, and less salty version of Feta (Greek) and Parmesan (Italian) that holds its shape when cut, with a slightly similar flavor. They can be substituted though. Happy Monday and thanks Dawn!

It was SO MUCH FUN Kevin! Thank you so much for welcoming me into your home and your life!! You spoilt me to death – especially with the food. This soup was AMAZING! I can’t talk it up enough!!! But you know that the highlight of the whole trip for me were your empanadas….including all the food we ate out too!! I can’t wait to come back and stay for a bit longer 🙂 Lots more exploring of SD to do!!! PS Dozer says WOOF to Cody and Ollie! N x PPS Five stars for SURE. This soup was seriously… Read more »

Thank you Nagi, you’re very special to me. 😉
I just looked at the photos from the empanada recipe from 2+ years ago and am thinking they need a little TLC. Ha! Lard is key and that achiote oil helps with the color.
You’re welcome anytime and for as long as you like, too. Double WOOF from Kodi and Ollie! xoxo

Hi, I'm Kevin! Whether in the kitchen or on the grill, you’ll find me cooking Classic American Recipes with a love for Mexican and Tex Mex. I’m passionate about making tasty food because life’s too short to be bland! Read More…