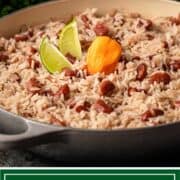 Make Jamaican rice and peas for dinner tonight! This recipe features pigeon peas or kidney beans and rice cooked in rich, creamy coconut milk with Caribbean spices and a kick of heat from Scotch Bonnet peppers.

This flavorful dish is a staple of Jamaican cuisine, where they often serve it as a meatless main meal as well as a side dish. Beans and rice is a hearty dish, and because the beans provide essential nutrients and are full of dietary fiber, it’s a healthy dish too.

Thanks to the fiber, the dish is definitely filling enough to serve on its own. But as a side dish, it’s fantastic with Caribbean dinner recipes like Jamaican jerk ribs or jerk chicken, grilled pineapple salmon, and mango bbq chicken.

There’s a wonderful essence to the coconut rice and slightly spicy heat in the background from the scotch bonnet peppers. All in all, it’s a delicious, easy to make meal!

Shopping Tip:
Dried pigeon peas are usually kept in the ethnic food aisle of most grocery stores. One popular brand is Goya but there are others as well.

It’s important to allow the peas or beans to soften before adding the rice to the pot. It takes an average of 60 to 90 minutes of cook time for the legumes to get the desired soft, creamy texture.

It isn’t necessary to soak the peas overnight; 8 hours is plenty. However, soaking them longer than that may shorten the cooking time a bit.

Also, cooking the beans over low heat prevents the cooking liquid from evaporating too quickly. The lower heat also helps the peas to cook evenly.

If you make this recipe with canned kidney beans, the entire dish cooks up in less than 30 minutes. The downside is that it lacks the flavor that comes from using soaked dried beans.

To make this recipe with canned beans, you will need two 15½-ounce cans, drained. If using dried beans, you’ll need to soak them for at least 8 hours, then drain.

How can I make Jamaican rice and peas spicier?


For spicier heat, expose the seeds and membrane of the Scotch Bonnet peppers. Using the tip of a small knife, cut a slit down one side of the pepper. Be careful; you don’t want to cut the pepper completely in half.

How much does 1 cup of dry beans make cooked?

One cup of dried beans expands to 3 cups when cooked, and one pound of dried beans equals 5 to 6 cups of cooked beans. So, if you’re using canned beans, to make this Jamaican rice recipe, you will need two 15½-ounce cans. 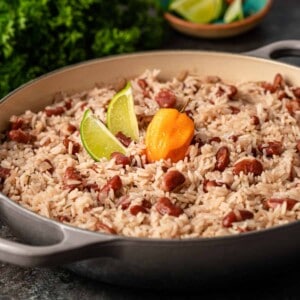 I’m too lazy to pick out the green onion, thyme stems, and allspice berries, so I added the green onion later, and used Thyme leaves and Allspice powder. I used Pigeon Peas because I normally use Red Kidney Beans and wanted to try something a bit more authentic, according to my Trinidadian friend.
I also used fresh Ginger chopped very fine, and because they are fresh, I used Garlic Leaves chopped very fine as well. Turned out great.
Thank You for this recipe,

You are so welcome Patrick, thanks for letting me know.

Good overall, though when using canned beans (made this on short notice; no time to soak!) there was far too much liquid. I reduced it to 2.5 cups of broth just on a hunch, but next time I will drop it further to 2 cups and hopefully it will turn out less mushy.

I really appreciate that this was a simple one-step recipe, in that I could dump all the ingredients in and had no other tasks until it was time to lower the heat. Super important when juggling multiple other dishes and kids!

Sorry that it turned out that way for you Mel, my thinking is maybe you didn’t drain the canned beans? I made a point of clarifying that in the recipe card and the Notes section? Regardless, thanks for trying it and letting me know!

I dont think you need to drain them. I didnt. You can “dry out” the rice by putting it on a baking sheet in the oven on very low temp

That is another way, yes.

I loved how simple you made the recipe. My first time trying this.

I love how simple this was! And it’s so delicious!

Yum!!! This recipe is such a great dinner idea. Love it!

Thanks so much Erin!

Interesting! I haven’t tried this before and I am excited to give this a shot!

Mmm! Delicious and so great with the touch of heat!

Kevin Is Cooking
Reply to  Patricia

Thanks so much Patricia!

I was so excited to make this and it came out absolutely amazing!

This recipe is so flavorful, I can’t believe it came out of my kitchen!