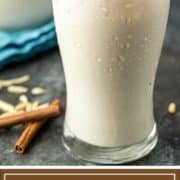 This deliciously sweet drink has roots going back to 13th-century Spain, where it is known as orxata. The spanish version starts with a blend of soaked tiger nuts and milk.

In Mexico, the drink has a base of white rice. There are versions that include coconut and/or raw almonds, but primarily, cinnamon is the flavor of choice.

My blended beverage has a few unique ingredients that I feel other recipes lack. It’s about balance of flavor right? Let me show you how to make horchata and serve it up at your next Taco Tuesday or other Mexican themed party.

If you’ve ever had almond milk, then you can imagine the consistency of this drink.

With the addition of cinnamon, vanilla and cloves, it makes a drink that pairs exceptionally well with everything from barbacoa beef to mole and chicken enchiladas.

Sweetened condensed milk– This ingredient adds sweetness to the drink. Condensed milk is made by adding sugar to evaporated milk, then reducing it to a thick, syrupy consistency.

For a healthier option, swap this out for sweetened or sugar-free vegan condensed milk instead.

White rice– Use regular long or short grain white rice, just avoid par-boiled (quick cooking) blends. Although I have never made the horchata recipe with brown rice, I can’t think of a reason that it won’t work.

Whole milk– It may go without saying, but using high-fat milk is key to a creamier drink. While you can certainly use low-fat milk, or even almond milk, the consistency will be very different.

Slivered almonds– Be sure to use raw almonds. These are usually available in the bulk natural foods section of most grocery stores.

Cloves were to me what had been missing in all other recipes I tried and salt is a must to balance out the sweetness from the sweetened condensed milk.

When you get to the recipe card, be sure to watch the video to see how easy it is to make. Then, fix a batch and surprise your guests with the creamy rice and almond milk drink.

Three Ways to Make It

After trying several different recipes and tweaking them to my flavor profile over time, I have come to the conclusion that there are three ways to approach making horchata.

I’ll explain each, then you decide which makes the most sense to you and your palette. The second version is my favorite.

This is a great, non-alcoholic drink to serve guests alongside my Green Chili Chicken Enchiladas. 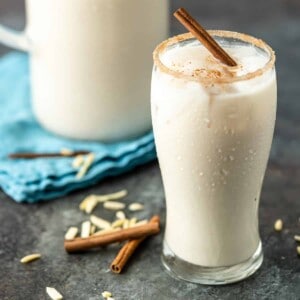 How many calories per serving?

I have it written in the recipe card at the bottom in the Nutrition section Paula: 319k, hope this helps!

Hi Kevin,
I made your second version the first time for my youngest who loves it from our local papuseria. Then, I decided to make it with almond milk, cooked rice, and no condensed milk just to see.It came out similar, but not quite the same.And I only did it because he drank the whole thing within a few hours!! He liked it, but noticed. It has less carbs, less starch, less cholesterol and fat, but a little on the lighter side, so good if you can’t get enough!

Kevin Is Cooking
Reply to  Tyler

Thank you for stopping by Tyler! I cannot wait to make it again!

Hi Kevin, love you recipes and learned a lot about Mexican cooking. Thank you.

How do I cut back sugar in this drink? Also, can this be scaled down to 4 servings?

Is kosher salt and the ground cloves optional or do u really recommend that?

Yes I do Victoria, although if want, try it without, you can always add it after to see the difference.

That color is coming from the cinnamon. Not sure why not Corey?

can you use rice milk to start it?

I never thought to do that, it would be one quick way to make this!

Hey Kevin. I have heard of this, but had no idea how to make it. Sounds very tasty and refreshing! And it’s something adults and kids can enjoy. Have a fun weekend!

Hey there Dorothy, don’t know how I missed responding to your comment here!
Every once in a while we make this for a Mexican themed dinner party. Not all of our friends drink alcohol (nor do we) so it hits the spot. 🙂