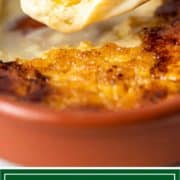 Crema Catalana is a Spanish custard dessert that’s rich, indulgent and so easy to make! This recipe creates Spain’s version of creme brulee, and it is SO delicious!

In the world of custard desserts, there are plenty to choose from. With choices like flan, creme brulee, pot de crème and crème caramel, you could fill up quickly. But don’t pass over the Spanish custard known as catalana!

Spain and France both claim ownership of this delicious custard dessert, but there are arguments over who made it first.

Apparently, each country claims that the other stole the original and then changed the name.  While both custards are similar, there are some notable differences.

Using a traditional circular iron (known as a Catalana iron) to sear the sugar on top is really simple. Don’t be intimidated; it takes 3 minutes over a flame to heat the iron up.

Once it’s hot, it takes about 20 seconds with it being held on top of the dish to melt the sugar.

Alternatively, use a kitchen torch or place the custards on a sheet pan under an oven broiler. Watch them carefully so the sugar doesn’t get too dark and you should be good to go!

The original recipe was a little too loose for my liking, so I increased the amount of egg yolks from 8 up to 10. This gives the dessert a wonderful texture and extra richness.

Strain the mixture if you’d like to remove any lumps or skin that may build up on the sides of the pan.

To do this, place a strainer and bowl in your sink and pour the custard into it. Stir using a spoon to press threw and divide into ramekins.

After the catalana finishes baking, it’s important to chill the dessert for at least 4 hours. If you skip this step, the custard will be too loose.

As a result, the heat from the iron or kitchen torch will melt the sugar into the custard rather than burning it.

Without the burnt sugar on top, the dessert will keep well in the refrigerator for about 4 days. If you’d like to make the custards ahead of time, place a layer of plastic wrap against the surface. This prevents a skin from forming.

If there are any of the desserts left over, cover them with a layer of plastic wrap or foil and store them in the refrigerator. Although the burnt sugar won’t have the same crackly texture, they can still be eaten. 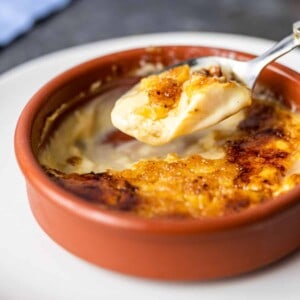 This sounds delicious. I love creme brulee, so what’s not to like with this!