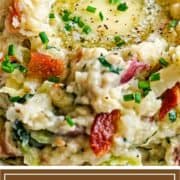 Irish mashed potatoes are perfect for St. Patrick’s Day. This colcannon recipe has cabbage and potatoes; add corned beef for a complete meal!

Colcannon has been enjoyed for more than a century and there’s a good reason: it’s creamy, comforting, and delicious.

This Irish mashed potato dish whips together chives, milk, butter, bacon, and just the right amount of cabbage. In fact, the word Colcannon stems from the Gaelic cal caenan’ which means ‘white-headed cabbage.’

Potatoes and cabbage, what could be more Irish than that? Adding corned beef, of course.

Corned beef casserole is a new take on a delightful classic and will surely satisfy the potato lover at your table. Or to really go all out, serve colcannon alongside homemade pastrami.

I like to serve traditional Irish mashed potatoes for St. Patrick’s Day in honor of my Irish heritage, but this dish is a fantastic way to spruce up the dinner table any day of the year.

A Word About Choosing the Right Potato

There are literally thousands of varieties of potatoes grown around the world, but the basic six types include:

Each type has specific characteristics that make it more suited for certain dishes. And since potatoes are loosely categorized by their starch content, it’s important to know the type of spud you need for your dish.

High starch tubers, like Russets, will have a soft texture when cooked and are well suited for baking and for mashing, but these tend to dry out, or else are easy to over boil, and that you do not want. No one likes a mushy potato after all.

Medium starch or all-purpose potatoes will be more on the smooth and waxy side. Blue potatoes fall into this category and are chock full of antioxidants. They are great steamed, baked, or boiled.

New Potatoes also land in this section on the starch scale. A “new” potato is any that is harvested while still young and small before its sugars have fully converted to starch. They’ll have thin skins, a very smooth waxy texture, and tend to be sweeter than many other types.

Low starch potatoes, like red, white, and fingerling, will have a smooth texture and work well in soups, stews, salads, etc.

I love using red potatoes for this recipe because the smooth texture complements the other ingredients well and I don’t have to worry about over boiling or about the dish being too dry.

Watch my video in the recipe card below and you’ll see just how easy this mouthwatering savory dish is to prepare!

This post, originally published on Kevin Is Cooking in March 2015, was last updated with new content on Jan. 26, 2021. 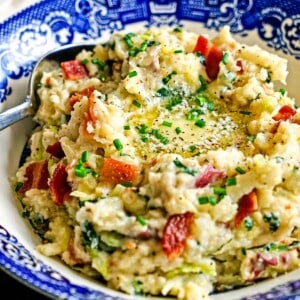 This is the recipe that introduced me to your site. I’d been making colcannon for years, but your version is next level. I make it every St. Patrick’s day and other times when I want a rich, delicious potato dish.

One of my all-time favs myself, love this recipe. Thanks Laurie! 🙂

Kevin, 3/17/21 I prepared these potatoes and they were a hit – delicious & creamy. I added double cabbish and no kale, but did add chopped up parsley – for green. And 1/8 cup of Kerrygold butter

I as a vegetarian didn’t wilt the cabbage in bacon grease but used olive oil. Red & black pepper – and they turned out spectacular- like all your recipes. We offered toppings of bacon, chives, cheese.

Kevin Is Cooking
Reply to  Dino

I am glad you tried these out! Thank you for sharing!

Kevin, These potatoes look great for St. Pat’s, but I want to watch the video, and I can’t find it. Its says it is by the recipe card, but I have looked from the top of the article all the way down to the bottom. I always enjoy your recipes. Thanks, Cappy

Cappy, the video is in the recipe card. You can also watch it here and subscribe to see all my videos here on Youtube: https://youtu.be/PpOzKgLhU1I

Thanks Kevin, I enjoyed it as I always do watching your videos.

Thanks for this recipe! Pefrect

Kevin Is Cooking
Reply to  Ina

Thank you so much Ina!

I made this , we really enjoyed it. I didn’t have kale so I used spinach also. And extra butter on top. Yummy

Thanks for coming back to let me know Joy, so happy you enjoyed this one! 🙂

I made this tonight for St. Patrick’s day and my family loved it. It turned out great! The only difference I did was to replace fresh spinach for the kale. It is a definite keeper!

So glad you and the family enjoyed this Kristi. Thanks for taking the time to come back and let me know! 🙂

I, like, NEED to have these in my life. I’m about to microwave my halfheartedly assembled lunch here at work, and it makes me sad it’s not these potatoes instead. These sound awesome, and I’m going to have to try them sometime! I’ve never made these kind of potatoes before 🙂

I could make a meal out of this alone myself! 🙂

I remember these Kevin! And yes, I’m drooling! Perfect side for St. Patrick’s Day! Yay Grandma!

Thanks Mary Ann, cheers to a fantastic St. Patrick’s Day to you guys! 🙂

Actually Mimi it translates to “white-headed cabbage” and I’m sure each family has it’s own version. Hope you give this one a try. Cheers!

I’m STILL drooling over these from the first time you published them, Kevin! The video just knocks it out of the park! Pinning again.. because these ‘taters deserve ALL the pins!

Thanks so much Cheyanne. Truth be told I make this even when it’s not the holiday. 🙂

Absolutely delicious! I can already see myself making this and not sharing with anyone. 🙂 Love it!

We think alike Tessa. 😉 Thanks for stopping by!

What a flavor bomb! Might be my new favorite way to have potatoes. 😀

Author
Kevin Is Cooking
Reply to  Giselle @ The Busy Spatula

Thanks Giselle, it definitely works for me. It could be a meal all on it’s own! 😉