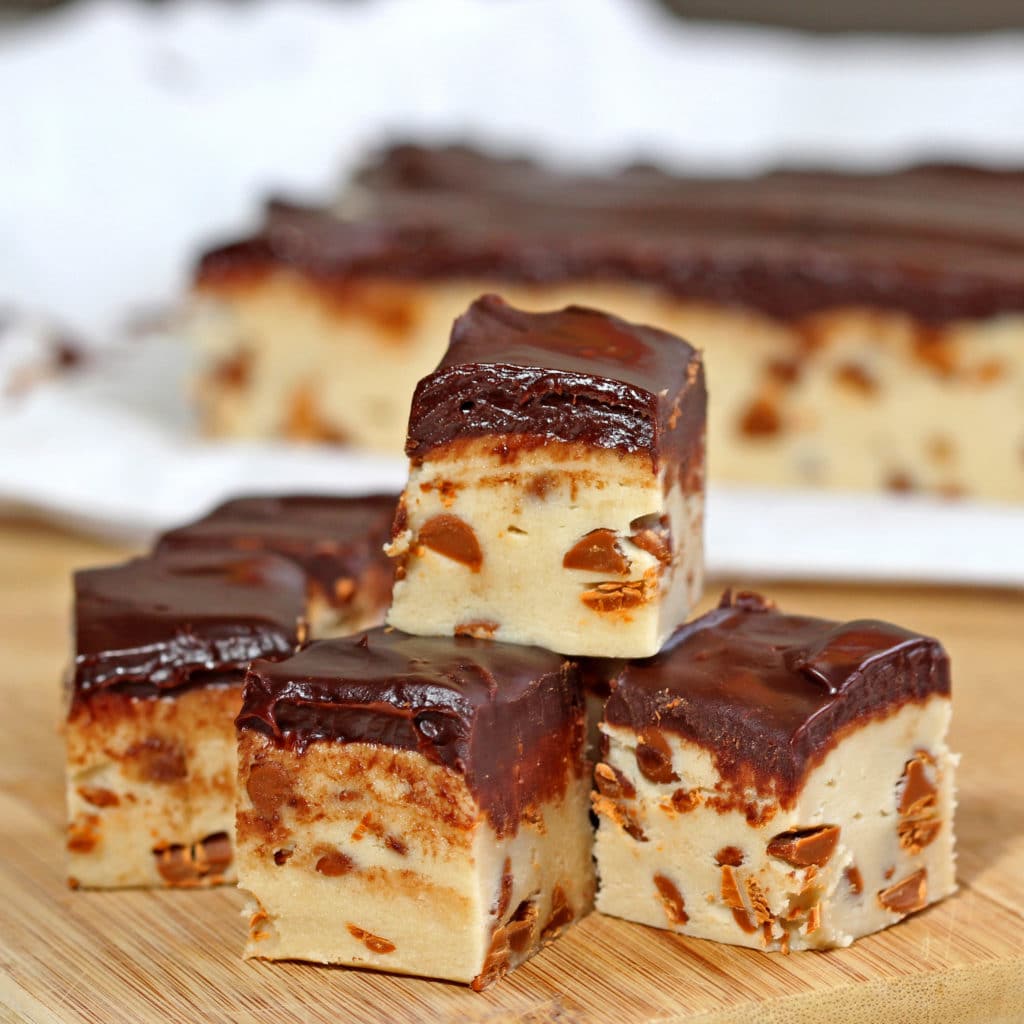 YUM! This is a no-bake, no-brainer dessert treat for sure. Talk about delicious!

Who doesn’t love scooping a finger full of cookie dough before baking them? Me, that’s who and this is a cinch to make as well. It’s the waiting game of these guys to set up in the refrigerator that is the hard part in making these.

Instead of the default, go-to chocolate chips I opted for a cinnamon chip instead. It lends a beautiful, sweet bite and topping it all off with a chocolate ganache is perfecto! 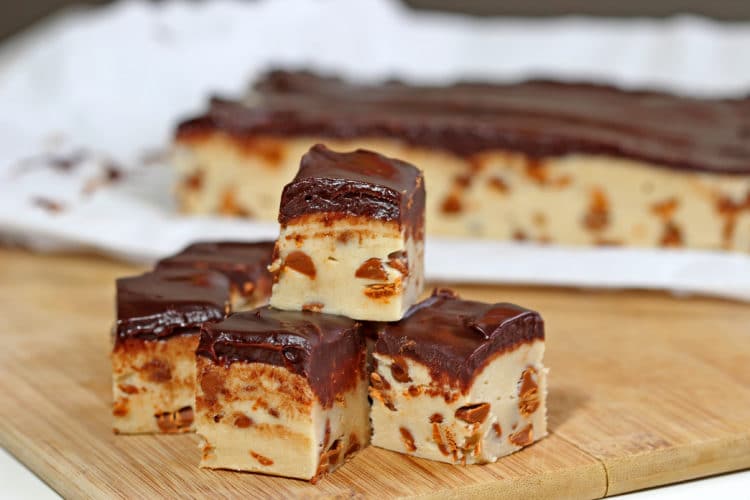 Busting out the Kitchen Aid mixer to make this an easy task, I beat the softened butter and brown sugar until it was a pale yellow and light and fluffy. It took a few minutes and of course I had to test and dip a finger in to taste. Yes, it’s as good as I remember and with the addition of the kosher salt and vanilla extract it was a great tease of what was to come.

After the butter mixture is done it’s time to add the sweetened condensed milk. Make sure you don’t goof up and use evaporated milk, you don’t want a loose dough that will never firm up right. Once incorporated add a cup of flour, one at a time. Remove the mixing blade and with a spatula fold in the cinnamon chips.

I came across these cinnamon chips not too long ago when in the baking aisle. They are a great change from the normal chocolate or butterscotch chips and since they were made by Nestlé how could they be bad. Believe me, they are not. And sometimes I’ll drop a few on top of my hot oatmeal. 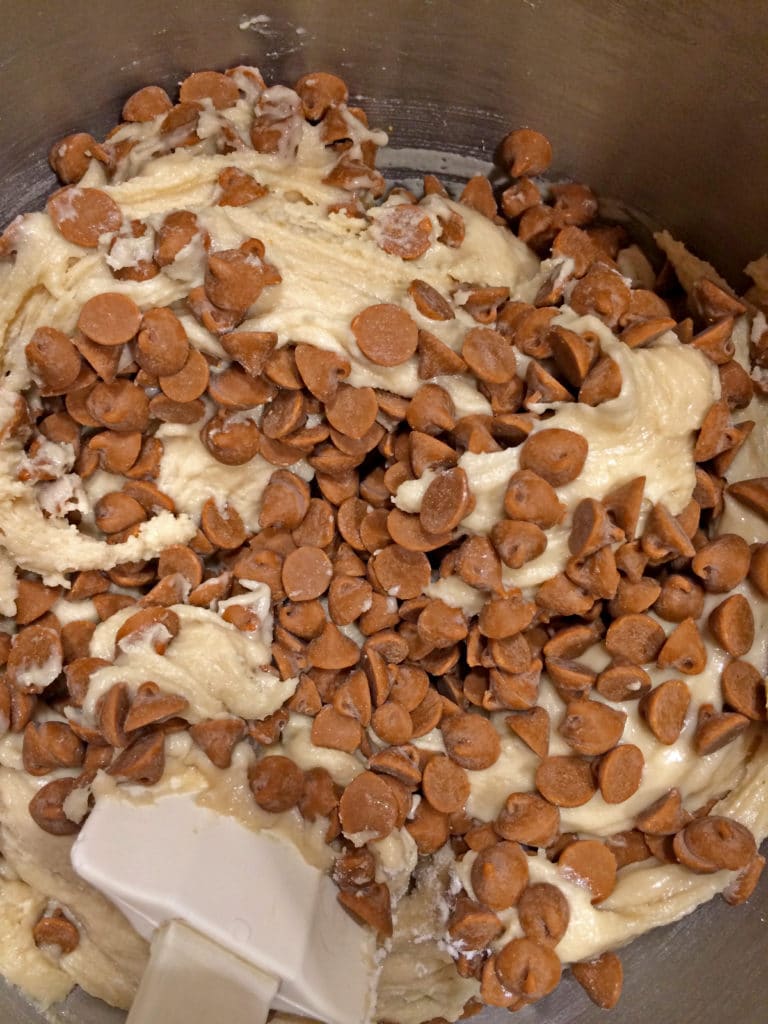 Next up, pour the cookie dough mixture into your pan that you lined with the parchment paper. It will make removing these this much easier. Make sure there is a half inch or so hanging off the ends.

Press the dough into the corners and using a rubber spatula I dipped in water it worked perfectly. Top the dough with a sheet of plastic wrap and in the refrigerator it went – for 3 hours minimum. 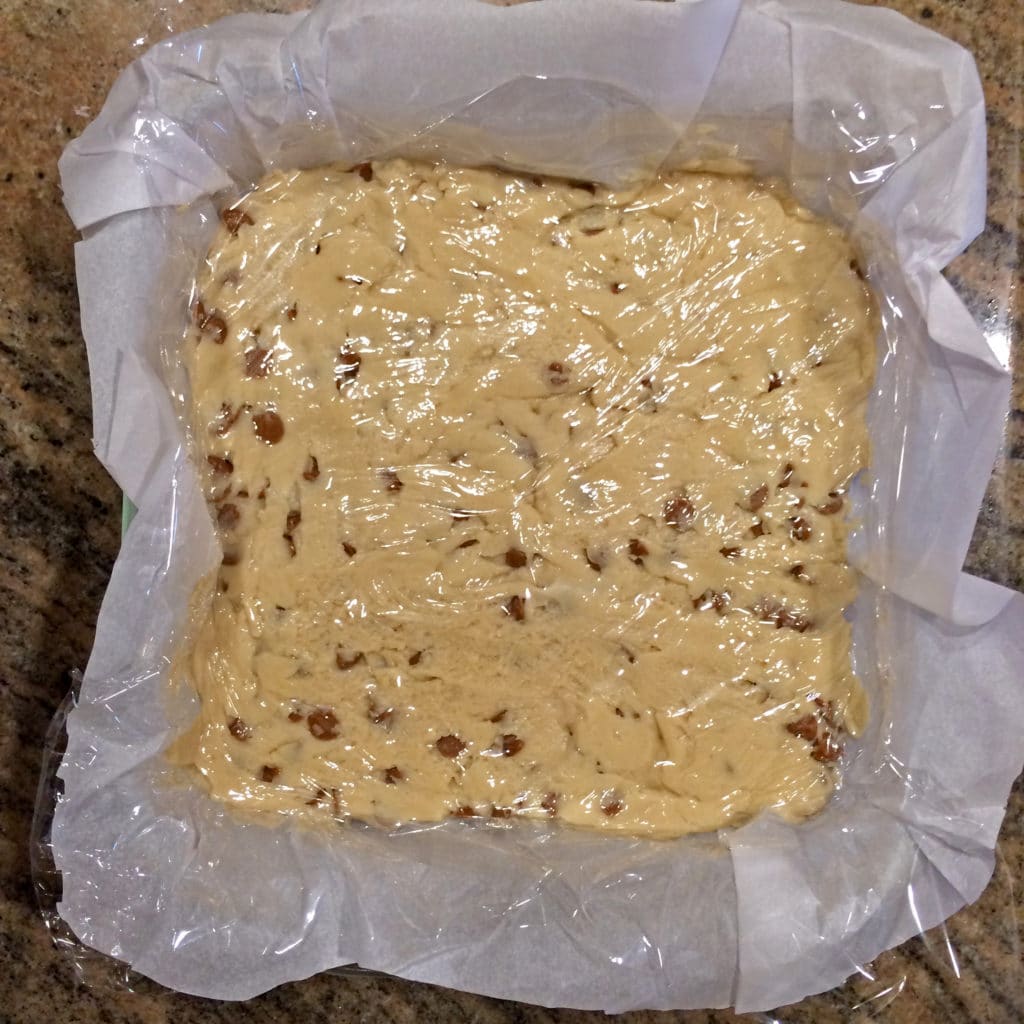 In the top of a double boiler combine the chocolate chips and whipping cream for the chocolate ganache topping. Placed over the simmering water, stir often with a whisk until the chocolate is melted and incorporated into a thick sauce. Allow this to cool, but not harden. I made this about two and a half hours into the dough firming up in the refrigerator.

Pour and spread the ganache over the top of the chilled dough and place back in the refrigerator and chill for 1 hour minimum until firm. 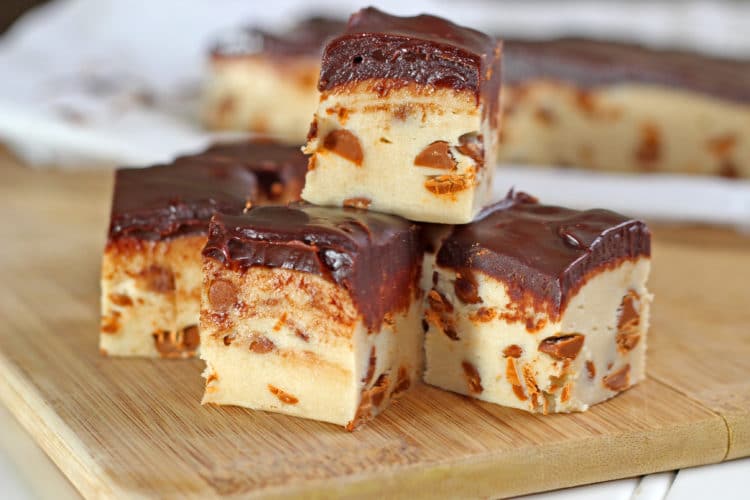 Use a sharp knife dipped in hot water and wiped dry to slice into bite size bars. 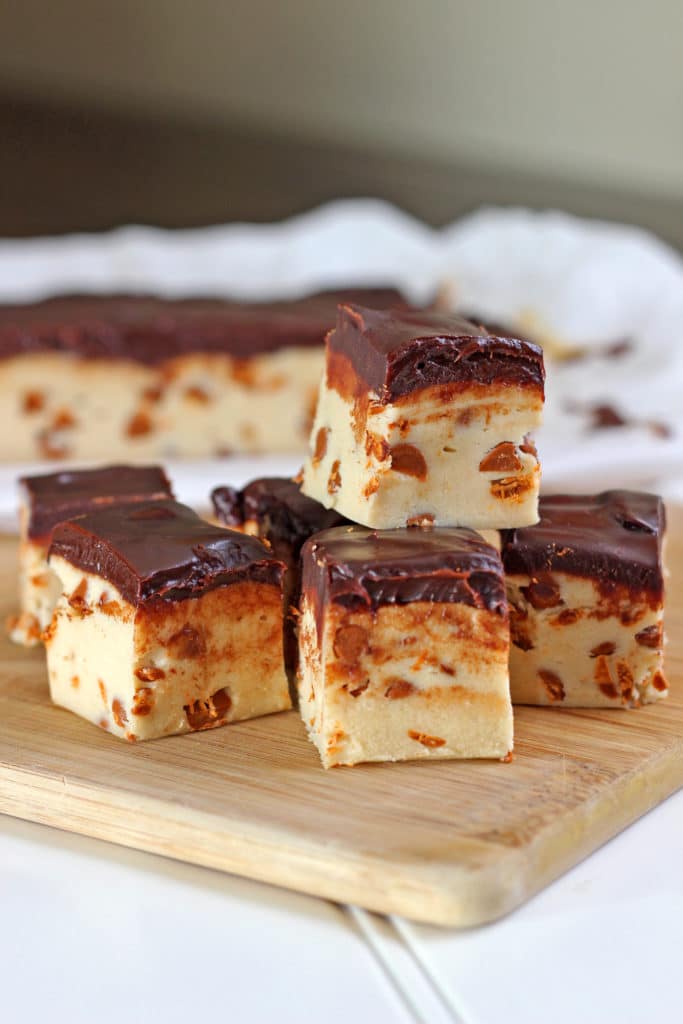 Look at this deliciousness! And the best part is they taste better then they look. 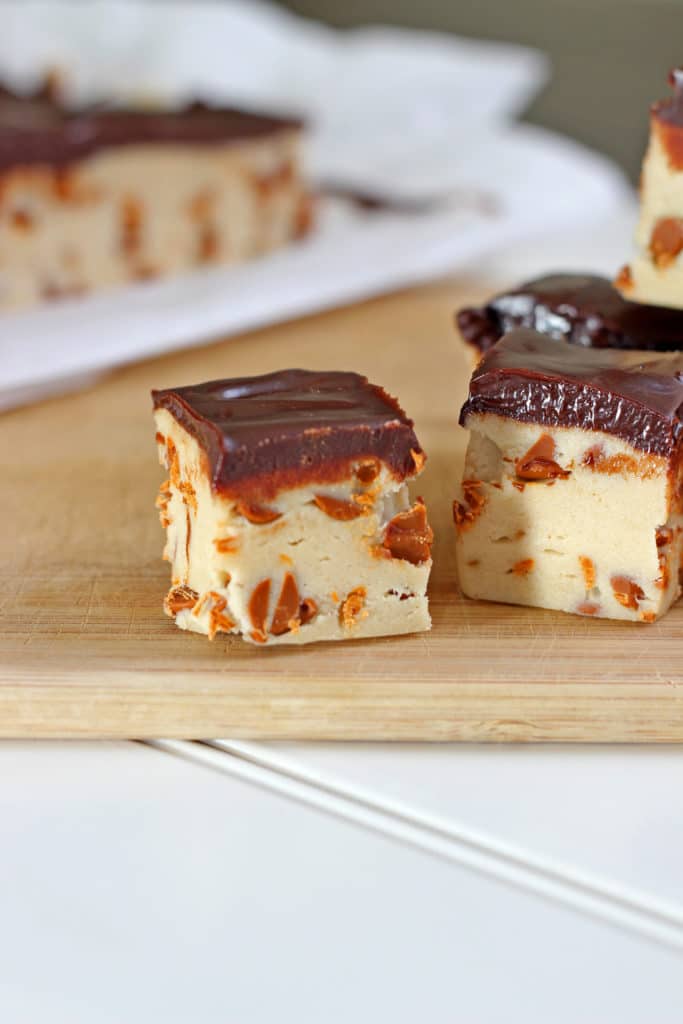 Each has a firm and delicious dough and the crunch of the cinnamon chips mixed with the ooey-gooey chocolate ganache topping is perfection. 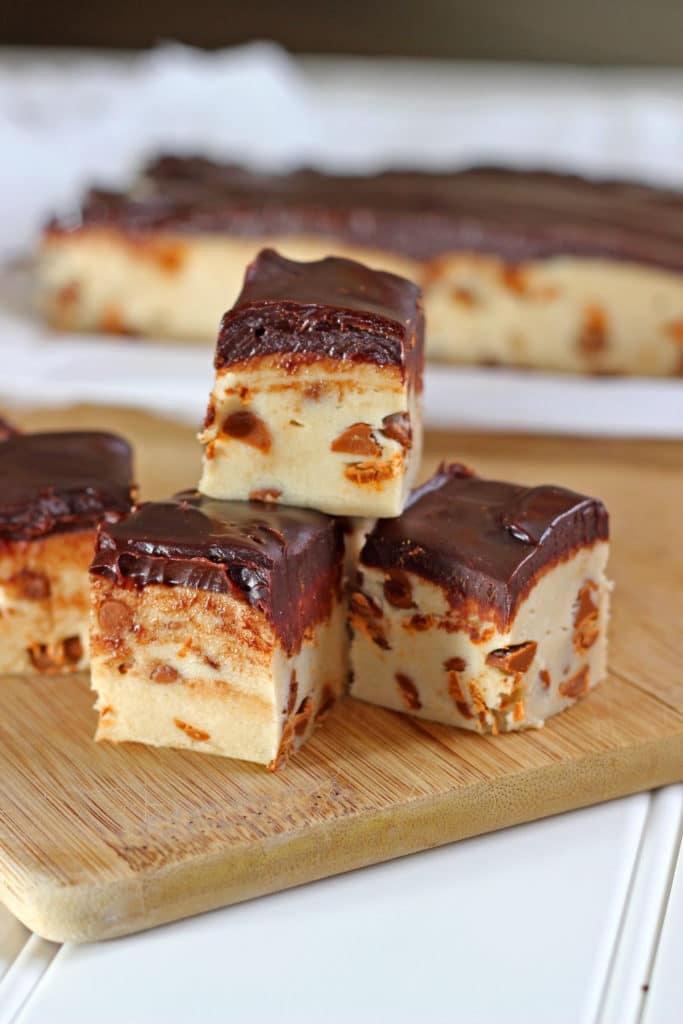 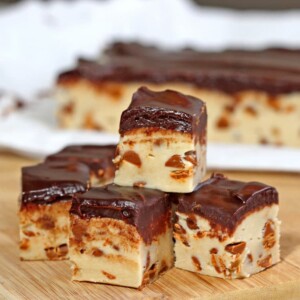 Love these! I love little treats you can just pop in your mouth!