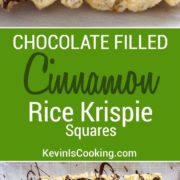 These Chocolate Rice Krispie Squares are ridiculously delicious, addictive and I have a new video to show you just how easy to make, too. I had the idea to make churros with dipping chocolate but the thought of cleaning up put a halt to that idea pronto. Though it got me thinking of cinnamon and chocolate (doesn’t everyone dip their churros in melted chocolate?) and after seeing a rice krispie treat the other day online I thought I’d work a little magic. 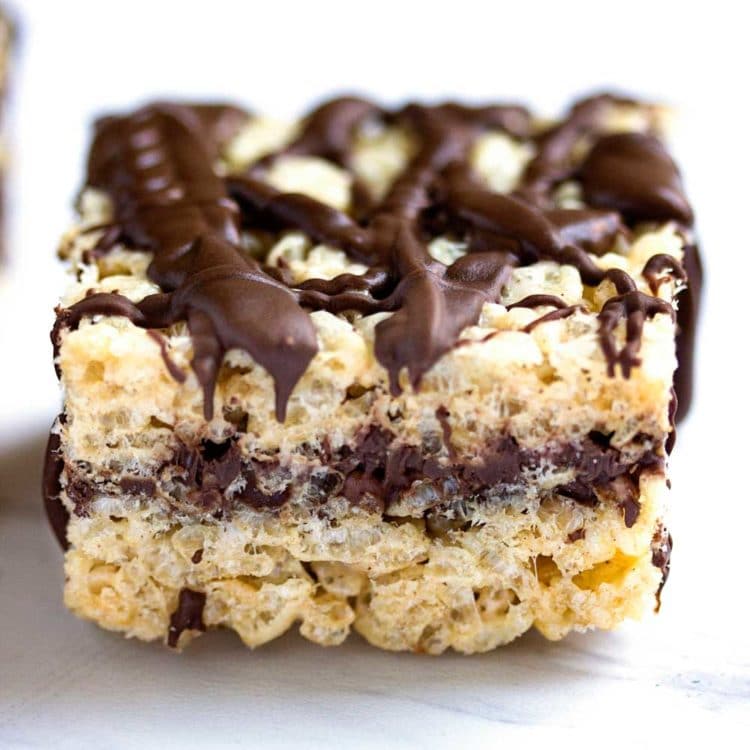 These are off the hook good. Seriously. I made these and brought them to a meeting and all 23 were gone in a hot flash. Before I could say dig in folks there was nothing left but the chocolate drips on the parchment paper. Note I said 23, I needed to test one, right? But really, look at these and tell me they’re not going to be incredible. The cinnamon is in the melted marshmallow, so, so good!

A while back I saw a recipe for Churro Rice Krispie Treats over on Kitchen Konfidence by Brandon. He said he was inspired by a local San Diego baking company, Bliss & Baker a small-batch baking company specializing in artisan “rice crispie” treats. 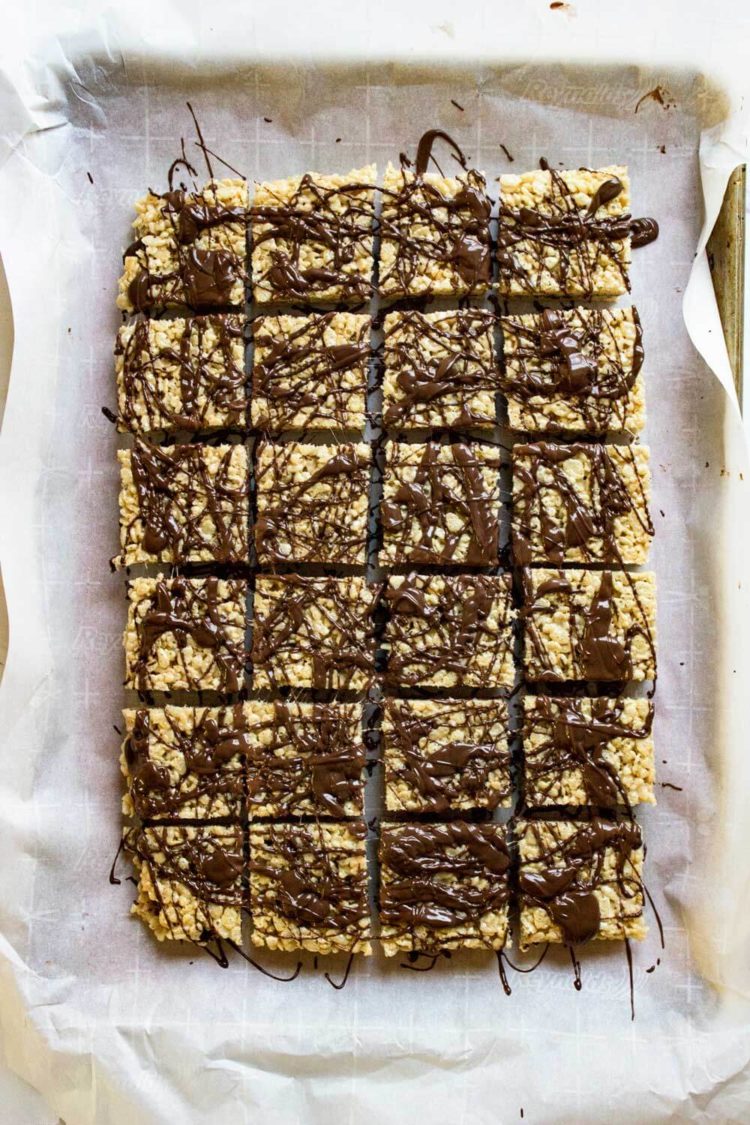 I needed to switch it up a bit and chocolate had to be involved.

Instead of sprinkling the cinnamon sugar mixture on top I would put the cinnamon in the marshmallow, too. Guaranteed cinnamon and chocolate in every bite!

Now this one is definitely indulgent. 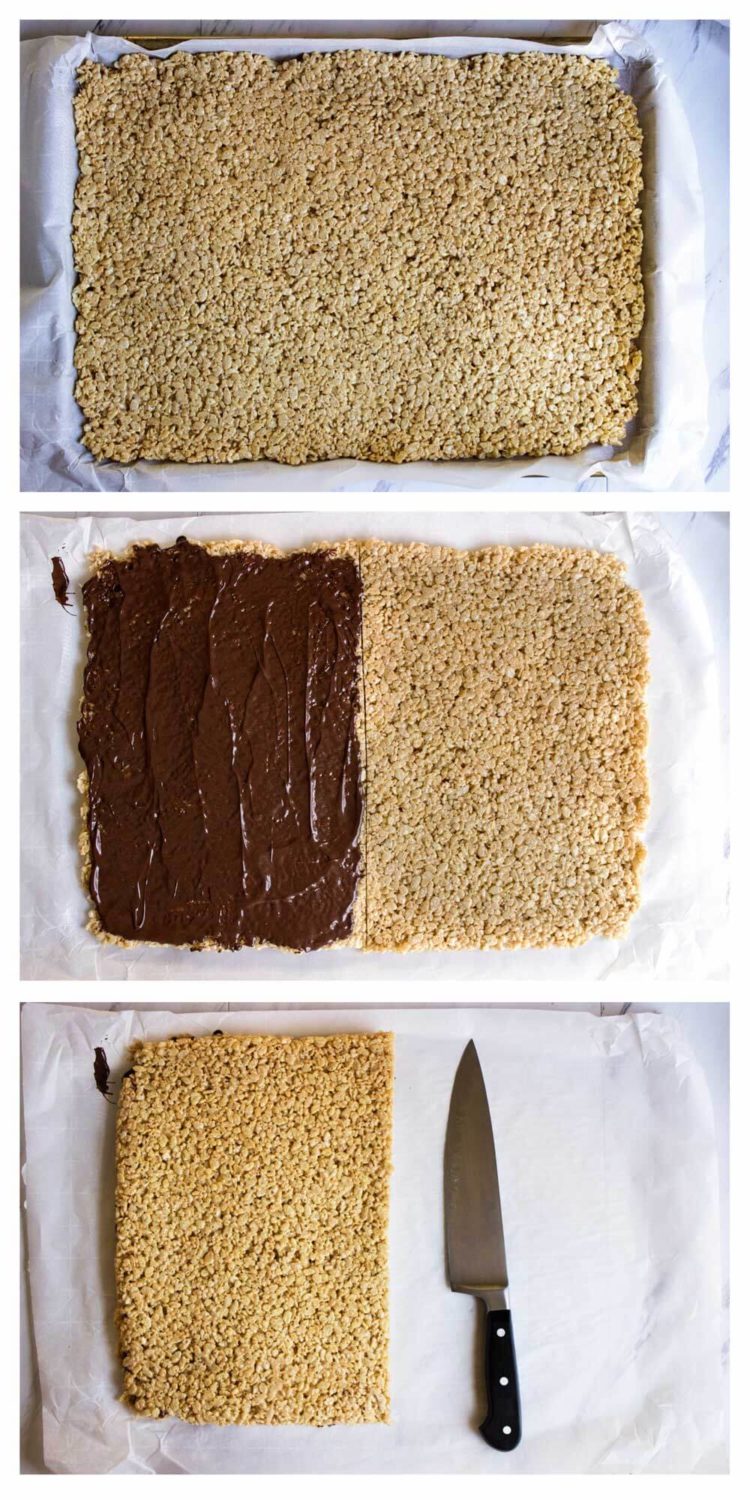 I opted to lessen the amount of butter, skipped the added sugar from his recipe and stuck to the original on the back of the cereal box. I added some amazing vanilla from Nielsen-Massey Vanilla, sprinkled the cinnamon in the melting butter and marshmallow mixture then tossed those Rice Krispies in.

The aroma was amazing and I moved quickly with a spatula to spread on a large baking sheet to cool and later cut. 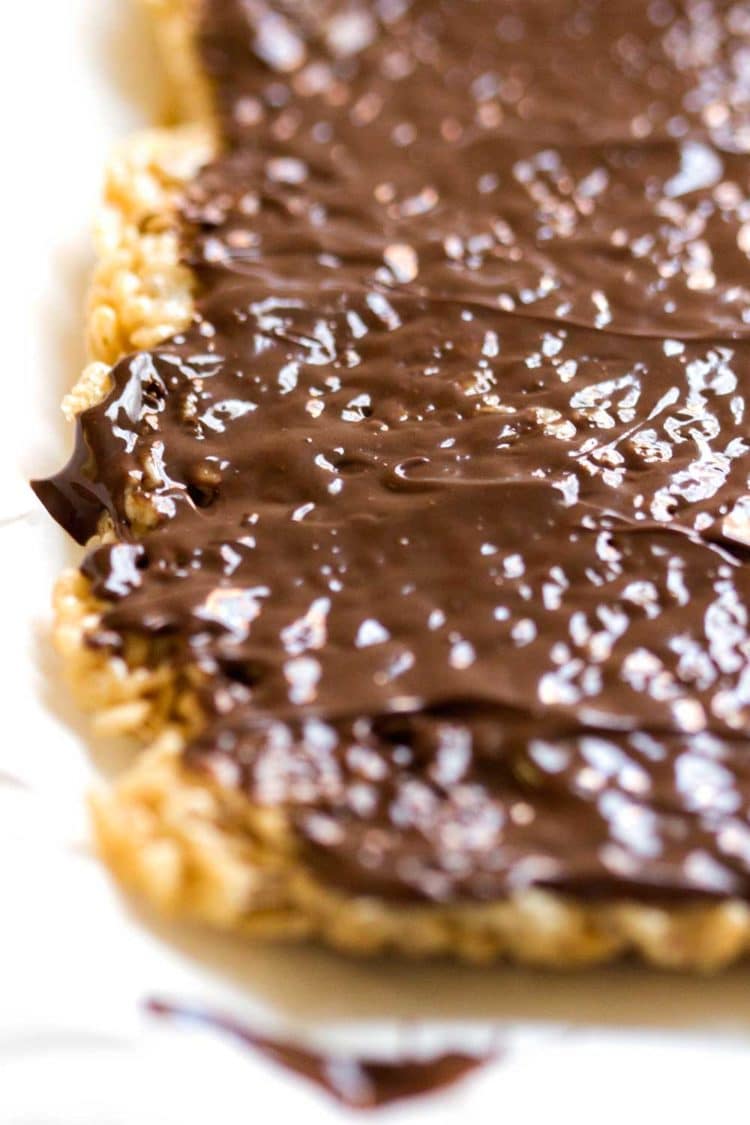 Needless to say I used a really large baking sheet, not the recommended 13×9″ pan, but my cookie 17.5×12.5″ sheet pan. I immediately thought they’d bee too thin to hold their shape for dipping and decided to double-decker those bad boys after they cooled and seal them with melted dark chocolate in between. Saved that goof. 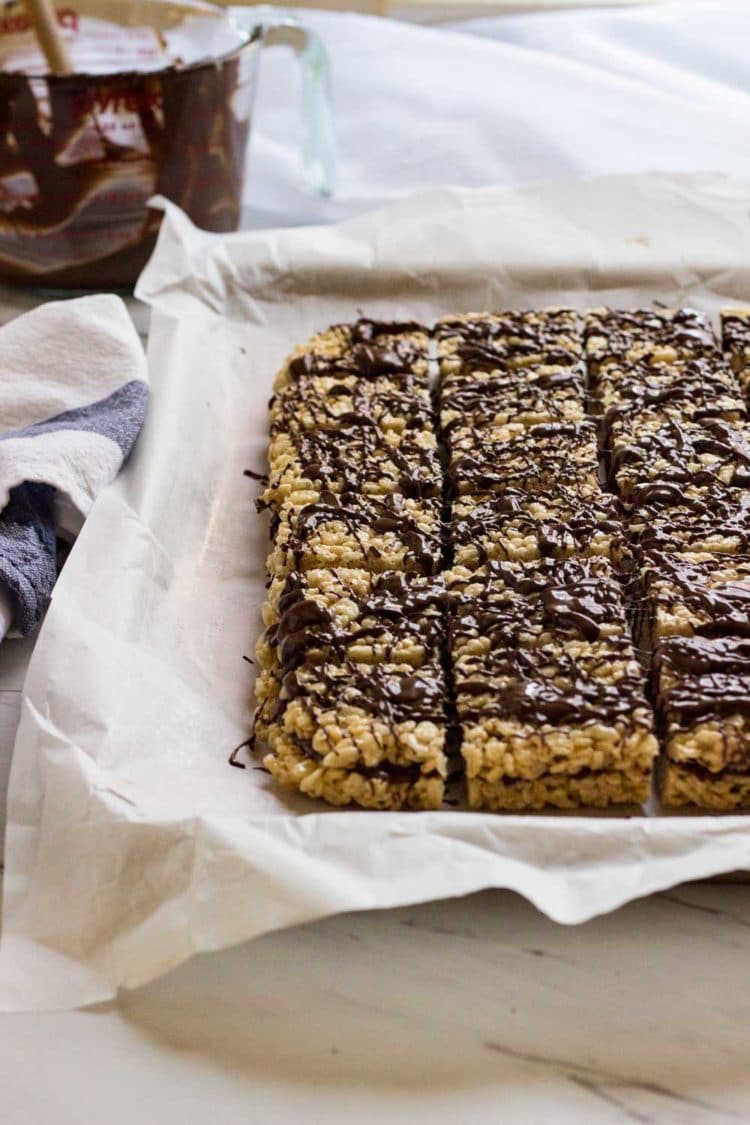 What came out of this was a crazy good, super easy and fun dessert treat that I promise is not overly sweet like you might think, but will be gone in no time. Chocolate Rice Krispie Squares! Enjoy! 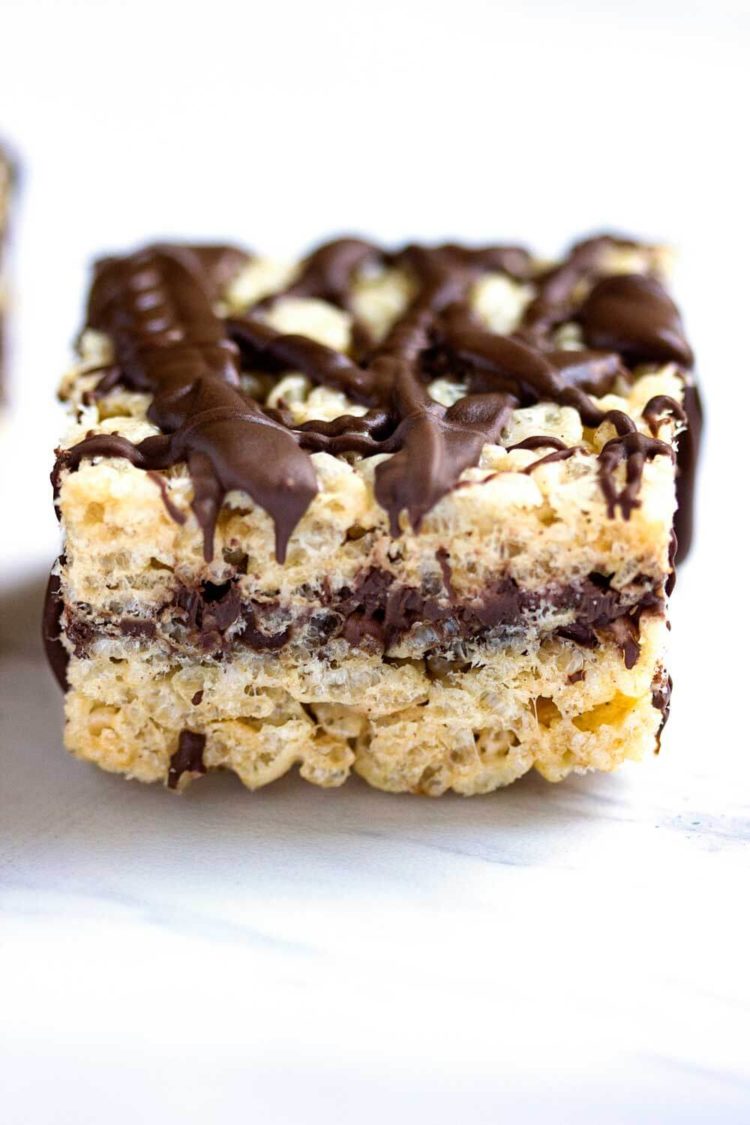 This recipe was originally published here on Kevin Is Cooking on August 12, 2016 and has been updated with a new video. 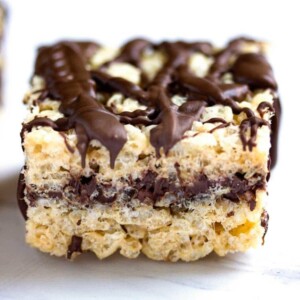 1. I used my large stock pot for a little elbow room when stirring, it's sticky stuff.
2. Either coat the spatula or spritz a little cooking spray on surface of Rice Krispie treats and smooth out.
3. You may need to blast the melted chocolate again for 15 seconds to smooth if thickened.

These look amazing. Will keep the idea. years ago, when my kids were small and I began to think about cooking healthy treats for them, I got the idea of using oat cereal rings (cheerios) instead of puffed rice to increase the overall food value. Since the I have also used puffed crispy brown rice cereal. We like the oat rings better. And I bet your version would work a treat as well. I have also used peanut butter in place of most of the butter (all but 2 tbsp). With your melted chocolate, that would be amazing. I learned… Read more »

Kevin Is Cooking
Reply to  Judy

I hope you give them a try Judy! We really love them!

Oh yeah, I remember these bad guys:) Believe it or nor, but I’ve made my first puffed rice treats just recently. And you were right last year saying this stuff is highly addictive – I’ve ended up making some almost every weekend. So please share more fantastic ideas:) Happy Easter!

Haha! So glad you enjoy these Ben! Hope you two had a wonderful holiday, too. 🙂

Love this easy treat 🙂 I would love to try it 🙂 not healthy but looks so good 🙂 pinned!

Thanks Farida! Every now and then you can indulge. 😉

Rice Crispy Treats were my all-time favorite dessert as a kid and I haven’t had one in years! This jazzed up version looks totally irresistible!!

A slight riff on the flavors and crunch of a churro started it all! Thanks Marissa. 🙂

Forget about the goof: I think putting chocolate in between and on top is brilliant. The treats are gorgeous.

Author
Kevin
Reply to  Jeff @ Make It Like a Man!

Thanks so much Jeff, snack on! 🙂

What an easy recipe! I’m surprised you only tried one piece before you took it to the meeting. I would have eaten a quarter of it. I need to pass this one on to my friends as their kids would love to get into the kitchen and make this one!

So true John, super easy. My only problem is that if I started on more than one I’d be in trouble. Maybe next time I’ll cut bigger squares!

What a great way to “grow up” rice krispie treats, though I think everyone of every age at my house would love these. And I love the idea of mixing the cinnamon into the marshmallow. The chocolate and cinnamon combination, always a winner! Great job, Kevin.

Thanks so much Sally. Great seeing all of your family photos as of late on social. Have a great weekend!

Oh good gawsh!!! This looks insane! That chocolate in the middle and the cinnamon spiked rice krispies! Wow!!! Kevin, tbh, I’ve never been much of a rice krispie fan as I thought they were too bland – but this is so NOT bland! My mind’s blown – I’d have polished off that tray by myself! Now I’ve gotta dip my churros in melted chocolate next, I’ve been tearing them up and adding them to soft serve vanilla!

Haha Shashi, gotta dip those churros! This one was a delicious accident that started one way and detoured into oh my goodness territory. So good. I can still remember smelling the cinnamon and marshmallow and then the biting into chocolate… oh I better just go make another “small” batch. Cheers to a fantastic weekend friend. 🙂

Kevin, you’re the King of No-Bake Desserts (as well as Flat Bread) – these treats are fan-tas-tic! And surprisingly, they’re not too high in calories so I’ll gladly grab a 4 or maybe 7 pieces:) Well done!

Thanks Ben, be aware they are addictive. 🙂

Hey Kevin! I haven’t made rice krispie treats since my kids were young! Love the chocolate layer! I have a bag of Ghirardelli melting wafers! Guess I need to pick up some cereal and marshmallows! Have a great weekend guys!

You won’t be disappointed Dorothy. I’m glad I brought them to a meeting as I could literally have at least 6+ in one sitting. Enjoy your weekend and hello to Gary. 🙂

That double decker idea was brilliant! That beautiful layer of chocolate in the center is such a pretty feature. And cinnamon melted into the marshmallows?! I’m sold. 🙂

I think my goof worked to my advantage and did not disappoint! Thanks so much Faith. Cool photos of Poland, too. Thanks for sharing and have a great weekend. 🙂