Moroccan food has always interested me as well as Middle Eastern food due to it’s exotic use of spices, dried and pickled fruits like Preserved Moroccan Lemons. You can pair your preserved lemons with olives in this traditional Moroccan tagine, which is braised.

Typically, a tagine is a rich stew of lamb, chicken, or fish, and usually includes vegetables or fruit. A tagine is a unique type of ceramic or clay cookware that’s popular in Morocco. The bottom is a wide, circular shallow dish used for both cooking and serving, while the top of the tagine is distinctively shaped into a rounded dome or cone. If you do not have a tagine a Dutch oven will do, like my trusty Le Creuset.

In this tagine all the typical players are here: preserved lemons, green olives and chickpeas. Chickpeas are also known as garbanzo beans. The addition of saffron along with toasted, ground coriander and turmeric creates a wonderful base when sauteed with onions. I like to brown the chicken first to get a deeper flavor and the slow simmer fills your kitchen with an amazing, mouth watering aroma. 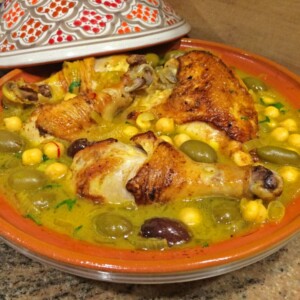 Just made this first time and already addicted

Good stuff right? Thanks for taking the time to come back and let me know! It’s a favorite of mine, too. 🙂

If I didn’t have something to cook it in the oven with, could I convert this to stove top pot cooking?

Certainly, this was just using the traditional method.

What would be the conversion?

I do state in the recipe to use either the tagine or a Dutch oven. No time changes Elizabeth.

OH Kevin dear, how much have I enjoyed your recipes. My family loves the chicken tajine and I fix it often!

Thanks for taking the time to come back and let me know Louisa!

thank you for sharing this excellent recipe! After returning from Morocco with a traditional tagine pot in our bag I was so anxious to find a perfect chicken with lemon tagine recipe – and yours turned out to be just delicious! I can say that our first attempt to make dish in a tagine was just a complete success – thanks to you! 🙂

There’s nothing like traveling and picking something up that reminds you of the trip, right? What a fantastic purchase for yourself. Thanks for coming back to let me know Ibi!

Kevin, after chickpeas are added and the chicken is returned to the dish, does it not cook a bit longer?

Hi Eric, thanks for visiting and the question.
I updated the recipe to reflect “Cover and allow to rest for 5 minutes. The chickpeas and olives will be heated through (this is hot).” No more cooking in the oven is necessary. After the initial browning in the pan and then the 50 minute simmer in the oven, the chicken is cooked through and mighty tender.

Wow! Such a gorgeous and flavorful dish Kevin!

What a gorgeous dish Kevin…so full of rich flavors! Thank you for sharing your tagine cooking tips and techniques so that more of us can learn how to recreate this authentic Moroccan dish in our own kitchens.

Thanks for stopping by and the kind words Linda. Let me know how yours turns out.