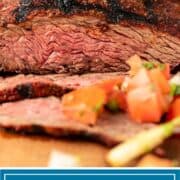 A Bavette steak with sazon seasoning and fresh pico de gallo is a fantastic summer meal. Make this recipe with a cut of sirloin flap on your grill- it only takes 10 minutes to cook!

Summertime is about enjoying the great outdoors. For some, that includes cooking fantastic food to share and enjoy with family or friends.

If I’m doing the cooking, chances are good that the food will be grilled or smoked. I like to make grilled salmon or chicken, Jamaican jerk pork ribs, and of course, steak!

Whether it’s to make grilled ribeye, bacon wrapped filet mignon, or something else, don’t let the summer slip by without firing up the grill for the best meal ever!

What cut of meat is Bavette steak?

Bavette (a French word meaning bib) refers to any flat cut of beef or pork. Most often, it’s a flap, flank, flat iron, or skirt steak.

In France, sirloin flap meat is known as bavette d’aloyau, which translates to the bib of the sirloin.

Due to its thin size, a Bavette steak is good for high heat, quick cooking preparations like grilling and broiling. I think a grill works best, either outdoors or a stovetop grill pan.

For this recipe, I use a cut of sirloin flap, cooking the steak on the grill to medium-rare.

Not all cuts of beef need to be tenderized, but flap meat does. I use a dry rub of sazon seasoning for this recipe. However, if you’d like to use the sirloin flap for steak fajitas, a dry fajita seasoning works well.

For dishes like carne asada, you don’t need much dry seasoning. This is because the beef is tenderized with a wet carne asada marinade.

Cooking Bavette Steak on the Grill

How long to cook a Bavette steak depends on the cut of meat you use. Flank and skirt are relatively lean cuts, so they can be cooked a bit longer than cuts like a sirloin flap.

For flap meat, I recommend cooking to rare or medium-rare, as it tends to be a little chewy otherwise.

Medium-rare steak on the grill preheated to 450°F. typically requires 5 to 6 minutes per side.

As mentioned earlier, Bavette steak is a long, flat piece of meat. For serving, it’s best to cut the meat into three or four pieces first, slicing with the grain. Then, rotate each of those pieces 90° and cut thin slices against the grain.

The grain is easy to see; it’s the natural lines that run through the meat.

I have some other serving suggestions below, but definitely consider serving this meal with a side of Mexican charro beans or Tex-Mex style slow cooker cowboy beans, and a hasselback potato. For a change from traditional mayo-based sides, go with something healthier, like this delicious barley salad.

How do you tenderize a bavette steak?

Either a dry rub or wet marinade works well with a Bavette cut of steak. The tenderizer or marinating method you use will depend on the recipe you are making.

What side dishes are best with steak on the grill?

Pork or beef steak on the grill is fantastic with sides like baked potatoes or smoked potato salad. Make some grilled corn on the cob (or authentic elote if you’d like!). For a fancier meal, steakhouse creamed spinach and a caesar salad with homemade caesar dressing are perfect. 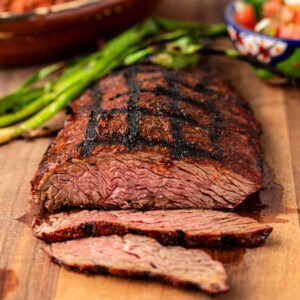 Bavette Steak (Cooked on the Grill)

I can’t resist this meat dish! This steak is so inviting!

This steak was so juicy and so flavorful! One of the family’s new favorites! My daughter made a taco out of this steak and she loved it! Will be making here again!

The seasoning on this is amazing!

This is going to be happening at my house often! Flavors were spot on!

Thanks Kelsey! I am so glad you enjoyed it!

I know for sure this Bavette steak would be a huge hit in my house!

I bet it will be too! Let me know how everyone enjoys it!

This looks so juicy and excellent!

So juicy and just full of flavor. Would make again!

Kevin Is Cooking
Reply to  Krystle

I am so glad you would make it again! Thanks for sharing that!

Love the grilling tips, thanks for sharing!

Kevin Is Cooking
Reply to  Erik

Thank you Erik! I am glad you found them helpful!

Thank you for explaining what a bavette steak is! I always thought it was a specific cut of beef.

Kevin Is Cooking
Reply to  Kay

I am glad you found it helpful! Thank you Kay!

This is a great one so tasty

Kevin Is Cooking
Reply to  Dave

I have to agree Dave!