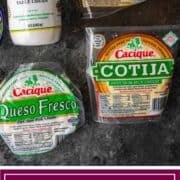 Tacos, enchiladas, carnitas, burritos, dips, salads – many Mexican dishes wouldn’t be the same without the addition of Mexican cheese! Whether you like fresh, aged, mild, or melty varieties, there are so many types of queso to discover.

What’s an enchilada without a bit of Cotija, or, what’s my Chili Relleno recipe without my special Oaxaca filling? You can technically serve up any dish without the addition of cheese (okay – maybe my Mexican cheese dip recipe would be a bit difficult), but it can go a long way to making your Mexican meals even more delicious.

In fact, most traditional recipes didn’t originally call for cheese. Before the Europeans arrived in Mexico, cheese-bearing animals like goats and cows weren’t native to the area. That said, cheeses like Queso Fresco, Oaxaca, Cotija, Manchego, Panela, and more are now key to many authentic recipes.

I’m always interested in learning about the origins of my favorite meals and improving my recipes. I know many of my readers are too, which is why I decided to come up with this complete guide to Mexican cheeses!

There are dozens to discuss and I’ve decided to concentrate on the most common – and the most delicious. Read on to discover more.

First up is Queso Fresco, one of the most common types of Mexican cheeses – and one of my personal favorites. Queso Fresco translates to “fresh cheese.” It’s similar to feta in that it’s a fresh, crumbly, and white Mexican cheese. You can find both salty and non-salty versions. It’s often used as a topping for dips (like guacamole) or other appetizers.

Queso Añejo is the aged version of Queso Fresco. Añejo means “aged” in Spanish. It’s much harder than its fresh counterpart but equally as crumbly. Because it has been aged, it has a sharp flavor. It’s a Mexican crumble cheese that goes great on top of refried beans and salads. It can also be baked and grilled.

Cotija is another one of my favorites and one that you often see on the blog. It’s aged and features a dry and crumbly texture. It’s sharp, salty, and is very similar to Parmesan. It’s a popular Mexican white cheese and goes great on grilled street corn (Elote). You can also add it to salad, soup, or beans. Its namesake is a town in the state of Michoacán.

Panela is a hard, smooth, and salty cheese variety. It’s made with skim milk, making it different from Queso Fresco in both texture and flexibility. Panela can’t be crumbled, but it’s very easy to cut into. Some people enjoy it fried as it doesn’t melt! It squeaks when you bite into it, like some American cheeses. You can eat it on its own as a snack or add it as a topping on a sandwich.

Requesón is Mexico’s answer to Italy’s ricotta. It’s very mild, not salty, and is also similar to cottage cheese. You can easily spread requesón, so many chefs use it in enchilada filling, empanadas, or gorditas, which are corn cakes stuffed with different types of filling.

Manchego is another popular cheese out of Mexico. It shares the same name as a Spanish cheese, but this version is made with cow’s milk instead of goat’s. It’s light yellow in color and is easy to shred and melt. Enjoy it on its own as a snack, or use it as a Mexican quesadilla cheese.

Oaxaca cheese comes from the Oaxaca region. It’s a type of white string cheese that is quite soft. It melts very easily, making it a popular choice for fillings – it’s another queso variety that you’ll often see in my recipes! My Enchiladas Rojas wouldn’t be the same without it, nor would my Chili Relleno!

Queso Chihuahua has nothing to do with the dog – rather it originated in the state of Chihuahua! It’s sometimes referred to as “Queso Menonita” as the Mennonite communities in the area were the first to produce it. It’s aged, firm, and yellow and is often compared to cheddar. It’s a Mexican melting cheese and is used most in cheese dips.

Learn how to make it at home with my Mexican Crema recipe. I love it in my Rajas con Crema and Avocado Crema recipes. You can even use it in desserts.

Next up on my list is Queso Asadero, another Mexican melting cheese. It’s creamy, smooth, and makes a great addition to quesadillas – it’s even sometimes referred to as “queso quesadilla.” Some chefs enjoy it on pizza too because it melts so wonderfully.

Last, but not least, is Queso Enchilado. It’s the spiciest cheese on my list, as it’s rolled in paprika. It’s an aged cheese, giving it a hard texture and a tangy taste. Añejo Enchilado is an even more aged version that packs an even more distinct flavor. It’s often used (not surprisingly) in enchiladas!

Typically found already shredded and made with cheddar cheese for Tex Mex recipes.

Do Authentic Mexican Tacos Have Cheese?

You’ll often see Monterey Jack and Cheddar cheeses in Tex-Mex recipes, but you won’t find it in authentic cuisine. The two most commonly used for cooking in Mexico is queso fresco and queso Oaxaca. It’s a good way to determine whether the recipe that you’re working from is traditional or not!

What Cheese is Most Used in Mexico?

Cotija cheese is one of the most used varieties in Mexico. You’ll find it in several different recipes such as enchiladas, tacos, beans, salads, and soups. It’s a white crumbly variety with a similar flavor and texture to feta.

What Cheese is Closest to Mexican Cheese?

If you’re in a pinch and don’t have access to any of the cheeses on my list, you should substitute with Monterey Jack and/or Cheddar. Both kinds of cheese have similar consistencies, textures, and tastes to some of the cheeses above. Queso Asadero, Chihuahua, and Oaxaca feature more or less the same flavor profiles as Monterey Jack and Cheddar and can be used interchangeably.

Oaxaca, Manchego or Panela would be my first guesses Lisa. I really have no idea.

In my Queso Blanco recipe I use the Oaxaca cheese. It’s THE best for melting and especially good in quesadillas Karen.

The link for Mexican Crema didn’t work. I also searched the site and didn’t find it. Am I overlooking something?

It published today Shelia! Please try again or refresh your browser? Thanks for following along. 🙂

Wow I sure learned a lot, that I had no idea about thanks, Kevin

So many great cheeses and flavors, right? Thanks for following along Dave!

This is great! Is it available in a PDF format?

You could send the page itself to your printer and then there should be a choice for the PDF format. Currently there is not PDF made for this post, sorry Roxie. Thanks for following along! 🙂